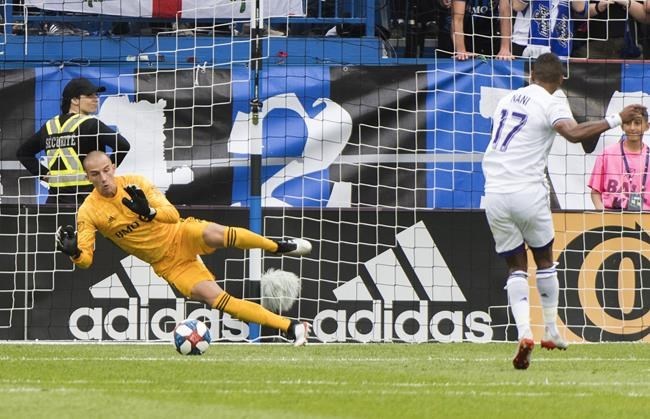 MONTREAL — Goalkeeper Evan Bush believes the Montreal Impact have yet to realize their full potential.

Sitting second in the MLS Eastern Conference, the Impact (9-7-3) could go to the top of the table with a victory against defending champion Atlanta United FC (8-6-2) on the road on Saturday.

Montreal is two points behind Philadelphia in the East.

"I don't think this is who we are. We have a lot more," Bush said. "The amount of road games that we played to start the season, the injuries that we've had to some very key pieces, all those things combined, there's a lot more for us to attain.

"Whether that's first place or a top seed in the playoffs, those things need to be our goal. When we get our full group back, we'll be able to make a much stronger run here.”

The Impact have had their fair share of adversity this year.

A daunting road schedule saw Bush and his teammates play eight of their first nine games away from Saputo Stadium.

Players away on international duty have frequently forced coach Remi Garde to juggle his roster. Samuel Piette, Zachary Brault-Guillard, Daniel Lovitz and Omar Browne are currently at the Gold Cup. Midfielder Michael Azira is at the African Cup of Nations.

And then there were other issues: Harry Novillo losing his passport, the airport fiasco going to New England, and the impromptu rebuilding of the team's natural grass practice field over two months.

All those factors could have easily derailed Montreal's 2019 campaign. Instead, Garde's men remain in the thick of the playoff race in the East after 19 games. This time last season, the Impact were ninth in the standings.

"We've scrapped and we've clawed for the points that we've had so far this year," said Bush, who has 42 saves and six clean sheets this season. "We've been able to find ways to get points and get results. At the start of the season, we always said we wanted a top-four seed so we get a home game in the first round. That's still our goal.”

Montreal is coming off a 2-1 win at home against the Portland Timbers on Wednesday. Okwonkwo scored twice, including a sensational spin-o-rama volley goal in the 66th minute for the winner.

That match was the first for Montreal after a three-week break. Now, the Impact play twice in four days. Garde is expected to rotate his lineup slightly as a result, with substitutes Mathieu Choiniere and Novillo likely getting starting roles.

Fourth-place Atlanta , meanwhile, is coming off a dramatic 3-2 loss in Toronto on Wednesday. After TFC scored a stoppage-time penalty to take the lead, Atlanta was awarded a penalty of its own but midfielder Pity Martinez missed the net.

The reigning MLS champions had won their previous four matches in all competitions.

"We need to recover 100 per cent," said Impact striker Maximiliano Urruti, who is sitting on one goal this season. "Atlanta plays very well in Atlanta. We need to stay focused and play the same way we played yesterday (Wednesday). It's very important.

“We need points, one point or three since we're away. Atlanta is an amazing team. Our team is very confident right now. We just got three points at home, in front of our fans, and now we go to Atlanta for another three points.”

STRUGGLES IN ATLANTA: The Impact are winless at Mercedes-Benz Stadium, where they are 0-2-0 all-time.

SHUTOUT STREAK: Atlanta United has not conceded a goal at home in MLS in five consecutive matches (456 minutes). The defending champs last gave up a goal at home on April 20.

GOLD CUP: While the Impact play Atlanta on Saturday, Samuel Piette and Zachary Brault-Guillard will represent Canada in the Gold Cup quarterfinal against Haiti in Houston.