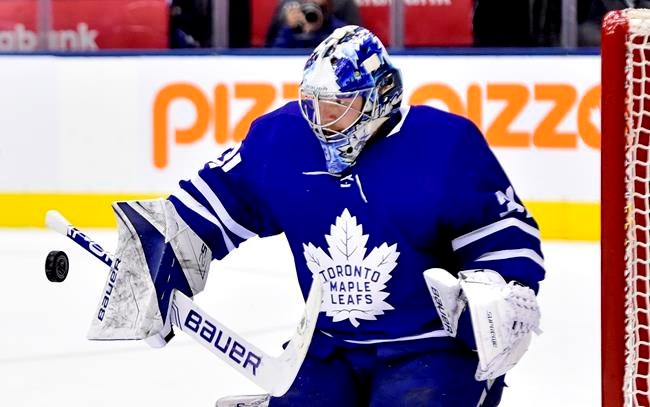 TORONTO — The fans left happy after a back-and-forth game Mike Babcock deemed "way too entertaining for the coach."

And his team won.

Trailing 2-1, the Maple Leafs scored three goals in four minutes late in the second period Wednesday to pull ahead of the Ottawa Senators. Auston Matthews, fresh off news of a contract extension, scored what had looked to be the winning goal at 3-2 while Mitch Marner set up two others to press his case for a lucrative new deal.

But Ottawa pulled even at 4-4 early in the third on goals by Thomas Chabot and Magnus Paajarvi, with his second of the night, in a stretch of three minutes 19 seconds.

Morgan Rielly scored the winner midway through the third period for a 5-4 win.

"We were playing well and then we just got careless and we never really seemed to be able to get it back," lamented Babcock, who liked his team's start.

"At the same time when you're a good team and you win games, sometimes they're not very pretty but you still won them. So at the end, when we get up (Thursday) in the standings, it's going to look pretty good."

Rielly started the rush after a Sens turnover. After racing up the ice, he passed to Zach Hyman, whose backhand pass found Rielly alone in front of the goal for his 14th of the season at 9:12. It was also Rielly's career-high 53rd point of the season.

"It's a blast playing with him ... He's a great guy to go to battle with every day," said Leafs centre John Tavares.

The Sens piled on the pressure with the goaltender out but could not score.

Andreas Johnsson, Hyman and Tavares also scored for Toronto. Matt Duchene had the other Ottawa goal.

Added Tavares: "They pushed back hard. Give them credit."

"I thought we carried the play for most of the game," said Ottawa coach Guy Boucher. "Just a few puck management turnovers cost us."

Boucher thought his team, up 2-1, should have put the game away in the second period but could not convert good scoring chances.

"That was the moment. When you play a team like that and you've got them on the ropes, that's the moment where you've got to bury them," said Boucher.

The Leafs came into the game flushed with news of Matthews' US$58.2 million, five-year contract extension.

"Welcome home Auston," said one sign in the stands. "Drink$ on you?"

Matthews opened his NHL account against the Sens on Oct. 12, 2016 at Ottawa where he set a league record for goals scored in an NHL debut (4).

Marner, the Leafs' leading scorer with 65 points, upped his assists total to 45. It was his 14th multi-assist and 20th multi-point game of the season.

The 21-year-old winger, who is eligible to become a restricted free agent July 1, is next on GM Kyle Dubas' to-do list. Babcock has no doubts it will get done. "Mitch is a lifetime Leaf," he said after the morning skate.

Ottawa has contract questions of its own. Duchene, Mark Stone and Ryan Dzingel are all eligible to become unrestricted free agents on July 1.

Senators owner Eugene Melnyk says he is prepared to open his wallet.

According to a club release, Melnyk told a Sens corporate event Tuesday in Toronto that the team's "current rebuild is a blueprint on how to bring the Stanley Cup home to its rightful place in Ottawa."

He pledged the team will spend close to the NHL's salary cap every year from 2021 to 2025.

The Battle of Ontario was a mismatch looking at the numbers. Going into play Wednesday, the Leafs ranked sixth in the league. Ottawa was 31st, some 24 points below Toronto. But Ottawa had won six of its last seven visits to Scotiabank Arena.

It was Craig Anderson versus Freddie Andersen in goal. Ottawa's Anderson was playing his 599th NHL regular-season game.

The Leafs started on time, outshooting the Sens 8-1.

Johnsson started the Leaf comeback in the second period, taking a puck that came off the end board and beating Anderson with a backhand to tie it at 2-2 at 14:20. Johnsson was coming off a four-point night (two goals, two assists) in a 6-1 win Monday over Anaheim.

Matthews put the Leafs back in the lead, dragging the puck past a sliding defenceman only to lose the handle. When Jean-Gabriel Pageau couldn't control it, Matthews got the puck back and poked it in for his 24th of the season at 16:29.

Marner was the provider again, outwaiting defenceman Ben Harpur to fire a perfect pass for Tavares to tap-in for his 32nd of the season at 18:20 for a 4-2 lead.

Ottawa outshot Toronto 16-12 in the second period and 17-7 in the third. Andersen, who made some eye-popping acrobatic saves, is 3-1-0 this season when stopping at least 40 shots.

It was NHL game No. 500 for newly acquired Leafs defenceman Jake Muzzin, who has won over fans in Toronto with his physical play and booming shot.

There was also history in the broadcast booth with 85-year-old Bob Cole calling the game. A video tribute during the first period drew a standing ovation from the crowd of 19,264. It's Cole's 50th and last season.

The Leafs head out for a six-game road trip that will take them to Montreal, New York (Rangers), Colorado, Las Vegas, Arizona and St. Louis.