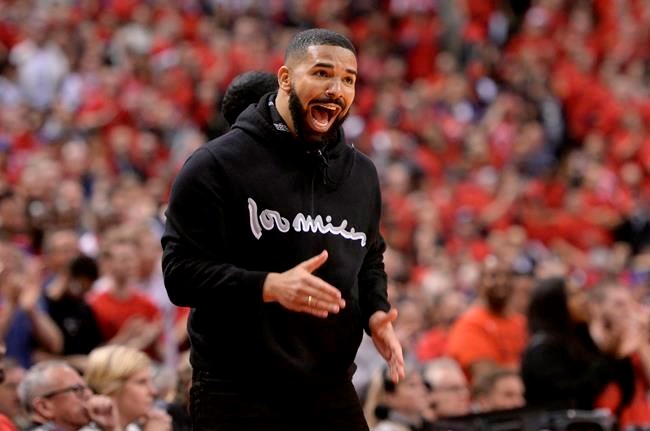 "Certainly we don't want fans — friend or foe — contacting an NBA coach during a game," Silver said Thursday evening when asked about Drake's behaviour during games.

Even though Nurse said he hadn't even noticed the shoulder rub, Silver said "those can lead to dangerous situations.

"When you're in the middle of coaching a game and you're completely focused, you obviously don't want somebody who's not on your team touching you," he told a news conference prior to the Raptors beating the Golden State Warriors 118-109 in Game 1 of the NBA Finals.

But Silver handled the matter diplomatically, saying the league appreciated Drake's "super-fan status and I know he's beloved in the community of Toronto."

"We understood that in this case, given Drake's relationship to the team, it's not the same as just any fan who happened to be courtside touching a coach," Silver added. "But I think that's an absolute bright line that we have to draw. So that's one example and I would also say that I think the issue for the league is that he has this ambassador-type role with the team. So he is viewed a little differently than any fan sitting there.

"But at the same time I think there are appropriate lines that shouldn't be cross in terms of how a competing team is addressed or the officials for that matter."

Silver said the league office "had conversations directly with Drake and his manager and I think we ended up in a good place."

Drake was front and centre again Thursday, sitting in his courtside perch ahead of tip-off. He was wearing a signed Dell Curry No. 30 Raptors shirt, in honour of the father of Golden State star Steph Curry. And perhaps also a dig at his son.

Dell Curry laughed as he noticed the shirt while taking his seat nearby.

Drake also wore a Nike wristband on his left bicep just above the elbow, apparently to cover up small tattoos dedicated to both Steph Curry and injured Warriors teammate Kevin Durant.

He has a No. 30 and a No. 35 inked on his arm. Below Curry's 30 is the word "gifted" and above it a small halo. The 35 for Durant has the word Snipe under it (easymoneysniper is Durant's Instagram handle).

Drake has more than two dozen tattoos, including two CN Towers and a Houston Astros logo (he's a fan of the city).

The rapper was largely quiet in the first half but jumped to his feet in the second quarter to protest a Steph Curry foul that floored Fred VanVleet when he was hit by a trailing arm. An irate Drake made an elbowing motion, to show officials his take on what had just happened.

Golden State's Andre Iguodala almost took Drake out when he dove into the crowd after trying to retrieve a ball. The six-foot-six, 215-pound Warrior went over a fan just to Drake's left.

After halftime, Drake returned to his seat four minutes into the third quarter. One of the referees came over for a short chat during a timeout in the third.

He was a model citizen for most of the second half, although he did jaw at Klay Thompson after the Warriors guard was hit with a technical foul in the fourth quarter. An animated Drake spent the end of the fourth quarter on his feet, seemingly directing some shade at the Golden State bench.

The league also got involved during last season's playoffs when Drake got into a jawing match with then-Cleveland Cavalier Kendrick Perkins. Security had to step in on that occasion.

Drake's behaviour in Game 4 against the Bucks was criticized by Milwaukee coach Mike Budenholzer.

"There's certainly no place (on the court) for fans and, you know, whatever it is exactly that Drake is for the Toronto Raptors,'' Budenholzer told reporters during the series.

"There's boundaries and lines for a reason," he added

Drake stuck to his space for Game 6 of the Bucks series but celebrated on the court afterwards with players and team officials.

The team's global ambassador casts a long shadow, with 38.2 million followers on Twitter and 575 million on Instagram.