Not the rocket man, HFX Wanderers midfielder Elton John is the soccer man 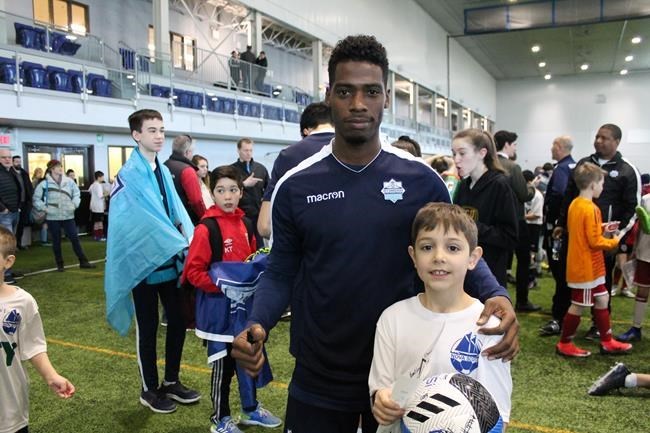 HFX Wanderers FC boasts the biggest name in the Canadian Premier League even if the fame has to be shared.

Midfielder Elton John is used to the attention his name brings.

"It's easy for me to get in the spotlight if I really think about it. I'm kind of piggy-backing off his name. But it's two different characters. He's a great singer, obviously. And I'm still trying to make a name for myself as well."

John is a fan of his namesake's music, growing up a fan of John's "Circle of Life" from "The Lion King." These days, he's probably listening to Soca, rhythm and blues, and rap.

His mother is the real Elton John fan, however.

"I think she liked the music and probably said 'I'll name him Elton (because) he's already a John,'" he said with a chuckle.

A holding midfielder, the 32-year-old from Arima, Trinidad, can also play centre back.

The Trinidad connection is strong on the Halifax team thanks to Trinidad-born head coach Stephen Hart, who has coached both the Canada and Trinidad national teams. Wanderers assistant coach Derek King was part of Hart's coaching staff in Trinidad and was a club coach.

John won league and cup titles with Williams at Trinidad's Central FC, also winning titles with North East Stars FC — where he was captain under King and played with Garcia —and San Juan Jabloteh FC.

John, who also played club football in Belgium, has represented Trinidad and Tobago at both youth and senior levels, winning five senior caps.

"I basically won everything in my country, in the league that I played (in) so I was up for a new challenge," he said, when asked about the move to Canada.

"And I was open to it because I know what it stands for and I believe I could come and add to what they're trying to build," he added.

John, who had never been to Canada before, has already been won over by Halifax.

"From the first day I came it was very welcoming. I mean it was a bit cold — I'm accustomed to the heat — but from the backroom staff to the coaches, everyone has been great."

"It's wonderful. I can see almost the whole city," he said enthusiastically.

Married with two young daughters, he has been doing his best to stay connected via FaceTime while working on plans to have the family join him.

Williams, a goalkeeper, has won 80-plus caps for Trinidad and Tobago and played professionally in Belgium, Hungary, Honduras and Guatemala. Rampersad, John's roommate in Halifax, won a Trinidad league title with FC Santa Rosa under King.

Halifax's next game is Saturday against visiting Forge FC (0-0-1).