Notre Dame beats Stanford to get back to Final Four 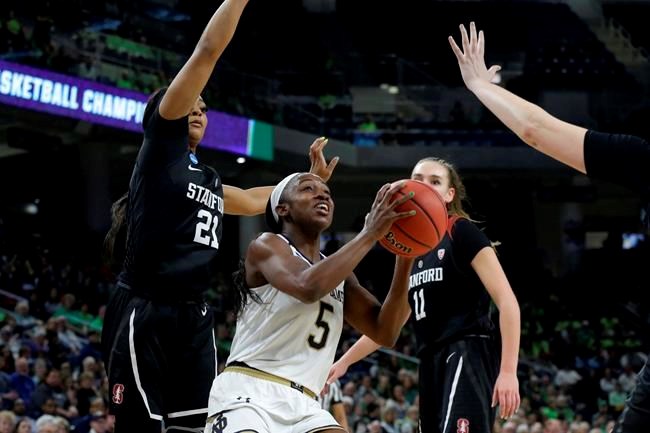 CHICAGO — Trailing by seven after missing too many shots in the first half, Notre Dame saw no reason to be rattled.

The Fighting Irish figured they had only themselves to blame, that they would get on a roll and it just might carry them all the way back to the Final Four.

"They kept their composure," coach Muffet McGraw said. "I didn't see a lot of frustration out there."

The top-seeded Irish (34-3) got some payback for tournament losses to the second-seeded Cardinal (31-5) in 2016 and 2017 and earned their ninth trip to the Final Four.

They will face UConn in Tampa Bay on Friday in a semifinal rematch from last year, when they beat the Huskies and then Mississippi State on last-second shots by Arike Ogunbowale to claim their second NCAA title.

Young scored seven points in an 11-2 run to end the third quarter that gave Notre Dame a 52-46 lead.

Ogunbowale finished with 21 points on 6-of-19 shooting, and the Irish pulled away in the second half for their 13th straight win after struggling to get their high-powered going in the first half.

"I think as a team collectively we just talked about (how) we have 20 more minutes to get back to the Final Four," Ogunbowale said. "And a lot of the mistakes and reasons that we were down were us. ... We knew the shots were going to be able to fall the second half, because the first half was rough. But if we just held on , it would get us back in the game. And with our shots falling, we could take the lead."

Kiana Williams led Stanford with 20 points. Dijonai Carrington scored 18. Alanna Smith added 14 points and eight rebounds. But instead of advancing to the Final Four for the 14th time, the Cardinal came up short after winning their previous 12 games.

"This is a really, really close team, a really fun team, and I'm very proud of (them)," coach Tara VanDerveer said. "Only one team is going to be really happy at the end of the day, and I'm really proud of this team. And I don't think that one game should define — or even 20 minutes should define — the season for them. They've had a great year."

Young's scoop layup put Notre Dame on top 45-44 with just over two minutes left. She also drove for a layup in the closing minute to get the lead back up to six after Carrington made two free throws for Stanford.

Young added two baskets early in the fourth before Ogunbowale tracked down a loose ball and broke for a three-point play, making it 59-48 with 7:47 remaining.

The game was just the sixth between two storied programs that each have Hall of Fame coaches and two NCAA championships. But it marked the fourth time in five years they were meeting in the Sweet 16 or Elite Eight.

Notre Dame beat the Cardinal in the regional semifinals in 2015 with Stanford returning the the following season. The Cardinal knocked out the Irish in the 2017 Elite Eight, wiping out a 16-point deficit in the second half on the way to a 76-75 victory. Smith scored the go-ahead layup with 23 seconds remaining and Erica McCall swatted a last-second drive by Ogunbowale from behind to send Stanford to the Final Four.

As the final seconds ticked away in this one, a large contingent of Irish fans chanted "We are ... ND! We are ... ND!"

McGraw had two of her sisters and two college teammates in the crowd.

"They were all here, so that was quite a nice crowd for me," she said. "I'm so appreciative of the support that I get from people because they really helped me get through a long season."

Notre Dame's starting five of Ogunbowale, Young, Marina Mabrey, Jessica Shepard and Brianna Turner became the first in the women's or men's games to combine for 10,000 career points. They had 78 in the game, giving them 10,070 in all.

Stanford: After shooting a season-low 25% while outlasting Missouri State 55-46 in the Sweet 16, Stanford was a little better in this one at just under 40%. But the Cardinal didn't make enough baskets to keep the season going.

Notre Dame: Even though they were out of sync in the early going, the Irish did enough down the stretch to come away with the victory.