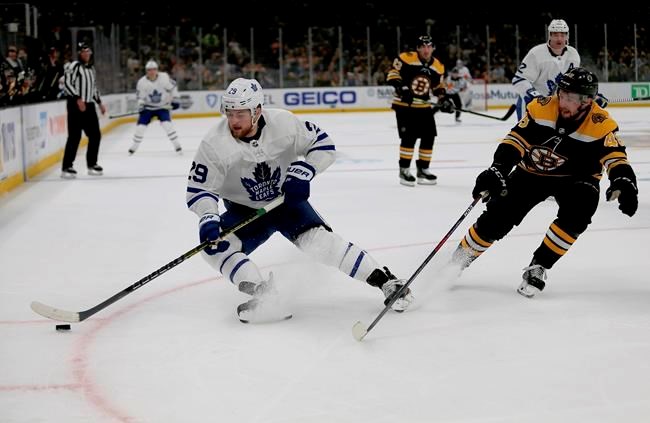 TORONTO — William Nylander will take Nazem Kadri's place at centre on Toronto's third line behind John Tavares and Auston Matthews when the Maple Leafs host the Boston Bruins in Game 3 of their first-round series Monday.

Nylander slid over from the wing to set up shop between Patrick Marleau and Connor Brown at the morning skate.

The move isn't unfamiliar for the 22-year-old, who also shifted to the middle earlier this season when Kadri was out injured.

"He's got to compete at a high level with and without the puck."

The NHL suspended Kadri for the rest of the series on Monday for the centre's cross-check to the head of Bruins winger Jake DeBrusk. The offending hit came in the third period of Boston's 4-1 victory in Game 2 that tied the series 1-1.

The Leafs centre was banned three games for boarding in the opener of last spring's series with the Bruins, and is facing his eighth hearing with the league since 2013. All four of his previous suspensions involved contact with an opponent's head.

"He's obviously gritty, a guy who does it right, a big part of the team," Matthews said. "We need other people to step up. We've lost him before. We feel like depth on this team is something we have and we can take advantage of."

Nylander, who had just seven goals in 54 games following a contract dispute that stretched into December, scored in Toronto's 4-1 victory in Boston in Game 1.

But he wore goat horns in Game 2, losing the puck at the side of Toronto's net for an easy Boston tap-in that made it 3-0 in the second period.

"I don't know, it just kind of bounced off my stick and took a weird bounce," Nylander said. "It ended up in the net, which was tough. Got to forget about that and move on."

Kadri's absence also means Tyler Ennis will draw in on Toronto's fourth line with Frederik Gauthier and Trevor Moore for his first playoff action for the Leafs.

"As a line, we've always tried to use our speed and get to pucks first and just create a lot of energy and outwork the other lines," said Ennis, who had 12 goals in 51 games in the regular season. "It's going to be the same game plan, the level's just going to be ramped up because it's playoffs.

"It's going to be a fun challenge."

Game 4 goes Wednesday in Toronto before the series switches back to Boston's TD Garden for Game 5 on Friday.