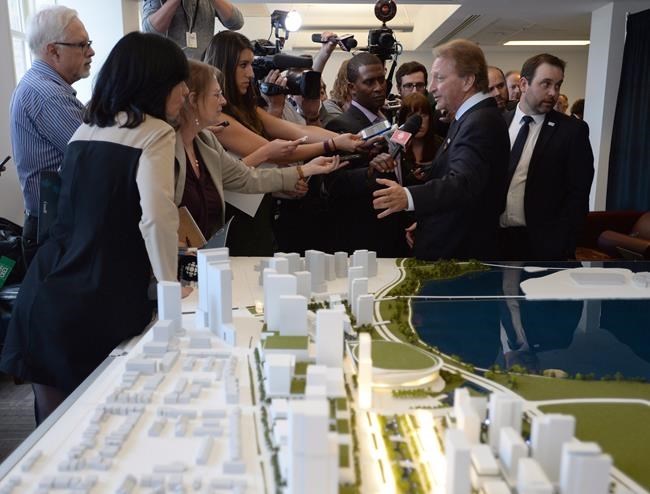 Ottawa Mayor Jim Watson has expressed disappointment in Senators owner Eugene Melnyk now that a proposed new downtown arena for the NHL team is in jeopardy.

Speaking after the National Capital Commission announced on Wednesday that no settlement could be reached on the LeBreton Flats file in mediation, Watson said Melnyk did not help the cause with some of his comments.

"I said earlier today one of the frustrations I think in this partnership was Eugene Melnyk (and) the very fact that during the NHL outdoor (game at TD Place in Ottawa in 2017), or just before that, was musing about not even going downtown," said Watson, who also is a non-voting member of the NCC board.

"I was pretty livid with him back then. I said 'Wait a minute. You're putting a lot of time, effort and money into this process and you come out and just muse off the top of your head, 'Well, I'm not interested in moving downtown.'

"The whole purpose was because you wanted to move the arena downtown because there's no walk-up traffic in Kanata (home of the Senators' current arena, the Canadian Tire Centre). You need that kind of walk-up traffic and transit connections to make the arena successful like all arenas in North America are in the downtown core."

The new arena was part of the RendezVous LeBreton Group's proposal for the land controlled by the NCC.

Judge Warren Winkler, the mediator retained by RendezVous, advised the NCC that no settlement could be reached prior to Thursday's deadline.

Melnyk's Capital Sports Management Inc., filed a $700-million lawsuit against Ruddy and Bird in November. Ruddy — also a member of the ownership group of the CFL's Ottawa Redblacks, the United Soccer League's Ottawa Fury and the Ontario Hockey League's Ottawa 67's — responded with a $1-billion counterclaim.

While filing a statement of defence against Melnyk's lawsuit, Bird got the three parties to agree to mediation in early January.

"We looked to mediation as our best opportunity to address and resolve these concerns," Melnyk said in a statement. "We participated in the process to the very end.

"We are devastated that our dream has been shattered. However, we will not let our vision die or allow our enthusiasm to be diminished by this ill-fated experience. ... We are here for the long term and want a world class venue where Ottawans will live, work, play and enjoy the best the city has to offer. The people of Ottawa deserve this."

"While I am disappointed the mediation concluded without success, I would urge the National Capital Commission to move forward on the redevelopment of LeBreton Flats — regardless of whether Trinity Group plays a role or not — given the importance of this redevelopment to our community," Ruddy said.

Bird declined comment. NHL deputy commissioner Bill Daly said in a statement that the league "continues to support Mr. Melnyk’s efforts to find a solution for the long-term future of the Senators in Ottawa."

The NCC board of directors will hold a teleconference on Thursday to review the file. The crown corporation says it will hold a meeting on March 7 to finalize the process for the redevelopment of LeBreton Flats.

Watson wasn't ready to eliminate the possibility of an arena being built at LeBreton.

"One of the things that's been talked about in the past is that if you don't have the Senators involved, you save the equivalent piece of land for an arena or some other institute of national significance that it can be used (for) and then (Melnyk) might realize that he should be downtown and make overtures to whoever wins the next proposal bid," Watson said.

The founder of the Senators offered a different suggestion when asked about the future of the NHL's last-place team.

"Reboot the arena (in Kanata) and improve the team," Bruce Firestone said. "Winning cures a lot. Ottawa is a great hockey town. ... Really, this is a tough time for (the) team, there's no question."

Firestone said he approached the NCC about a downtown arena some 30 years ago and was told the plans for that land "did not include a hockey rink, even if it's a very nice hockey rink." So he looked at various other potential sites before settling upon Kanata.

"Our first choice was LeBreton so I was pretty excited when the RendezVous LeBreton plan came out," Firestone said. "I think it's a world-class plan. RendezVous LeBreton wasn't just important for the hockey team, I think it's important for the city and I think it was the best plan and the fact that it's no longer on the table, at least as of today, I think that's a big loss for not only the franchise but also for the city."

The NHL team has dealt with a long list of negative headlines for on- and off-ice developments since falling one goal short of reaching the Stanley Cup final in 2017.

The Senators traded away top forwards Mark Stone, Matt Duchene and Ryan Dzingel for younger players and draft picks before this week's trade deadline after being unable to come to terms on new contracts for the pending unrestricted free agents.

Ottawa also dealt its first pick in this year's draft — expected to be very high because of the team's poor record — in the original deal to get Duchene last season.

The Senators lost 7-2 to the Washington Capitals on Tuesday night, Ottawa's fifth defeat in a row.

"When it rains, it pours," Watson said. "It's been a really bad time for them. They're in the basement of the standings, they've traded away three of their best players and now this. It's hasn't been a good stretch of time, but I'm not giving up on the Senators. I think we have to continue to support the team because, obviously, they bring a lot to the local economy, the tourism industry, the spirit of the city. When they're winning, everyone's on the bandwagon so let's not take this big disappointment that the city and citizens will face and start blaming the team and the players."

— With files from Danielle Edwards in Ottawa and Dan Ralph in Toronto.