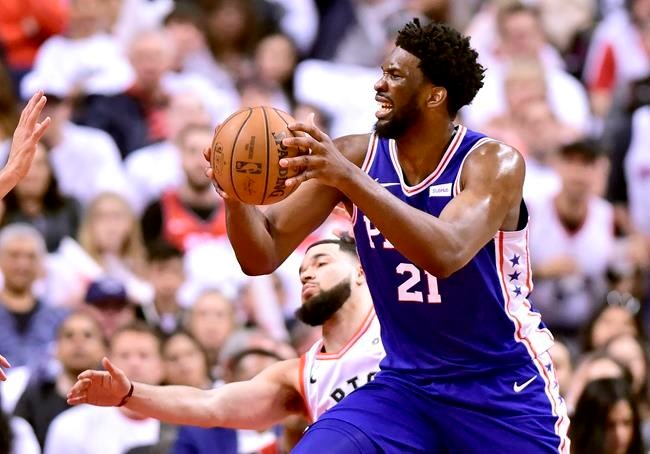 TORONTO — Philadelphia big man Joel Embiid didn't mince words when asked about the bout of gastroenteritis he battled before Monday's 94-89 win over the Toronto Raptors.

"Man, if you've had it before, you would know how it feels," he said, after breaking up teammate Jimmy Butler next to him at the podium with a more colourful description of the end product of the stomach ailment.

"But these are my guys and you know (you) want to show up every night and play hard."

Embiid missed the morning shootaround and was listed as probable with the team offering little in advance.

"We still have no official word what his status is," coach Brett Brown said 90 minutes before tipoff.

Embiid took some shooting drills prior to the game and came out late for warmup. He was introduced to boos from the Scotiabank Arena crowd.

Brown said later that Embiid was hooked up to an IV prior to the game at Scotiabank Arena as he studied video of the Raptors.

The seven-footer, who averaged 27.5 points a game during the regular season, finished with 12 points on 2-for-7 shooting, "which is definitely not Joel," said Brown, who then listed off several key plays by his centre.

Double-teamed late in the game, Embiid found Butler "for a huge three" that gave the Sixers an 88-81 lead with 2:14 remaining.

After Toronto cut the lead to 90-89 with 46.7 seconds left, Embiid got the ball at the top of the key, showed Marc Gasol a pump fake and then steamed to the basket where he managed to extricate himself from three Raptors defenders and sink a shot from close range for a 92-89 lead.

Embiid, a mountain of a man, finished as one of five Sixers in double figures.

The start had looked considerably bleaker for Philadelphia, which committed two turnovers before it scored its first points.

Embiid didn't get on the scoreboard until late in the first quarter, sinking two free throws with 1:41 remaining. His first field goal attempt was a failed three-pointer with 8:39 remaining in the second.

He scored his first bucket with 8:46 remaining in the third.

On a night where his body was not helping, he made all eight free throws, pulled down six rebounds, recorded five assists, one blocked shot and six turnovers in 32 minutes. He also helped frustrate Pascal Siakam, who was held to 21 points on 9-of-25 shooting.

Embiid came into the contest averaging 25.4 minutes per game in his first five games of the post-season, compared to 33.7 minutes during the regular season.

He missed Game 3 of the Sixers' opening-round series against Brooklyn because of tendinitis in his left knee. He sat out 18 games in the regular season, mostly due to the knee.

On Monday night, Butler did most of the heavy lifting on offence with 30 points with Brown praising his maturity.

"This was James Butler. That was the adult in the gym ... He was just a tremendous rock," said Brown. "He willed us to a lot of different situations."

"He was a stud. He really was an adult in the gym," he added.

Apprised of the comment, Butler drew laughter when he said: "My name isn't James. It literally is Jimmy."

The Sixers had lost 14 straight in Toronto. Tied 1-1, the series now switches to Philadelphia for Game 3 Thursday.