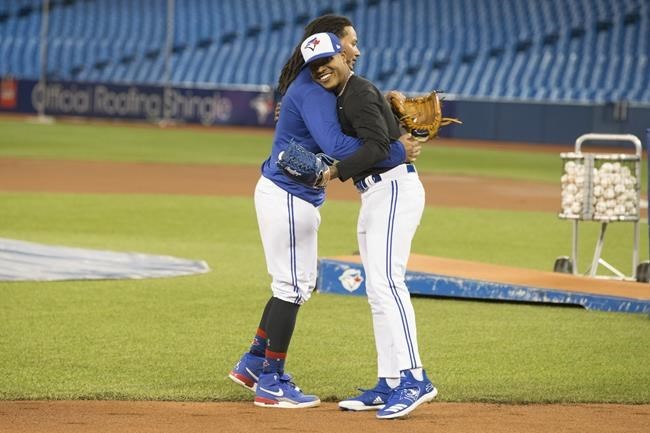 TORONTO — The Blue Jays begin the regular season Thursday at home against the Detroit Tigers. While a couple of roster spots have yet to be announced, here's a position-by-position look at the team Toronto is projected to field on Opening Day:

RHP Marcus Stroman — Stroman is Toronto's Opening Day starter for the second time in his career. The 27-year-old had a sub-optimal season by his standards in 2018, pitching just 102 1/3 innings to a 4-9 record and a career-high 5.54 earned-run average. Stroman said early this spring training that he was hampered by a shoulder injury last year that never fully healed.

RHP Aaron Sanchez — the 26-year-old is hoping to finally put his finger issues behind him as he embarks on his sixth major league season. Sanchez dealt with blister problems throughout 2017, limiting him to just 36 innings, and a separate finger injury last year kept him from performing at his peak. The Jays are hoping to see a resurgence of the Sanchez of 2016, when he led the American League in ERA (3.00).

RHP Matt Shoemaker — Shoemaker signed a one-year deal with Toronto this off-season and the 32-year-old is hoping to rebound from a down year with the Angels last season. Shoemaker started just seven games (lasting just 31 innings) with L.A. in 2018, missing significant time with a split pronator tendon in his throwing hand that required surgery. Shoemaker ended the season 2-2 with a 4.94 ERA.

LHP Clayton Richard — The veteran left-hander was acquired in an off-season trade with San Diego. He has spent most of his 10-year career in the National League and was 7-11 with a 5.33 ERA with the Padres in 2018.

RHP Trent Thornton — Manager Charlie Montoyo announced the rookie Thornton had cracked the major league rotation on Tuesday, allowing the 25-year-old to make his major league debut while Toronto awaits the return of injured pitchers Ryan Borucki and Clay Buchholz. The Jays acquired Thornton in an off-season trade with Houston. He was drafted by the Astros in the fifth round in 2015.

Danny Jansen — The Blue Jays will have a new catcher start Opening Day for the first time in four years following the off-season trade of Russell Martin to the Dodgers. That move paves the way for Jansen to shine over a full season. Jansen, 23, made his MLB debut last August and batted .247 with three homers, six doubles, nine walks and 17 strikeouts over 31 games. He will serve as Toronto's No. 1 catcher, with Luke Maile as his backup.

Justin Smoak — the 32-year-old veteran will be looking to build on a solid 2018 season as he enters his free-agent year. Smoak hit 25 homers, drove in 77 runs and was voted the Blue Jays player of the year last season by the Toronto chapter of the Baseball Writers Association of America.

Lourdes Gurriel Jr. — A spring training knee injury to Devon Travis leaves Gurriel as the primary second baseman to start 2019. Gurriel batted .281 through 65 games with Toronto last year. The 25-year-old from Cuba had a great end to 2018, putting up an 11-game multi-hit streak. That was the longest such stretch by a rookie all-time, and the longest in Blue Jays history.

Freddy Galvis — The 29-year-old signed a one-year deal with Toronto this off-season to provide some stability and durability to the middle of the infield. Galvis played all 162 games for San Diego last season, and all 162 for the Phillies the year before that. While he won't be seeing that much action with Toronto, he still provides a sure-handed option at shortstop that can be moved in and out of the lineup as the Blue Jays work around the inevitable debut of top prospect Vlad Guerrero Jr.

Brandon Drury — acquired last season as part of the trade with the Yankees, Drury will start the season with a firm grasp on the third base job until Guerrero returns from an oblique injury and can be called up from the minor leagues. Drury missed time with a hand injury shortly after joining the Jays last July and played just 26 games total between New York and Toronto in 2018. He hit .169 with a .256 on-base percentage over that stretch.

Centre-fielder Kevin Pillar and right-fielder Randal Grichuk are back to provide veteran leadership to a much more youthful team than the ones Toronto has fielded in recent years. Joining them in the outfield will likely be a platoon of Teoscar Hernandez and Billy McKinney, another acquisition from the Yankees last season. Hernandez has struggled defensively through his major league career but his bat has been explosive at times, and he had a good spring training offensively.

Undetermined — This position was held down by switch-hitter Kendrys Morales until Wednesday, when he was traded to the Oakland Athletics in a deal less than 24 hours before Toronto's home opener against the Detroit Tigers. The Morales trade gives the Blue Jays some roster flexibility, with a number of players able to jump into the DH/1B role. Rowdy Tellez and Teoscar Hernandez could slide into that spot in the lineup. Billy McKinney saw some time at first base this spring, allowing for Smoak to DH, and outfielder Anthony Alford could also join the team

Closer Ken Giles, who the Jays acquired from Houston last season in the Roberto Osuna trade, cements the back end of Toronto's bullpen this season. The 28-year-old finished 2018 with 26 saves, including 14 with Toronto in the second half of the year. Tim Mayza, Sam Gaviglio and Joe Biagini are returning from last year — with Gaviglio serving as the long man — and newcomers Bud Norris, Daniel Hudson and 19-year-old Rule 5 pick Elvis Luciano are poised to join them. The Blue Jays' relief corps took a hit this training camp with Ryan Tepera and John Axford both suffering elbow injuries.

Richard Urena — the utility infielder beat out newcomer Eric Sogard for his spot on the roster. Urena, 23, can play shortstop, second and third base and has a .257 batting average and .311 OBP over two seasons (61 games) with the Blue Jays.