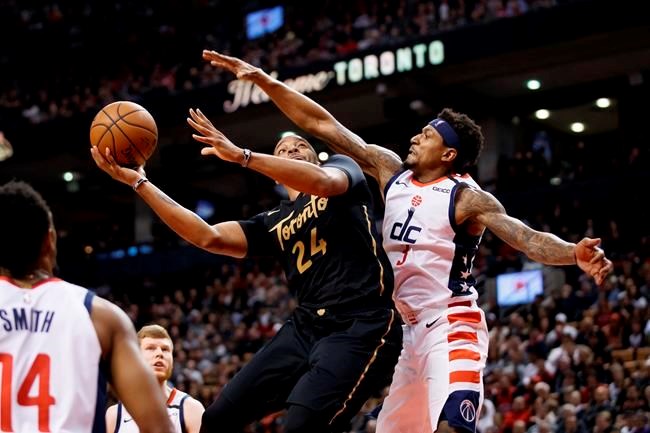 TORONTO — The Toronto Raptors are finally getting healthy. And starting to impose their will at both ends of the court.

After running up 130 points midweek in a nine-point win in Oklahoma City, Toronto (27-14) tied a franchise scoring record Friday in thumping the Washington Wizards 140-111 before a sellout crowd of 19,800 at Scotiabank Arena.

The Raptors also scored 140 in a double-overtime two-point win over the Wizards on Jan. 13, 2019. Friday set a franchise record for most points in regulation time. Toronto also made a club-record 22 three-pointers — on 43 attempts — and tied a season-best with 16 steals.

Unlike the win over the Thunder, when Toronto nearly blew a 30-point lead, and the 105-104 loss to visiting San Antonio last Sunday when the Raptors let an 18-point lead slip away, there was no late drama this time.

It was all Toronto with Washington's lone lead (3-2) coming in the first minute of the game.

Norman Powell had 28 points off the bench, his third 20-point-plus performance since returning from a shoulder injury.

The Raptors forced 28 Washington turnovers and scored 34 fast-break points. On offence they moved the ball selflessly (albeit with 19 turnovers of their own), registering 34 assists — their fourth straight games with at least 30 assists.

Seven Raptors also scored in double figures as Toronto extended its winning streak over Washington to seven games — and won its fifth straight at home over the Wizards. Since 2014-15, Toronto is 17-3 against Washington during the regular-season.

"I think defensively is what's clicked," said Marc Gasol, who added a season-high 20 points. "We create a lot of turnovers. That allows us to run and create easy buckets and it kind of creates that momentum for us ... I think it starts defensively for us."

Troy Brown Jr. led Washington (13-28) with 22 points as the Wizards lost their third straight and 11th in their last 16.

"We didn't play well, we turned the ball over," lamented Washington coach Scott Brooks. "We played against a championship team that was clicking on all cylinders."

Leading 100-76 after three quarters on Gasol's fifth three-pointer of the game at the buzzer, Davis increased the lead to 27 with a three-pointer and scored the Raptors' first seven points of the fourth.

Toronto had yet another injury scare when star guard Kyle Lowry hobbled to the locker-room with 2:38 remaining in the first quarter after a collision with Jordan McRae while trying to take a charge. He left favouring his right leg but was soon back on the bench.

Lowry, his right knee wrapped, returned to the fray with 7:15 remaining in the second quarter. His movement seemed a little sticky but it didn't stop him from sinking a long-distance three off-balance with a Wizard draped all over him.

McRae had to be helped off the court early in the second quarter after turning his left ankle. He did not return with what the Wizards said was a sprained ankle.

The game marked the halfway point of the Raptors' season.

This season's record is more than decent considering the injuries the team has had to deal with. No one would have predicted that Davis would be the only Raptor to appear in every game this season.

"It hasn't been easy but there has been some positives," Toronto coach Nick Nurse said prior to the game. "We've seen lots of minutes by lots of guys. Different ways. We've been forced into a lot of different defences and lineups and all kinds of things."

Guard Fred VanVleet, the last missing piece in Toronto's injury puzzle, sat out his fifth game in a row with a hamstring issue. But Nurse said VanVleet was expected to return Saturday in Minnesota "if everything goes to plan."

As he did midweek in Oklahoma City, Nurse opted for size with starts for Gasol, Ibaka, Siakam and Anunoby alongside Lowry.

The first quarter was noteworthy for a jump ball matchup between the six-foot-10 Ibaka and five-foot-nine Isaiah Thomas. Not surprisingly the big man won but the ball went to a Wizard.

Toronto shot 68.2 per cent and led by as many as 15 in the first quarter, with 12 of those points coming off eight Washington turnovers. Anunoby had 11 points in the quarter.

A 13-0 Raptors run extended the lead to 24 in the second quarter before Washington cut the margin to 65-51 at the half. Powell and Anunoby, who made seven-of-eight shots, each had 16 points in the half as Toronto moved the ball nicely.

The Wizards chipped away at the deficit in the third quarter, cutting it to nine at 77-68. But an 8-0 Toronto run restored order.

Washington, which had the injury bug worse than Toronto, arrived on the back of losses to Chicago and Utah.

This report by The Canadian Press was first published Jan. 17, 2020.