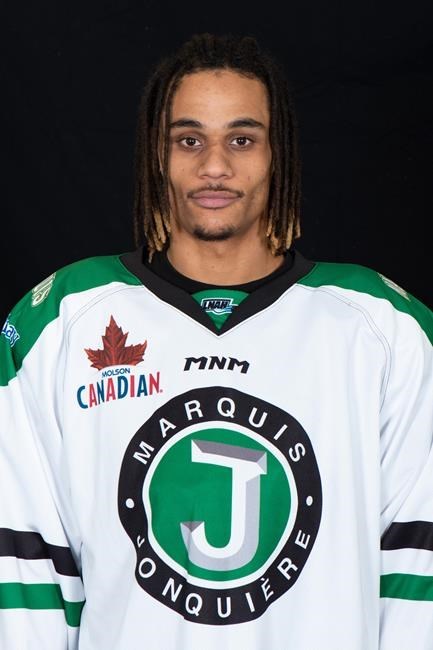 MONTREAL — The commissioner of a Quebec-based semi-professional hockey league has apologized after a player for the Jonquiere Marquis and family members in attendance were subjected to racist taunts from the stands in St-Jerome Saturday night.

Jonathan-Ismael Diaby, a third-round draft choice for the NHL's Nashville Predators in 2013 who is black, left the Ligue nord-americaine de hockey game during the second period as a result of the verbal abuse.

"I want to apologize to Jonathan Diaby and his family," league commissioner Jean-Francois Laplante said in a video posted to Facebook after the incident. "Racist, sexist, homophobic comments are completely unacceptable and cannot be tolerated, whether it's in everyday life or in our arenas."

He said that the spectators who hurled abuse at Diaby and his family represent "a tiny part" of the league's fan base but he nonetheless appealed for good behaviour as the playoffs approach. "Cheer on your teams in a civilized way and always show respect," Laplante said. "Intolerance of differences is based on ignorance, and to combat it, it must be denounced and spoken about."

He ended the video by declaring, "Je suis Diaby" — I am Diaby.

Video of the game on the league's web site shows a fan harassing Diaby, 24, as he entered the penalty box. The fan can be seen making racist gestures and pointing to an image on his cell phone, which Diaby has said was a baboon. A few minutes later, an altercation broke out in the stands where Diaby's friends and family were seated.

Diaby has said they were also subjected to racist taunts from fans of the home-team Petroliers du Nord, whose St-Jerome base is about 45 kilometres north of Montreal. His father was told to go back to where he came from, Diaby said. When he learned what was going on, the six foot five inch, 218-pound defenceman decided not to return to the ice.

"My family was not safe. That's when I decided to leave," Diaby told Radio-Canada. "The security guards did not do much." He said that instead of kicking out the troublemakers, security asked his family to move to a different section. The fan who confronted Diaby at the penalty box was simply told to take his seat.

Georges Laraque, a former NHL player who experienced racism during his playing career, said he cannot believe the situation was allowed to degenerate to the point where even Diaby's family was targeted.

"There is still a long way to go in society to achieve equality," said Laraque, who played junior hockey in Quebec and finished his NHL career with the Montreal Canadiens. "In the arenas, hockey is considered to be a white sport, and racism in hockey is too easy. I was a victim of it throughout my career in minor hockey."

The six-team Ligue nord-americaine de hockey long had a reputation for goon hockey, which it has recently worked to clean up. Laraque said it now needs to address behaviour in the stands.

He said league commissioner Laplante should institute rules making teams responsible for the behaviour of their fans. "The game should have been stopped until these people were kicked out," Laraque said of the racist fans. "They didn't do that."

Petroliers du Nord management declined comment on the incident but said "the necessary measures will be taken" to ensure such behaviour is not repeated.

Francis Desrosiers, the captain of the Petroliers du Nord, was one of a number of players denouncing racism in a video produced by the league Sunday. Incidents like those in St-Jerome Saturday "have no place in the big family of hockey," he said. "Please, continue to cheer us on, but with respect."  Alexandre Quesnel, captain of Diaby's Jonquiere team, said racism cannot be tolerated "whether it's in the stands or on the ice."

Attendance at Saturday's game in St-Jerome's Riviere-du-Nord regional arena was listed at 1,264.

"Why didn't anyone do anything to stop the 30 people who polluted the atmosphere?" Laraque asked.