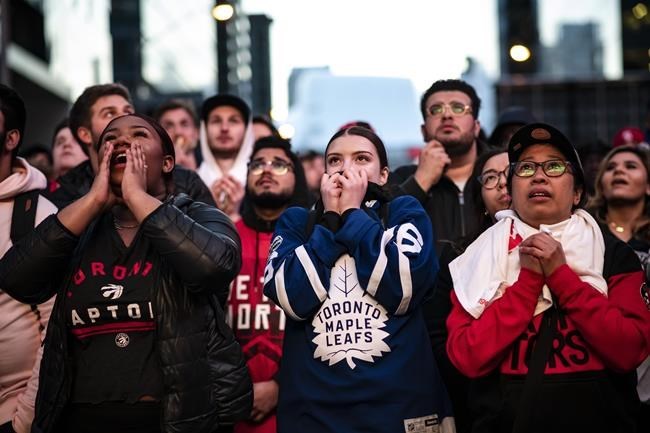 TORONTO — Raptors fever has unquestionably seized Toronto as the team makes an unprecedented bid for the NBA championship.

As became evident with the hordes of revellers that spilled onto downtown streets following Saturday's thrilling Game 6 win over the Milwaukee Bucks in the NBA's Eastern Conference final, the prospect of a Canadian team winning a very American trophy is a potent rallying cry.

It's hooked casual sports fans, ensnared pop culture junkies and most notably, enticed diehard Leafs fans to put aside their blue-and-whites to cheer for Canada's sole NBA team as they face the Golden State Warriors in the Finals.

But Toronto has always been a hockey town, and even this remarkable Raptors run likely won't change that, say some observers including bar manager Adam Zizzo.

"We noticed a lot of our regular Leafs fans definitely hop onto the Raptors bandwagon after the Leafs get knocked out every year," chuckles Zizzo, manager at the Hurricanes Roadhouse Restaurant, located just west of the Annex neighbourhood, a student enclave.

"I think it's just having someone to root for, you know. We don't get too many chances to go deep into the playoffs with any of our teams very often so when one of them makes it, I think everyone kind of gets the team spirit."

The Leafs, of course, haven't made the Stanley Cup final since 1967 and the Blue Jays' most recent World Series appearance was in 1993.

Not surprisingly, business has been great over the past week, he adds, with basketball fans proving as ardent as Maple Leafs devotees: "Raptors fans turn out in droves. We're at capacity an hour before the game starts, every game."

Soaring ticket prices on the secondary market suggest the Raptors are not just the hottest ticket in Toronto, but in the entire league.

"Is Toronto a basketball town? The answer is yes — based on pricing, it's actually the most basketball town that we've seen in 10 years," says Jesse Lawrence of the New York-based ticket search engine and aggregator TicketIQ.

"It's the most in-demand Finals game that we've ever tracked and that's ahead of every Warriors game, which is saying a lot. That's San Francisco — the concentration of global wealth — and the Raptors tickets are almost 50 per cent more. It's crazy."

As of Monday afternoon, tickets for Game 1 at Scotiabank Arena started at US$816 — roughly three times the cost of face value for 300-level tickets. Lawrence says the average has been just shy of US$5,000 — higher than any other final TicketIQ has tracked since it launched in 2011. He says the next highest price was for the Warriors back in 2016 when they faced the Cleveland Cavaliers.

This time around, Warriors finals ticket prices at Oracle Arena started at US$650 and averaged US$2,828, which is the highest for any Warriors final.

Whether the Raptors would command such highs if the Leafs were also chasing a Stanley Cup is another matter, Lawrence allows, musing on the possibility the hockey team would cannibalize basketball sales.

"Leafs playoffs tickets are always the most expensive playoff tickets, any year they're in."

The cheapest Leafs tickets during the first-round bid against the Boston Bruins this year ran about US$200 on TicketIQ — twice those for the Raptors-Orlando Magic matchup during the first round of the NBA playoffs.

Tickets appeared to be more affordable over at reseller StubHub, where 2,639 tickets were available, starting as low as US$688.50 for Game 1. StubHub's general manager Paul Nowosad describes the Raptors final as a "bucket list-type event" since this will be the first time the NBA Finals have been held outside of the United States.

"You kind of went from Toronto being a somewhat fake contender — because they would advance in the playoffs until they met LeBron (James) every year in a relatively weak Eastern Conference — to now being a very legitimate contender," Weber says from Chicago.

"They added a superstar in Kawhi Leonard, and they have the celebrity backing that is unmatched in basketball (in Drake), and maybe in sports. They're getting as much attention as any United States team right now."

But that only goes so far in Canada, he adds.

"Will it ever overtake hockey in Canada? Or in Toronto? That seems like kind of a stretch."

Zizzo notes that back in 2017 when the Raptors and Leafs were both in their respective playoff runs, the Leafs' older franchise drew attention away from both the Raptors and the Toronto Blue Jays.

"Leafs fans tend to be a little bit older, which tends to correlate with some more disposable income, so they can come out more consistently," he says, admitting that a new generation of Raptors-first fans could change that going forward.

"I'm 30 and I grew up watching every Leafs game with my dad and I think now you've got the generation that's grown up watching Raptors games."