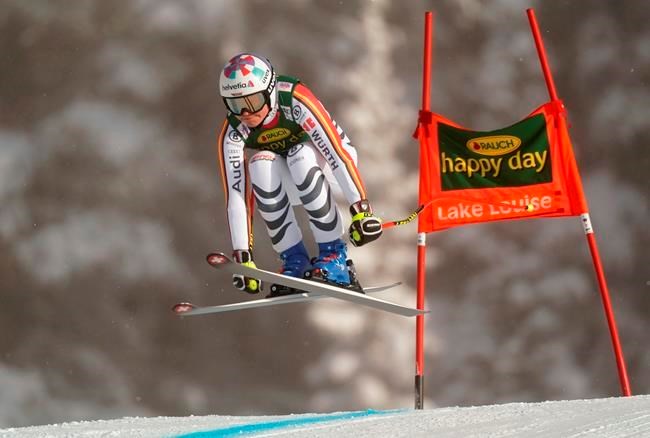 The German skied the cleanest lines on a course set that confounded several of her competitors. Nine of 44 starters did not finish.

Rebensburg's time of one minute 20 seconds was .35 quicker than runner-up Nicol Delago of Italy, and .42 faster than Switzerland's Corinne Suter in third.

Rebensburg won Olympic gold in giant slalom at the 2010 Olympic Games in Vancouver and Whistler, B.C., and is a three-time World Cup champ in the discipline.

"I think for sure my GS skills, or technical skills, they were helping me," she said Sunday.

The 30-year-old Bavarian was second in a downhill in Lake Louise in 2017 and third in super-G last year.

"I was always waiting for the win here in Lake Louise," Rebensburg said.

"The super-G here looks tougher than it is, so I tried to push as hard as I can from top to bottom. Obviously it was working out pretty well."

Super-G, or super giant slalom, is shorter than downhill with more gates for skiers to navigate.

The women don't get the benefit of training runs as they do in downhill to learn the course. They're limited to an hour's pre-race inspection of a super-G course.

The women pushed out of the start hut Sunday under sunny skies and a temperature of minus-16, but some sections of the course were shadowed by trees.

Marie-Michele Gagnon of Lac-Etchemin, Que., was the top Canadian in 19th.

"I have a little fire right now," Gagnon said. "I just messed up that one gate. I guess it got a lot of girls today unfortunately.

"That's why super-G is so cool because you can nail it like Viktoria Rebensburg today. She is crushing the field because she had a good run and didn't make a mistake there."

The Italian fell on her knees in the finish corral upon realizing she'd earned her second career podium and first in super-G.

"I'm so happy because I expect a lot in downhill and in super-G not so much," said Delago after a tearful hug with sister and teammate Nadia.

Suter was second behind Ledecka in Friday's downhill.

"I think I was a bit more relaxed because I'd had second place so I could lose nothing," Suter said. "Today, all or nothing."

The top 30 women Sunday split a prize purse of 120,000 Swiss francs (C$160,000) and collected World Cup points which contribute to their world ranking.

A top-30 start bib is considered an advantage over the rest of the field because it means racing on a smoother, more pristine track.

"I feel I belong more to the speed side now," Gagnon said. "Last year, it was kind of like 'what am I doing? I'm a slalom skier. I should have stuck there.'

"I look around at these superstars all around me and I'm like 'OK, I belong here' which is cool."

The women head to St. Moritz, Switzerland, to race super-G on Saturday and slaloms on Sunday.