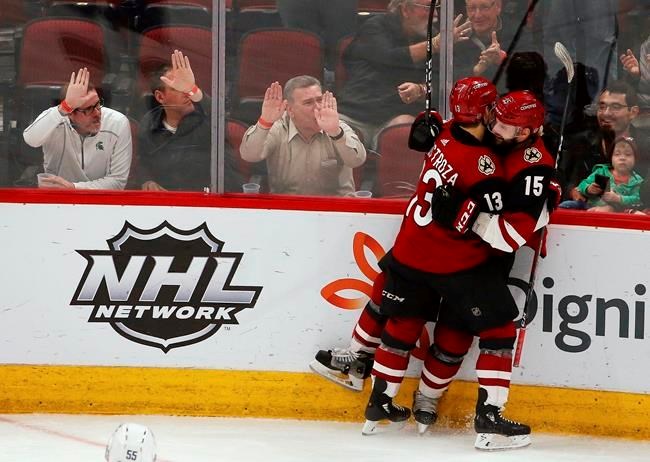 Richardson scored four goals to lead Arizona to a 5-2 victory over the Vancouver, when the Coyotes won their fifth straight while completing a four-game season sweep of the Canucks, further tightening the Western Conference playoff race.

"I was (angry) when I got here because I hadn't napped, but maybe I'll keep that trend going," Richardson said. "I got punched in the face the last game and I can't breathe out of my nose, so I think it was something with that."

Richardson scored twice in the first period, recorded his hat trick in the second period and finished the scoring late in the third after the Canucks closed to 4-2.

Vinnie Hinostroza and Richard Panik had three assists apiece — all on goals by Richardson — and Oliver Ekman-Larsson had two assists.

Richardson has a single-season career-high 16 goals.

"He had a great game," Arizona coach Rick Tocchet said. "Since I took the job here, he's been probably the guy I can rely on, on and off the ice. So glad we signed him. These are the type of games . it seemed like got sloppy, he would go out there and kind of settle our team down."

Richardson had the Coyotes' first four-goal game since Keith Tkachuk did it on March 20, 1997.

Richardson's only other game with at least three goals came on Oct. 23, 2010, while with the Los Angeles Kings. He had 14 goals with Colorado in 2006-07, his first full season and had 12 goals in 47 games with the Coyotes last season.

"It's a long time coming in between," Richardson said. "You want to score. It was just one of those nights where I felt we had the puck all the time and our line was kind of clicking and we were in the right spot at the right time.

"They made some great plays for me."

Tanner Pearson and Antoine Roussel scored for the Canucks, who have lost five of six.

Pearson's goal was 10th this season, and his first for the Canucks since being acquired in from Los Angeles on Feb. 14.

Arizona's Darcy Kuemper made 37 saves while starting for the 10th time in the last 11 games. He is 7-1 in his last eight

Thatcher Demko made 19 saves in his second start of the season for Vancouver, his first appearance since a 4-3 home victory over Buffalo on Jan. 18. No. 1 goaltender Jacob Markstrom had played the previous seven.

Richardson scored twice in the first period around a breakaway goal by Pearson to give the Coyotes a 2-1 lead.

Richardson scored 11 seconds after exiting the penalty box following a two-minute minor, skating in alone on the left side and beat Demko high on the stick side at 11:58 of the first period.

He also scored on a scramble in front of the net in the first period and after a deft drop pass from Panik in the second. He tipped in a pass from Hinostroza for his final goal at 8:03 of the third period.

"I thought we showed a little immaturity in our game tonight," Vancouver coach Travis Green said. "We weren't smart enough with our effort and gave them a couple of goals that you can't give up at this time of the year."

Coyotes forward Derek Stepan was helped off the ice with an apparent left leg injury at 17:29 of the third period after colliding with a Vancouver player. He will be re-evaluated Friday, Tocchet said.

Stepan is third on the team with 13 goals and also is considered one of the team leaders.

NOTES: Forward Conor Garland played his first game since signing a two-year, $1.55 million contract extension Wednesday that will keep him with the Coyotes through the 2020-21 season. Garland has 12 goals and three assists in 37 games. ... The Canucks completed the eighth of their 11 back-to-back sets this season. They are 7-8-1, 3-5-0 in the second game. ... Vancouver was 0 for 3 on the power play and has converted only one of its last 21 and two of its last 35 attempts.

Canucks: Finish a three-game road trip in Las Vegas, which has three points in the first two games between the two this season.

Coyotes: Play host to Detroit in the fourth game of a seven-game homestand Saturday. Red Wings Mike Green had a goal and two assists in the first of two meetings this season, a 6-1 victory Nov. 13.