Scheifele gets go-ahead goal to lift Jets over Panthers 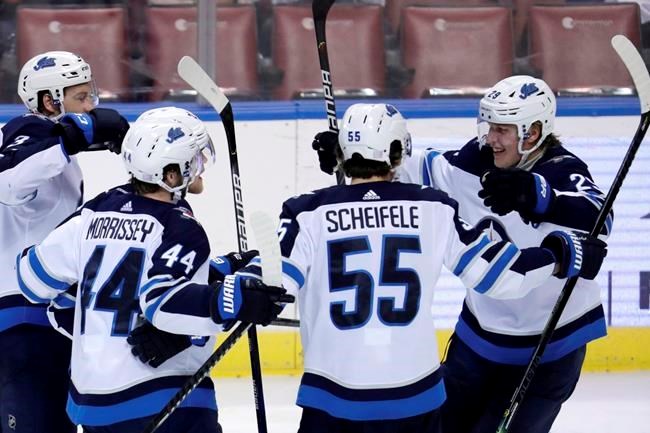 SUNRISE, Fla. — Patrik Laine showed he can be an offensive force even when he doesn’t score.

Laine had three assists and his 200th career point, Mark Scheifele scored late in the third period and the Winnipeg Jets beat the Florida Panthers 4-3 on Thursday night.

Scheifele made it 3-2 with his goal when he took a pass from Laine and fired it from the left side of the crease with 5:08 left.

Laine could have taken a shot, but he passed across the front of the crease to Scheifele.

“It’s still one goal for the team. It doesn’t matter if I score or somebody else scores,” Laine said. “Tonight, I was kind of a playmaker and had some good plays with my linemates and we had three big goals for the team. So, got to be satisfied.”

“Everyone’s used to Pat shooting all these pucks, but it was the right play,” coach Paul Maurice said.

"We weren't sharp (tonight). I didn't think we had the jump or the possession time that we should have had,” Panthers coach Joel Quenneville said.

"I don't really care if I score as long as we win,” Trocheck said. “I like how we were resilient there in the third and didn't let up."

Winnipeg took a 2-1 lead when Ehlers’ one-timer from the left circle went between Bobrovsky’s pads at 4:28 of the third. Trocheck tied it when he backhanded in a rebound from the left side of the crease at 7:13 of the second.

The Jets led 1-0 after Morrissey’s wrist shot from the slot with 16:15 left in the second.

Barkov tied it at 1 on his power-play goal with 4:52 left in the second. Mike Hoffman’s shot from above the right circle was blocked by Brossoit, but Barkov was able to backhand in the rebound. Barkov has a seven-game points streak.

The Panthers have scored at least one power-play goal in their past eight games.