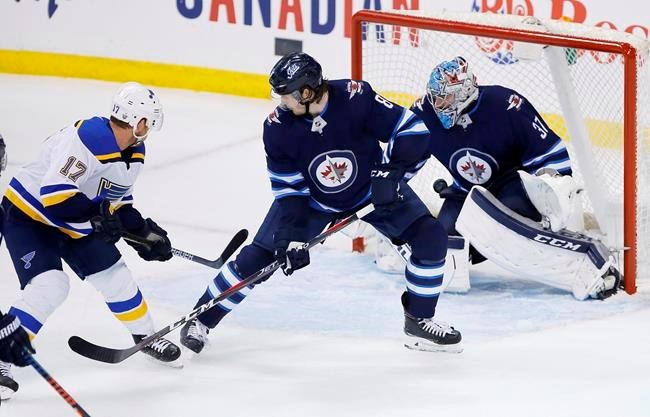 WINNIPEG — Jaden Schwartz called it a lucky goal, but it was a dagger to the Winnipeg Jets.

The St. Louis forward scored with 15 seconds remaining in the third period, lifting the Blues to a 3-2 victory over Winnipeg on Thursday and handing St. Louis a 3-2 series lead in their Western Conference quarterfinal.

Tyler Bozak sent a pass over to Schwartz, who batted the puck in the air and sent it past Jets goalie Connor Hellebuyck for the winner.

"(Bozak) came on, he was fresh, and probably knew there wasn't much time left so he just threw (the puck) on net and I kind of got lucky, it just hit my stick," Schwartz said of his first goal in the playoffs.

Ryan O'Reilly and Brayden Schenn also scored for the Blues in the third period. St. Louis hosts Game 6 of the best-of-seven series on Saturday. Jordan Binnington stopped 29 shots for the visitors.

Winnipeg was up 2-0 after first-period goals by Adam Lowry and Kevin Hayes.

"If we lose, we're done," Hayes said. "That's enough motivation. Game 6 will be our best game."

All the games in the series have been won by the visiting team.

Hellebuyck made 26 saves for Winnipeg, which extended its home losing streak to six games, including the regular season.

"Lucky pinballs," Hellebuyck said of Schwartz's goal. "The puck just bounced and ended up right on their tape. Tough to eat that one, but I thought we were the better team. If we keep fighting here, it's not over."

Schenn tied the game 2-2 with 6:08 remaining in the third period following a review. Oskar Sundqvist passed the puck over to Schenn and then slid into the net and knocked it off, but it was ruled Schenn had shot the puck into the net before a defensive player caused it to come off.

Winnipeg mounted a 2-0 lead after the first period, even though the Blues had the 15-12 advantage for shots on goal.

Lowry got the crowd fired up 12 seconds into the game when he used Brandon Tanev's rebound to notch his first goal in the series. It set a franchise record for fastest goal in the playoffs. Jacob Trouba had the previous mark of 31 seconds, scored in Game 5 against Minnesota last season.

After fans stopped cheering, some on the rink side of St. Louis's net started chanting "You look nervous" to Binnington. Before Game 1, a video clip of the rookie saying, "Do I look nervous?" to reporters made the rounds on social media.

"Yeah, that's incredible," Binnington said of hearing the chants. "You get what you ask for because when I was younger, I really enjoyed that stuff and always wanted it, and now it's here. It doesn't feel as good as I thought, but it's cool, it's really cool."

Hayes cut to the front of the net at 13:35 and sent the puck under Binnington's pad to make it 2-0 with his second goal of the playoffs.

He took away his own goal when his close shot slid under Binnington and started going toward the goal line. He tried to swipe it across, but his stick pulled the puck out instead.

Hayes also had a breakaway late in the period, but Binnington sprawled on the ice and the shot from the side went into his pads.

Winnipeg got a four-minute power play when Robert Thomas was dinged for high sticking Mark Scheifele in the face shield, but the Jets only had one shot on goal after a number of misses and blocked attempts.

Notes… St. Louis was missing injured third-pairing defenceman Robert Bortuzzo, who was replaced by Carl Gunnarsson ... It was the fourth time in NHL history, and first time since 2004, that the home team has lost all five games to start a series.