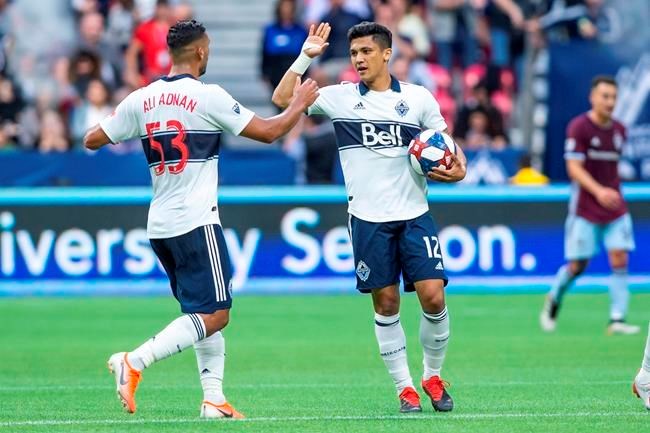 VANCOUVER — The Vancouver Whitecaps know there's work to be done as they head out on another tough road swing.

Half-way through the season, the 'Caps (4-6-7) currently sit a single point out of playoff position and need some road wins to muscle their way into the post-season.

The next opportunity will come against F.C. Dallas (7-6-4) on Wednesday.

"They're a playoff team at the moment so we want to get points from them because at the end of the day we are rivals," he said Monday. "We want to get the spot that they have right now."

The game in Dallas will be the first of four road contests in a row for the Whitecaps and coach Marc Dos Santos wants his team to handle the trip the same way they dealt with a swing to New York and Kansas City in May. The 'Caps battled to ties in both games on that trip.

The distance will be different this time around, Dos Santos said, but the quality of opponents will be comparable.

"The mentality and the type of approach tactically we had we have to do a very similar — if not better —job," he said.

The Whitecaps will be without some key pieces for this trip, however.

Goalie Maxime Crepeau, midfielder Russell Teibert and centre backs Doneil Henry and Derek Corneilus are all off playing for Canada in the Concacaf Gold Cup, and winger Lass Bangoura has been called up to the Guinean national team.

The absences have forced Dos Santos to make some lineup changes, including moving midfielder Andy Rose to the centre back position.

While the change has come with a learning curve, Rose said he's enjoyed getting to know another position.

"I'm the sort of player that just wants to be on the pitch and help the team in anyway possible," he said.

The Whitecaps have already faced off against the Torros once this season, taking a tight 2-1 victory over F.C. Dallas at B.C. Place on May 25.

"That was a really good win, a hard-fought win," Rose said. "We had to be patient, we defended deep at times. It was a great step for us in the right direction. So we want to continue that."

The win kicked off a strong run of form for the 'Caps, who have gone undefeated in their last five matchups.

Four of those games have ended in draws, including Saturday's 2-2 result against the Colorado Rapids in Vancouver.

The Rapids got off to an early 2-0 lead, but the Whitecaps battled back, dominating 69.4 per cent of the game's possession, putting nine shots on target and breaking a club record for touches with 915.

Dos Santos was pleased with the squad's resiliency.

"Our reaction during those (last) 70 minutes was not only good but was phenomenal. The possession, the goal scoring chances, almost turning the game around for 3-2," he said. "So that's positive."

The draw was the team's seventh of the season, tying the Whitecaps with Sporting Kansas City for the most in the Western Conference.

"That means that if we don't win, we don't lose. We're very competitive in every game," Dos Santos said.

"Now, we need to get to the other side. It's all good to say in the last 12 games we only lost two, but we feel that we're so close to winning more."

F.C. Dallas has also been on a roll lately, taking seven points from their last three MLS outings. They beat Toronto FC 3-0 on Saturday.

The Whitecaps know what they're up against heading into Texas, Rose said.

"Certainly in transition they're a good team," he said. "They've got a lot of youth, a lot of energy. And we need to find ways to match that."

Teams like Dallas are always tough to play, especially when they're on their home turf, Montero said.

"We know it's going to be hard (on Wednesday) but at the end of the day, we're ready for that," he said. "We're focused on getting the result."

CALL UPS: F.C. Dallas is also missing a few bodies due to the Gold Cup. Midfielder Bryan Acosta has suited up for Honduras, Carlos Gruezo is playing midfield for Ecaudor and defender Reggie Cannon is with Team USA.

BATTLING THE ELEMENTS: The weather may present an extra challenge for the Whitecaps on Wednesday. The temperature in Dallas is forecast to reach 33 Celsius and will likely feel even warmer due to the humidity. Back in Vancouver, the mercury hit a high of 19 Celsius on Monday.