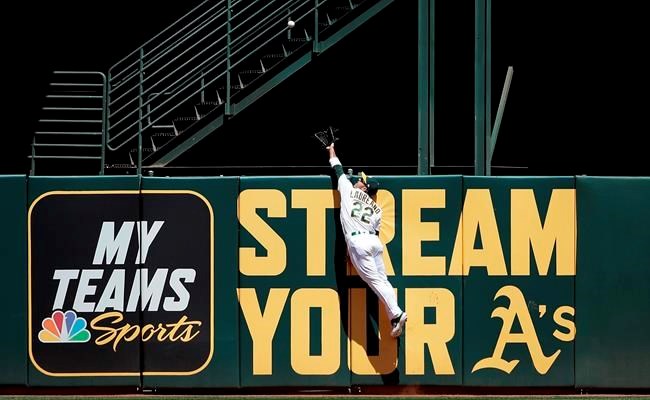 But the A's couldn't totally stop Smoak and the Toronto Blue Jays, who finished off a three-game sweep with a 5-4 victory Sunday.

"Over this road trip we finally started swinging the bats," Smoak said after getting four hits, including a home run. "Hopefully we can continue to do that. If we do we'll be in a better position to win some ballgames."

On a day when both starting pitchers needed to leave early with ailments, Laureano showed off the most impressive toss.

Smoak led off the second inning with a single and Teoscar Hernandez followed with a long drive to . Laureano made his way back to the wall and reached high to make the catch.

The strong-armed Laureano, who has already nailed several runners this season, quickly recovered and aimed to get the retreating Smoak, unleashing a throw from the edge of the warning track.

The peg sailed far over the head of first baseman Kendrys Morales and carried into the expansive foul territory at the Coliseum, one-hopping to near the dugout.

Smoak tried to advance on the overthrow and was caught at second base by catcher Nick Hundley, who backed up the play.

"I was really pumped up when I made that throw," Laureano said. "I threw without thinking. That happens sometimes."

Blue Jays starter Aaron Sanchez was pulled after four innings because of a broken fingernail, a problem that has plagued him in the past.

Oakland was swept at home by Toronto for the first time since 1993 after winning all seven games against the Blue Jays last season.

Toronto posted its first road sweep of at least three games since 2015 and capped a 6-1 trip. The Blue Jays went 1-5 on their first road trip earlier this season.

"It's great how we're playing the game," manager Charlie Montoyo said. "Our pitching's been there the whole time but now that we're swinging the bats we're a lot better club. We're playing great baseball."

The A's scored three runs in the eighth and had two on with one out in the ninth before Giles struck out Josh Phegley and got Robbie Grossman to pop out.

"We aren't swinging at our best and they pitched pretty well on top of that," Oakland manager Bob Melvin said.

Freddy Galvis added two hits and Alen Hanson singled, scored and had an RBI in his first game in the leadoff spot for Toronto.

If Anderson has to pitch against Toronto again, he might want to call in sick. His ankle injury came less than a year after he sprained his shoulder the previous time he faced the Blue Jays on May 18, 2018.

"I'll be fine," Anderson said. "I'll come in tomorrow and see how it feels."

Sanchez said he doesn't expect to miss his next start.

"We have to see how it is in the next few days," he said. "The good thing is we have a couple off days this week to give me some extra time to heal up."

Blue Jays: Galvis left in the ninth inning three batters after making a sliding stop on Stephen Piscotty's infield single. Richard Urena, who was called up from Triple-A Buffalo earlier in the day, replaced Galvis and made the catch for the final out.