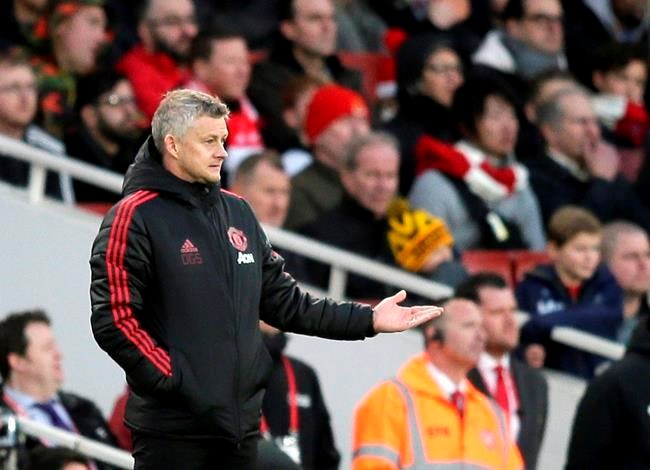 LONDON — Soaked by the rain swirling around Arsenal's stadium, Ole Gunnar Solskjaer watched helplessly as his dream Premier League start as Manchester United manager was brought to a halt on Sunday.

After 12 unbeaten matches across three months since Jose Mourinho's firing, United finally lost in the league under the interim manager.

Granit Xhaka's swerving — potentially wind-assisted — strike flew past goalkeeper David De Gea in the first half. Pierre-Emerick Aubameyang netted a second-half penalty to give Arsenal a 2-0 victory after Alexandre Lacazette was bundled over in the penalty area by Fred.

"You have to be disappointed with the result," said Solskjaer, who had 10 wins and two draws in the league. "But the performance, as you say, was a good one."

Arsenal and United were once slugging it out for the title in the era of Alex Ferguson and Arsene Wenger. Now they are in a chase for fourth place. Arsenal displaced United in the final Champions League qualification spot, sitting two points in front.

The title challenge is down to two teams, and Liverpool trimmed Manchester City's lead back to a point after coming from behind to beat Burnley 4-2.

Chelsea, which won the title two years ago, remains down in sixth place after behind held 1-1 by Wolverhampton but is only one point behind United.

"I don't think nerves go into it yet. Spurs lose (at Southampton on Saturday), we lose, Chelsea draw," Solskjaer said. "It is going to be down to the wire. Down to the last few games. Definitely. We've given ourselves a great chance to be in that fight."

United has displayed its perseverance already in the last week, scoring a stoppage-time goal at Paris Saint-Germain to advance to the Champions League quarterfinals.

"It was maybe backlash from Wednesday night," Solskjaer said of the loss at Arsenal.

It was a day of flashpoints of fan unruliness in English soccer with two fans arrested in high-profile incidents.

In the second-tier League Championship, Aston Villa captain Jack Grealish was punched by a fan who ran onto the field at Birmingham City. Grealish went on to score in the 1-0 derby win for Villa.

A supporter also managed to invade the Emirates Stadium pitch after Aubameyang scored, pushing United defender Chris Smalling in an attempt to join the celebrations before being stopped by stadium security.

In high winds and occasional driving rain, Liverpool fought back against Burnley, which took an early lead at Anfield in the sixth minute when Ashley Westwood's corner curled straight into the far top corner of the net.

On his fifth start of the season, Adam Lallana inspired the comeback with a part in Liverpool's first two goals for Roberto Firmino and Sadio Mane.

Firmino and Mane also scored in the second half, with Mane's goal the last kick of the game seconds after substitute Johann Berg Gudmundsson had scored a stoppage-time goal for Burnley.

"The message from today is that nobody gets rid of us, if we play as we played today," Liverpool manager Juergen Klopp said. "We had the perfect mixture of fighting the opponent, fighting the circumstances and playing football. That was really good and I liked it."

At Stamford Bridge, Chelsea winger Eden Hazard exploited a Wolves defensive lapse to strike his 13th league goal of the season in the second minute of stoppage time to cancel out Raul Jimenez's opener.

"When you have to play only 10 matches, every match you're not able to win is a missed opportunity," Chelsea manager Maurizio Sarri said. "In the last six matches, we won four matches and drew the other two. So there is a little consistency in this moment. We have one match in hand, so we have to be confident."

Wolves are seventh in the standings but 13 points behind Chelsea.

Raptors will face Houston, Portland and Phoenix in three scrimmages
Jul 4, 2020 10:14 AM

Whitecaps' match against FC Dallas at MLS is Back Tournament pushed back
Jul 4, 2020 9:32 AM