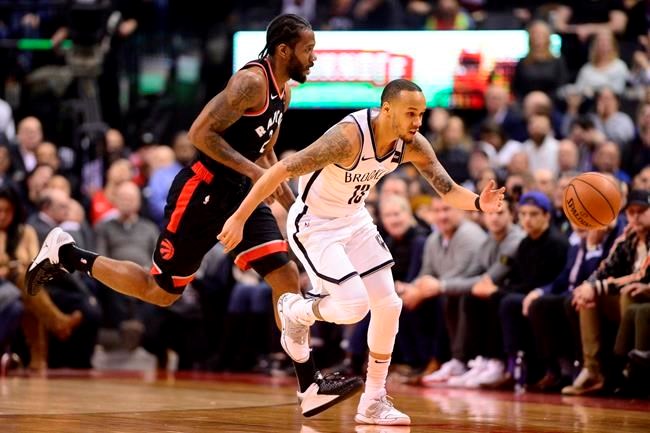 TORONTO — Kawhi Leonard was out and Jeremy Lin in as the Toronto Raptors welcomed the visiting Washington Wizards on Wednesday.

With Fred VanVleet out with a partial ligament injury to his left thumb, Lin immediately moved into the backup point guard spot behind Kyle Lowry.

A sore left knee kept Leonard on the sidelines for the second time in the last four games. The Raptors star has played in 43 of the Raptors 59 games this season — missing 10 for rest/load management reasons, two for a bruised right hip, two for left ankle soreness and two due to the knee.

His next scheduled action is Sunday's all-star game in Charlotte.

Asked if he would rather see Leonard not play Sunday, Nurse replied "Not at all, man."

"It's a heck of a showcase for a guy," he continued. "I think that's a great honour. ... That's as good as it gets looking back over your career and saying you played in that many (all-star) games."

Lin's move to Toronto had been widely reported but was not announced officially until two hours before Wednesday's game.

"Let's see what he looks like in a Raptors jersey," said Nurse.

Lin, 30, arrived just hours before tip-off and took part in a Raptors walkthrough.

"Just landed. This Canada weather not playing around," he wrote in a social media posting showing a photo of wintry Toronto.

Toronto came into the game having won five in a row with a record 42 victories before the all-star break.

After Wednesday, the Raptors are off until Feb. 22 when DeMar DeRozan and the San Antonio Spurs come to town.

Leonard, voted an Eastern starter, and Lowry, a reserve pick, are both part of this weekend's all-star festivities in Charlotte. OG Anunoby is slated to play in the Rising Stars game with Danny Green taking part in the three-point shooting contest.