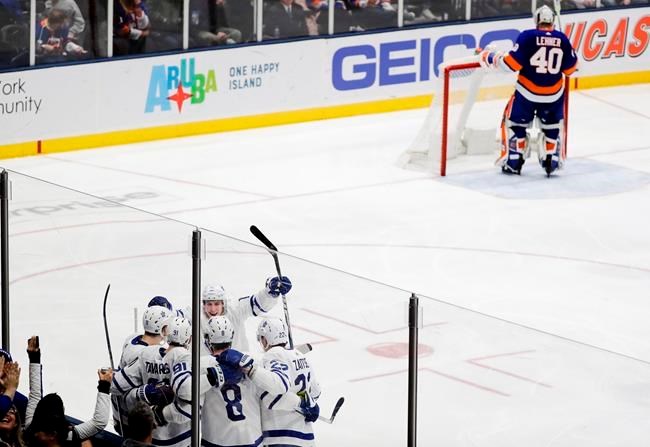 UNIONDALE, N.Y. — John Tavares didn't acknowledge gaining any satisfaction from scoring against his former team. His focus was just on helping the Toronto Maple Leafs get in the playoffs.

Tavares scored in the third period and the Maple Leafs clinched their berth with a 2-1 victory over the New York Islanders on Monday night.

"It's just nice to help contribute to a win that got us officially in the playoffs," Tavares said. "That's what matters most."

Calle Rosen also had a goal for Toronto, which needed one point to secure its third straight spot and won for the fourth time in 11 games (4-5-2). Frederik Andersen stopped 28 shots.

"It's great to punch your ticket," Tavares said. "You work hard all year to give yourself a chance to be a part of it. Every opportunity, you want to take advantage of it. We put a lot of work into it and we've got a lot of work ahead."

Toronto, third in the Atlantic Division, is assured of facing second-place Boston in the first round, and the Maple Leafs still have a slim chance of passing the Bruins for home-ice advantage in the series.

Tavares, held without a point while the Maple Leafs lost by a combined 10-1 margin in his first two games against the Islanders since leaving them last summer to sign with his hometown team, broke through off a pass from Mitch Marner from the inside edge of the left circle to make it 2-0 at 3:50 of the third period. Tavares extended his career best with his 46th goal and set a career high with his 87th point.

Jordan Eberle scored and Robin Lehner finished with 36 saves for the playoff-bound Islanders, who were playing their final regular-season home game.

"Give them a lot of credit, they had a lot of desperation in their game," New York coach Barry Trotz said of the Maple Leafs.

New York squandered a chance to pull within a point of first-place Washington in the Metropolitan Division. Instead, the Islanders remained three points behind the Capitals and two ahead of third-place Pittsburgh. The Capitals, who lost 5-3 at Florida, and the Islanders each have two games remaining — including the season finale at Washington on Saturday night. The Penguins have three games left.

Eberle spoiled Andersen's shutout bid with 5:05 left as he got a pass from Brock Nelson from in front of the goalie and put the puck in from the left side on the power play for his 19th of the season and fourth in the last three games.

The Islanders pulled Lehner with about 1:40 left but couldn't beat Andersen again as the Maple Leafs held on.

"Our group played real hard tonight," Maple Leafs coach Mike Babcock said. "It's nice for John Tavares, for us to come back here tonight and for him to get the game-winner. ... The whole game we were prepared and competed hard right from the get-go."

Tavares was greeted by a chorus of boos when the Maple Leafs took the ice for pregame warmups, when his name was announced for the starting lineups, and when Toronto came out for the start of the game. He was booed nearly every time he stepped on the ice in the first period, and again serenaded with chants of "We Don't Need You" about three minutes into the game.

It was a less hostile reception than the one he received on Feb. 28 in his first game as a visiting player. On that night, fans angry at his departure after he repeatedly said he hoped to stay, mixed in boos and several derisive chants from the start of warmups and throughout the game.

Rosen got the Maple Leafs on the scoreboard, firing a slap shot from the top of the left circle past Lehner 2:17 into the second. The 25-year-old , making his season debut after playing in four games in October 2017, got his first career goal.

Andersen denied attempts by Devon Toews and Adam Pelech 16 seconds apart to keep the Islanders off the scoreboard near the midpoint of the second period.

"He's been our backbone all year," Tavares said of Andersen, who had given up 19 goals while going 2-1-2 in his previous five starts. "Great to see him have that kind of night. (He) looked so poised and calm."

Islanders: At the Florida Panthers on Thursday night before closing the regular season at Washington on Saturday night.

Vin A. Cherwoo, The Associated Press