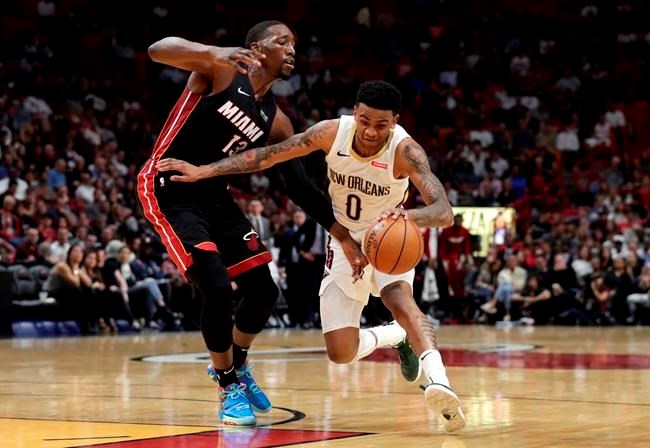 With the New Orleans Pelicans lineup decimated by injuries, Nickeil Alexander-Walker has gone from rookie prospect learning the ropes in the NBA to potent three-point threat off the bench.

The shooting guard from Toronto has made 11 three-pointers over his last two games, including six in a career-high, 27-point effort in a 109-94 loss at Miami on Saturday. He added five threes and 19 points in a 108-100 win over visiting Golden State on Sunday.

The scoring outburst has coincided with a major uptick in playing time as injuries to key players kept piling up.

"You never want guys to go down (to injury)," Alexander-Walker said after Saturday's game. "I pray that all my teammates come back healthy, so that we can try to turn it around.

"But at the same time, when your name is called, you have to step up. I've been learning that’s part of being a pro. When my name was called, I felt like it was needed for me to be aggressive, and that’s what I tried to do."

After a very impressive pre-season, Alexander-Walker received a wake-up call in the Pelicans' season opener in his hometown. He hit his first NBA shot, a three-pointer, against the defending champion Raptors, then missed his next nine.

He showed flashes of the talent that led to the Pelicans taking him 17th overall at this year's draft — 15 points in a loss to the visiting Golden State Warriors in his fourth career game, 13 points in a return match against the Raptors in New Orleans — but was largely an inconsequential piece for the Pelicans until injuries took out many of the team's top rotation players.

"Playing with peace mentally and letting the game come to me," Alexander-Walker said when asked about Saturday's breakout performance. "You know when you get that rookie wall, you start thinking about a lot of different stuff and someone just told me to stay true to self. That’s what I did and God did his work."

Redick, one of the steadiest shooters in the game, said Alexander-Walker is quickly figuring out how to succeed at the NBA level.

"The game's slowing down for Nickeil," said Redick. "Secondly, to see the ball go in the basket is a big thing. It gives you confidence, obviously, and helps with your rhythm."

BRISSETT'S DEBUT — Raptors forward Oshae Brissett made his NBA debut on Monday, and probably got more playing time than he anticipated. With the Raptors comfortably up 120-82 against visiting Charlotte, Brissett was substituted in for Matt Thomas with 5:19 remaining. The native of Mississauga, Ont., who was called up from the G League's Raptors 905 earlier Monday, played the rest of the game as the Raptors cruised to a 132-96 victory. While Brissett didn't score, he had a couple of good looks, including a bank shot late in the game that just missed.

RJ WINS REMATCH — An all-Canadian matchup last week between New York guard RJ Barrett and Cleveland centre Tristan Thompson went to the Cavaliers' veteran. The Knicks rookie, however, got the better of the better of Thompson in the rematch. Barrett, from Mississauga, had 15 points, two steals and two blocks in New York's 123-105 win over Cleveland on Sunday. Thompson, from Brampton, Ont., was held to nine points and five rebounds.

WITHOUT WIGGINS — Andrew Wiggins, who is having an excellent season so far, has missed the Minnesota Timberwolves' last three games — the first two for personal reasons following the death of his grandmother and the third due to an illness. The Timberwolves initially struggled without the native of Vaughan, Ont., losing back-to-back home games to Washington and Houston by a combined 41 points. They rebounded, however, with a 112-102 win at Utah on Monday.

THROWBACK THREADS — The Memphis Grizzlies announced they will turn back the clock Saturday and wear the original turquoise road jerseys from the franchise's days in Vancouver. The Grizzlies posted a picture of star rookie Ja Morant wearing the retro wear on Twitter. The jerseys had a fair number of positive reviews on Twitter, though some basketball fans in British Columbia were less impressed, with one posting "So you're memorializing... stealing our team?" The Grizzlies moved from Vancouver to Memphis in 2001.

CHECKING IN — Miami centre Kelly Olynyk of Kamloops, B.C., had 13 points, including three three-pointers, five rebounds and three steals in the Heat's win over the Pelicans. ... Raptors centre Chris Boucher of Montreal had his first double-double of the season in the win over Charlotte with 11 points and 11 rebounds. ... Denver guard Jamal Murray came back from an uncharacteristically quiet night with 39 points, including seven three pointers, and eight assists in the Nuggets' 131-114 win over Memphis on Sunday. Murray, from Kitchener, Ont., was held to four points in a game against Brooklyn on Thursday ...  New York Knicks prospect Ignas Brazdeikis of Oakville, Ont., currently in the G League, had 36 points, six rebounds and two steals in Westchester's 96-94 loss to Grand Rapids on Monday. ... Indiana shooting guard Naz Mitrou-Long of Mississauga had a career-high 12 points in the Pacers' 115-86 win at Brooklyn on Monday.

KEEP AN EYE ON — Murray will lead the Nuggets, sitting third in the Western Conference entering Tuesday's games, into a big matchup with the Eastern Conference-leading Boston Celtics on Friday night. Murray scored 48 points in a 115-107 win when the Celtics made their lone visit to the Mile High city last year. He also caught the ire of the Celtics by shooting a last-second three-pointer in an effort to hit the 50-point plateau, with guard Kyrie Irving launching the ball into the stands in anger.

CanaDunks, a weekly notebook on Canadians in the NBA, is published every Tuesday

This report by The Canadian Press was first published Nov. 19, 2019.

Note to readers: This is a corrected story. A previous version misspelled Derrick Favors' surname.