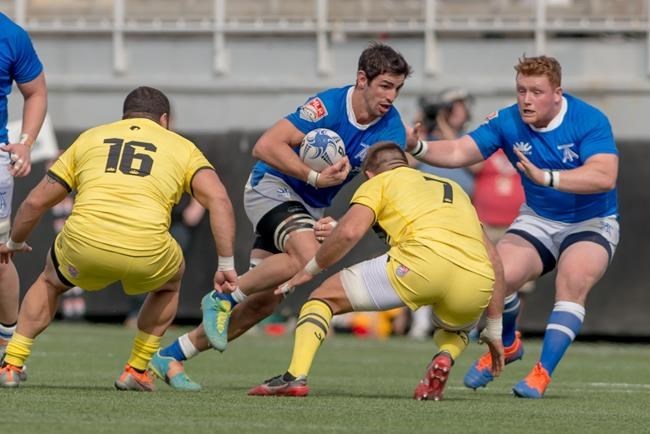 Not many rugby clubs travel with a lawyer but the Toronto Arrows have that covered with Tomas de la Vega.

Now focusing on rugby, the No. 8 is making his mark in his debut season in Major League Rugby. After three games, de la Vega ranks second in the league in tackles (48), is tied for second in lineout takes (20) and stands third in carries (37).

The six-foot-two 235-pounder arrived in Canada with a fine rugby resume.

De la Vega made his senior debut for Argentina against Chile in May 2011 and last played for the Pumas in June 2014 against Scotland. He returned to the national scene in 2017, playing for the second-string Argentina XV in the Americas Rugby Championship.

In February 2018, he captained Argentina XV when it beat Canada 40-15 in Jujuy, Argentina.

After playing club rugby for Club Universitario de Buenos Aires, de la Vegas decided it was time for a change in 2020.

"I already had my law degree four years ago and I was willing to have a new experience in professional rugby," he explained.

It helped that he knew Uruguayans Leandro Leivas and Gaston Mieres, both members of the Arrows.

"They told me it was an excellent experience, (that) rugby was growing a lot here in Canada and the MLR. That's why I came here. I'm really happy with the decision and enjoying it a lot."

The move has been eased by the fact that wife Dolores, who studied economics back home, found a job with Labatt within a week of landing. She had been working with the same company in Buenos Aires and secured a transfer.

"That is really amazing," said de la Vegas. "We both have a job now."

Despite leaving summer in Argentina for winter in Canada, de la Vega and his wife are enjoying Toronto.

"The city is very tidy, lovely," he said. "Plenty of interesting places to visit."

And while it has only been a small sample size, he has been pleasantly surprised by the level of rugby in the MLR.

"Pretty good," he said. "More than I imagined. Not only the games, the teams we're playing against, but also the professional status of the training, the coaches, the facilities. It's really very good."

De la Vega represented Argentina at World Rugby Under-20 Championships in 2009 and 2010 and graduated to the Pumas while continuing his studies.

He eventually stepped away from international rugby, saying the heavy workload was leaving him "a bit stressed."

"I needed that time to be with my family, my friends," he said.

Not all of the Argentina coaches understood his decision.

"It wasn't that I didn't want to play for the Pumas any more, because it was the best thing that happened to me in professional rugby," he said. "But I really needed that time off."

After finishing his law degree in 2016, he returned to the international scene with the Argentina reserve side. De la Vega would like to play for the Pumas again but doesn't think it is likely given the influx of talented younger players now available.

"Now my focus and head is here with the Arrows, trying to enjoy (rugby), to improve my rugby skills," he added. "Time will tell."

De La Vega initially started work in his father's law firm. But three years ago, he partnered with a friend who is a real estate broker and switched to real estate.

This report by The Canadian Press was first published Feb. 28, 2020.