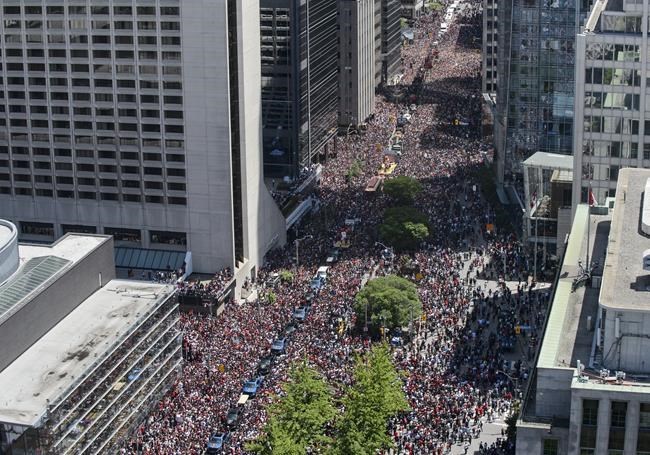 TORONTO — The City of Toronto is defending how police and paramedics dealt with a sick baby in the massive crowd that turned out for the Raptors NBA championship victory parade earlier this month.

In a joint statement, the city and police say the mother called for help at around 1:30 p.m. on June 17 near University Ave. at York St. after noticing her child was unresponsive.

The city says paramedics began helping the baby and a medical distress radio call was made.

The statement says a police SUV arrived and rushed the infant to hospital in six minutes.

The city says initially the baby had no vital signs and then regained them that afternoon, but died on June 19.

"The death of a child is always tragic and the City of Toronto, its agencies and Maple Leaf Sports and Entertainment express their deepest condolences to the baby's parents and family for their loss," reads the statement released Thursday night.

"Reports that neither medics nor police could get to the baby are unfounded," it said."The infant arrived at hospital in 6 minutes from the police arriving at the scene."

On Thursday, Global News reported that Toronto Police Association president Mike McCormack said officers have expressed concern about "poor planning" and a "lack of support" for the parade.

The report also said Mike Merriman, a paramedic and EMS unit chair for CUPE Local 416, confirmed that the paramedics who initially helped the woman were honour guards, which are former paramedics.

The city said there where approximately two million people gathered to see the players and coaches make their way from Exhibition Place to Nathan Phillips Square, with 100,000 people attending the rally on and near the square.

It said in the days that followed staff met to discuss the need for a more proactive celebration plan for future events, including improved public safety measures.

The city said an organizing committee will be struck to plan future celebrations and it will use an experienced security consultant.