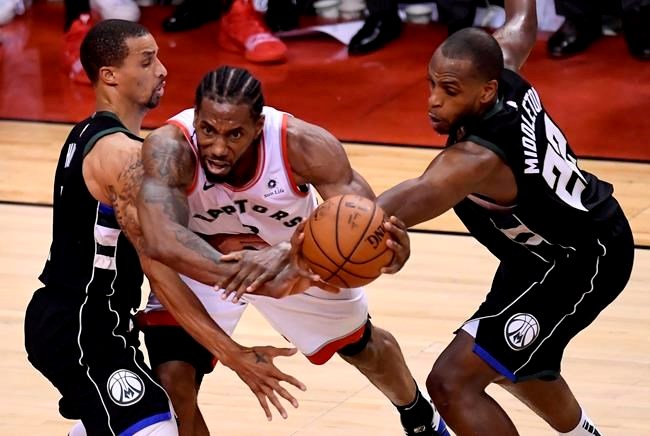 Sportsnet says an average of 3.1 million viewers tuned in for Toronto's win over the visiting Milwaukee Bucks on Saturday night.

That is well above the previous mark, set in Game 7 of the second round against the visiting Philadelphia 76ers when an average of 2.2 million watched Kawhi Leonard hit the winning shot for Toronto at the buzzer.

Audience levels for Game 6 against Milwaukee peaked at 5.3 million at 11:10 p.m. ET, just as Toronto was booking the franchise's first trip to the NBA Finals.

Sportsnet's three games shown during the East final had a series average of 2.1 million viewers, a 77 per-cent increase from the Raptors' other conference final appearance in 2016.

The Raptors' numbers remain behind levels for the Toronto Blue Jays during recent playoff runs.

The Blue Jays had an average audience of 5.12 million for Game 6 of the American League championship in 2015 and 4.02 million for the 2016 wild-card game.

The Raptors and Blue Jays are the lone Canadian teams in their respective leagues.

The Raptors face the Golden State Warriors in the NBA Finals, starting Thursday in Toronto. TSN and Sportsnet split the Raptors' broadcast schedule.