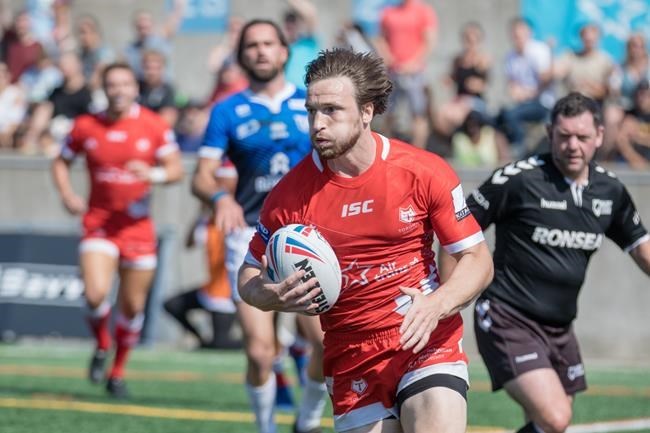 TORONTO — Australian-born Samoan international Ricky Leutele scored three tries to help the Toronto Wolfpack down Toulouse Olympique 40-24 Sunday and move within one win of promotion to the top-tier Super League.

A stiff defence and better-stocked offence carried the day for the transatlantic rugby league team in the playoff semifinal before a season-high crowd of 9,325 at Lamport Stadium. After a cagey opening, Toronto led 26-6 at the half with Leutele carving his way through the Toulouse defence on the left flank.

Extending its win streak to 22 games, Toronto will host the Betfred Championship Grand Final on Oct. 5 with a berth in the Super League on the line.

Toulouse has a second chance and will meet Featherstone Rovers next weekend in the Championship preliminary final to decide who plays Toronto in the Grand Final.

Toulouse got three tries from Mark Kheirallah and one from William Barthau. Kheirallah kicked four conversions.

Mellor, in his 200th career appearance, opened the scoring in the 11th minute capping off a line break by Leutele.

Leutele scored himself in the 16th minute to make it 10-0 before Kheirallah crashed over in the corner to cut the Toronto lead to 10-6. Tries by Leutele in the 29th minute, McCrone in the 31st and Mellor in the 34th kept the scoreboard ticking over as Toronto found holes in the Toulouse defence for a 26-6 lead.

Toulouse missed 21 tackles in the first half, compared to just four for Toronto.

Kay and Barthau swapped tries early in the second half before Stanley went over in the corner — after some nifty handling by Jon Wilkin and others — to increase the lead to 36-12.

Leutele, who won an NRL championship Down Under with the Cronulla Sharks, got his hat trick in style by running through a string of Toulouse tacklers in the 67th minute. Kheirallah added the two late tries for Toulouse.

Toronto also topped the Championship standings last season but fell short at the final promotion hurdle, losing 4-2 to London Broncos in October 2018 under a different playoff format. London went up but its Super League tenure lasted just one season with relegation already confirmed.

And while the Championship Grand Final winner is slated to move into the Super League, Toronto will still have some hoops to jump through apparently. Super League chief executive Robert Elstone has said the top tier needs assurances from Toronto that the transatlantic team can meet minimum standards.

The top five teams in the second-tier Championship advanced to the promotion playoffs. Toronto received a first-round playoff bye by virtue of topping the regular-season standings.

Featherstone, which finished fifth during the regular season, ran in five tries Saturday to beat No. 3 York City Knights 30-4. It had previously dispatched No. 4 Leigh Centurions.

Toulouse (20-7-0 during the regular season) handed Toronto its lone loss of 2019 — a 46-16 road setback on March 9 that saw the French side rally from a 10-point deficit at halftime by reeling off 40 unanswered points.

Toronto (26-1-0) has not lost since, beating Toulouse three times in the process.

Toulouse had won its last eight games and had not lost since July 6, when it was beaten 26-24 by Bradford. The French side thumped York City Knights 44-6 last weekend in the opening round of the playoffs.

Toulouse, like Toronto, is a fully professional full-time side that has made the Super League its goal since leaving French league play.

Toronto raised its all-time record against Toulouse to 6-1-0. Two of the Wolfpack wins were by two points or less.

Toronto winger Matty Russell marked his 150th career appearance. Russell, a 26-year-old Scottish international, came into the game with 27 tries — tied with Kay for the team single-season record. Kay did it in 2017.

This report by The Canadian Press was first published Sept. 22, 2019.