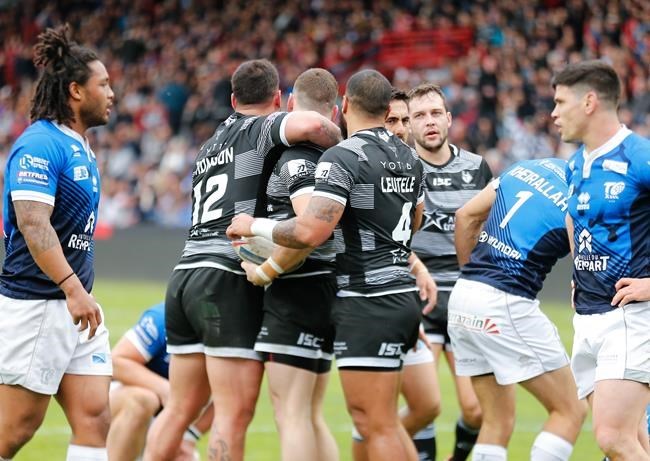 TOULOUSE, France — Trailing by 10 at the break, Toulouse Olympique reeled off 40 unanswered points in the second half Saturday as the Toronto Wolfpack suffered a rare loss in a 46-16 setback in Betfred Championship rugby league play.

It was the first defeat after five wins for new Wolfpack coach Brian McDermott and just the ninth ever in competitive play for the transatlantic team (54-9-2) over its three seasons.

"It hurts," McDermott said of the second-half beatdown. "Our challenge is to react to that and be very good next week. I don't need to make them feel good about themselves right now. If they're hurting right now, that's how they need to be."

Toronto's last loss was the 4-2 defeat Oct. 7 at the hands of the visiting London Broncos in the so-called "Million Pound Game," the promotion showdown that ended the Wolfpack's bid to climb into the Super League.

But the Wolfpack were coming off a spotty performance in a 22-17 win over Dewsbury Rams that needed three late tries.

"I though we were good to start with. But when we hit about 20, 25 minutes, we lacked a bit of energy. I didn't think we finished the half strong," McDermott said.

"We went out there and just lacked a huge amount of energy (in the second half)," he added. I've got to say Toulouse played extremely well, (they) gave us a lesson."

Toronto lost forward Jake Emmitt to a concussion during the game,

"He's not in good shape," said McDermott. "We don't think it's anything other than a concussion but he doesn't look healthy at the moment."

Bodene Thompson and Darcy Lussick were hurting going into the match.

Jack Logan made his debut for Toronto starting at centre. The 23-year-old joined the team earlier in the week on a one-month loan from Hull FC as cover in the backs given injuries to backs Chase Stanley, Gary Wheeler, Liam Kay and Greg Worthington.

Parata put the home side ahead after four minutes but Toronto replied with Wallace and Beswick tries to lead 12-6 after 14 minutes. Leutele increased the lead to 16-6 in the 25th minute with O'Brien's conversion attempt banging off the goalpost.

Robin's converted try cut the Toronto lead to 16-12 in the 45th minute. Four minutes later another Robin try put the home side ahead 18-16 and Toulouse increased its lead to 24-16 through Marguerite in the 56th minute.

Kheirallah added a penalty in the 61st minute to increase the Toulouse lead to 10. Curran's 69th-minute converted try upped the lead to 32-16. Another Kheirallah penalty made it 34-16 in the 72nd minute.

Kheirallah joined the fun with 77th-minute and 79th-minute tries that he converted for the 46-16 win.

The Wolfpack's worst-ever loss was 66-10 at the hands of the Super League's Warrington Wolves in Ladbrokes Challenge Cup play in May 2018.