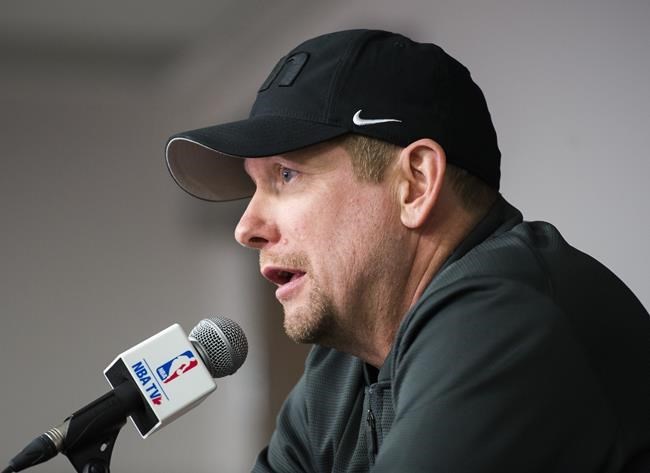 TORONTO — The Toronto Raptors might be one of the most unheralded teams to ever make the NBA Finals.

Several American media outlets dismissed the Raptors' chances in the last two playoff rounds before Toronto came out on top over the Philadelphia 76ers and Milwaukee Bucks.

But being underestetimated is nothing new to the Raptors' players, as no one on the roster was picked higher than 15th in the NBA draft. Since the draft lottery was established in 1985 no team has made the NBA Finals without at least one player who was picked 14th or higher.

"I don't know what it says about the draft," laughed Toronto centre Marc Gasol, drafted 48th overall in 2007. "I was at the back end of the draft, so I was already asleep when they picked me, so I can't really tell you much.

"I think it tells you more about how much of a lottery the draft is and how much more important it is to put the work in every day and continue to improve as a player."

Hard work was a theme among all the Raptors at the OVO Athletic Centre on Monday as they began preparations for Game 1 against the Golden State Warriors on Thursday.

Danny Green, selected 26th overall in 2009, thinks that being underestimated has motivated him and his teammates at different points in their professional lives.

"A lot of guys have come from some good places, some good stories behind it, but they have a chip on their shoulder," said Green. "Guys that have been in the league, or guys that know what it's like to be out of the league or be picked last or to have a point to prove. A lot of character's built on this team coming from many different places."

A compilation video of basketball commentators like Colin Cowherd of Fox Sports and ESPN's Stephen A. Smith burying the Raptors chances against Milwaukee circulated on Sunday, hours after Toronto won its fourth straight game to eliminate the Bucks.

All-star guard Kyle Lowry was quick to dismiss the pundits.

"I don't even know who's picking against us," said Lowry, picked 24th overall in 2006. "It doesn't really matter. Everyone has their own opinion, as always. For us, we've just got to go out there and do our job. Regular season doesn't mean anything."

By contrast, the Warriors are heavily favoured by most commentators and have a nucleus of players who have been highly touted their whole careers. Stephen Curry was a No. 7 pick, Kevin Durant was second overall, and DeMarcus Cousins was fifth.

That pedigree has gotten results, too: Golden State is making its fifth straight NBA Finals appearance, and the Warriors have won three of the past four championships.

Toronto's four-day break was a welcome relief for the Raptors. Lowry has been nursing an injured hand, Kawhi Leonard — the top-drafted Toronto player at No. 15 in 2011 — has played some of the best basketball of his career on a sore knee, and much of the Raptors bench will need the time to improve their shooting.

Pascal Siakam, Gasol and Fred VanVleet have all struggled by moments in the post-season, but Green has laboured the most. Despite starting in all six games of the Eastern Conference final he only made 18.8 per cent of his field goals.

A career 42.4 per cent field-goal shooter, Green has a solution.

Head coach Nick Nurse announced on Monday that sophomore forward OG Anunoby had resumed practice with contact. He's been out since April 12 after having an appendectomy. Nurse predicted that Anunoby will need approximately 10 more days before he's ready to play in a game.