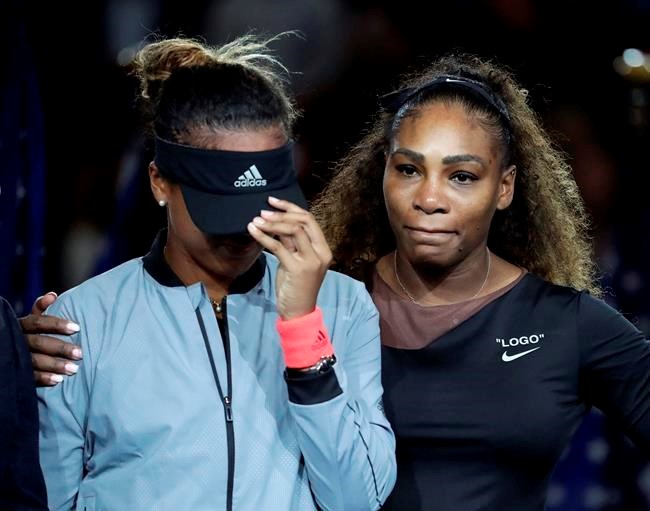 As the start of the 2019 U.S. Open approaches, the indelible image from last year's tournament does not involve a particularly remarkable shot or a champion holding a trophy.

Instead, it is, and likely forever will remain, Serena Williams pointing her index finger at chair umpire Carlos Ramos while insisting that he owed her an apology after they clashed during the women's final.

The tenor of that match between Williams — who then was, and currently is, seeking a 24th Grand Slam singles trophy — and Naomi Osaka — whose terrific performance during a 6-2, 6-4 victory largely was ignored amid the chaos that enveloped Arthur Ashe Stadium that day — shifted after Ramos warned Williams for receiving a coaching signal from the stands and devolved from there. She eventually was docked a point and, later, a game — and afterward was fined $17,000.

Almost a full 12 months later, with first-round play beginning Monday at Flushing Meadows, the ramifications of that 1-hour, 19-minute contest still reverberate, including this: Ramos will not officiate matches involving Serena Williams or her older sister, Venus.

"We've decided that there are over 900 other matches and Carlos, for 2019, will not be in the chair for a Williams sisters match," U.S. Tennis Association executive Stacey Allaster said in a telephone interview. "We want the attention of the competition to be on the athletes."

Among the key story lines that carry over: Serena Williams, also the runner-up at Wimbledon each of the past two years, is trying to equal Margaret Court's mark for most major singles championships. Osaka, who added her second Slam title at the Australian Open in January, returns to New York ranked No. 1 — and dealing with knee discomfort that forced her withdrawal from a tuneup tournament last week.

What's more, the tennis world is filled with ongoing discussions and debates about such matters as the proper role of chair umpires, the way the code of conduct is constructed and, maybe above all, whether in-match coaching should be permitted everywhere.

On that last subject, there are those who would like to see it, such as the USTA itself — which lobbied, to no avail so far, the folks who run the other majors to approve coaching — or Williams' coach, Patrick Mouratoglou, who acknowledged right after last year's final that he was attempting to communicate with his player and also noted, correctly, that surreptitious coaching happens all the time and goes unpunished.

Says Allaster: "I understand it's polarizing, but ultimately, we have to look at how tennis competes and is relevant. ... Access is a key part of it; engagement with fans that want to hear from the players and coaches."

Says Mouratoglou: "I have never understood why tennis is just about the only sport in which coaching during matches is not allowed."

There are others, such as Roger Federer or the person in charge of Wimbledon, who think it goes against the very fabric of the game.

Says Federer: "I'm of the opinion that we shouldn't have coaching in tennis. ... It's what actually makes our sport unique."

It's a topic that hangs over the season's last major, even if there are plenty of results-related questions for the hard-court tournament's two weeks:

How healthy is Williams, who withdrew from two events because of back spasms? Can Osaka make another deep run? Will Wimbledon champion Simona Halep get past the semifinals at the only Slam where she hasn't? How will 15-year-old Coco Gauff follow up her run at Wimbledon? Can Federer, defending champ Novak Djokovic or Rafael Nadal make it 12 major titles in a row for the Big Three? Might a 20-something man finally break through?

None of that, though, is fraught with the greater significance of a possible rule change. As things stand, there is nothing consistent about coaching, a reflection of the each-week-is-different situation in a sport without a commissioner or a single rulebook.

"I wish (men and women) had coaching," said Sam Querrey, a Wimbledon semifinalist in 2017, "and you could talk to your coach whenever you want."

Grand Slam tournaments do not allow coaching, for male or female players, in main-draw matches, although the U.S. Open began trying it for qualifying and juniors in 2017.

The International Tennis Federation does allow it for Davis Cup and Fed Cup matches, even letting coaches sit courtside.

The ATP doesn't allow it for tournaments on the men's professional circuit.

Yet the WTA does let coaches come down out of the stands to talk to players during changeovers, something that was ushered in more than a decade ago — when Allaster was the CEO of the women's tour.

"Either have it everywhere or nowhere," 2016 U.S. Open runner-up Karolina Pliskova said, "but I prefer nowhere."