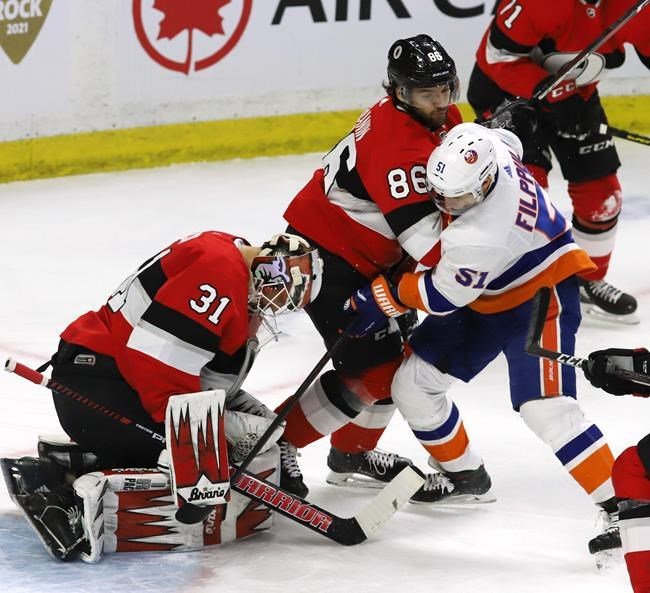 OTTAWA — Valtteri Filppula made sure his club took both games in a home-and-home set with the league's last-place team.

Filppula scored twice to lead the New York Islanders to a 4-2 win over the Ottawa Senators on Thursday to move into a tie with the Washington Capitals for first in the Metropolitan Division.

The Islanders opened the set with a 5-4 shootout victory at home on Tuesday.

"I think we can play better," Filppula said.

"At the same time we have to give them a lot of credit. They played well, played hard and hard to play against and made a lot of plays, but two wins, that's the main thing and hopefully we can keep going and build on this."

Brady Tkachuk and Oscar Lindberg scored for the Senators (23-39-6), while Anders Nilsson made 27 saves.

"I thought that was one of our most complete efforts in terms of time and players," said Ottawa's Mark Borowiecki. "I don't think we had any passengers out there. We were working hard and did a lot of good things, but got beat by a good hockey club."

After a dreadful second period the Islanders were fortunate to head into the third period tied 2-2.

"Those are periods that can't happen, especially at this time of the year," said Cizikas. "We want to create an identity and we want to play the way that we know how to be successful and when we get away from that we're an ugly team."

The Islanders caught a break and took the lead at the 12-minute mark after Ottawa's Zack Smith looked to give the puck to Nilsson, who was unable to freeze it, and Beauvillier shoved it in for his 16th of the season.

Cizikas scored into an empty net in the final minute of regulation to seal the victory.

"We had a little talk between the second and third," Cizikas said. "We weren't happy with that second period and we wanted to come out the way that we knew how to play. I thought we did a good job of that all four lines and all six (defencemen) and Greiss gave us some big saves."

Trailing 2-1 to start the second, the Senators tied the game midway through the period as Lindberg buried a rebound past Greiss.

Lindberg, acquired from Vegas as part of the Mark Stone trade, picked up his second goal since joining the Senators.

"I think all the guys that have come in here have sensed opportunity," said Ottawa interim head coach Marc Crawford.

"That was a big-time goal (Lindberg) scored."

The Senators dominated play late in the period, but were unable to get the go-ahead goal despite outshooting the Islanders 17-10 in the second.

The Islanders took a 2-1 first-period lead on goals by Filppula.

Leo Komarov made a great pass and Filppula beat Nilsson backand to open the scoring at the five-minute mark.

The Senators managed to tie the game soon after as Tkachuk, with his team-leading 15th, tipped Ben Harpur's shot.

"He's the kind of guy I'd take on my team as a go-to guy any day," said Borowiecki. "I think his game is going to keep growing and developing. He's such a competitive guy and he always wants to mix it up that you almost have to tell him to play his game and stop thinking about that a little bit."

New York regained the lead late in the period as Tom Kuhnhackl flung a puck from behind the net and Filppula was able to bat it past Nilsson for his second of the night.

The Islanders swept the season series 3-0-0.

The Senators lost Bobby Ryan in the third period as he appeared to injure his left hand, but Crawford didn't seem to think it was anything serious.