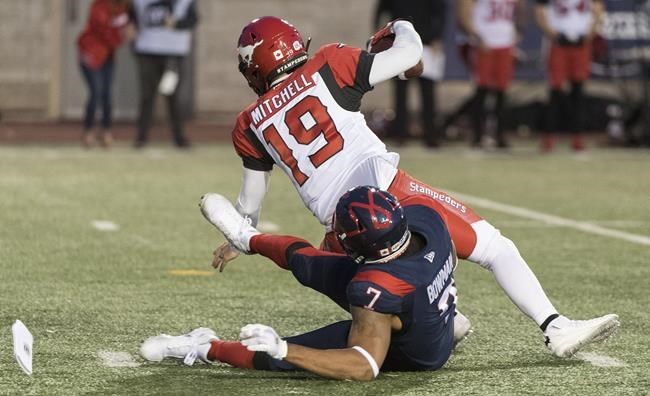 He's back in the CFL playoffs for the first time in five years, still playing at an all-star level, and has a head coach who's making him feel more than a decade younger.

But even all that's not enough to make John Bowman commit to playing a 15th CFL season.

The veteran defensive end will lead the Montreal Alouettes (10-8) into the East Division semifinal against the Edmonton Eskimos (8-10) on Sunday. The winner will face the host Hamilton Tiger-Cats (15-3) in the conference final Nov. 17.

It has been a season of resurgence for Montreal. The youthful Alouettes ended a playoff drought by registering double-digit victories for the first time since 2014 and did so with a new quarterback (Vernon Adams Jr.) and new head coach (Khari Jones).

"If you look at our team, we probably have the youngest team in the league as far as experience goes," Bowman said in an interview this week. "So having that steady hand at quarterback throughout the season, for sure, has been a benefit because everybody else has felt like they had to step up and match that intensity.

"A lot of guys believe in Khari because he makes you feel like you're invincible. He makes me feel, every day, like I'm 26 again and with that belief coming from your head coach and each individual player, you do amazing things."

Many felt this would the final CFL season for the 37-year-old Bowman. But the native of Brooklyn, N.Y., who has spent his entire career with Montreal, said he hasn't yet decided his future.

"For me, it's as long as I can contribute," Bowman said. "I wasn't going to come back last year just to be relic or for nostalgic purposes.

"I told (former head coach Mike Sherman and GM Kavis Reed) when they were trying to bring me back in February, 'Listen, if I'm going to come back it's going to be because I can play, not just because I'm John Bowman.' They said, 'If you couldn't play any more, we wouldn't ask you to come back.' I appreciated that faith that regime put in me and I'll talk to Khari at the end of the season and (president) Patrick Boivin and we'll see how things go."

"It (the all-star selection) is good but I don't take any credit for that," he said. "Most of the statistics come from guys being in the correct place at the correct time.

"I appreciate it, but I share it with my whole defensive line because without them I'm just another 37-year-old man."

The Alouettes' success has created quite a buzz in Montreal, where 20,000 tickets have been sold for Sunday's playoff game. That's prompted the organization to remove banners that had covered some sections of Molson Stadium, thus opening up an extra 1,600 seats, some of which will sell for as little as $39 apiece.

But even if Montreal's season doesn't end with a Grey Cup victory — Bowman has earned two CFL championship rings with the Alouettes (2009-10) — he feels much progress has been made.

"No, they (regular-season and playoff success) can be separated, in my opinion," he said. "To have accomplished what we've accomplished, in its own right, was just crazy because outside of two or three people outside of our locker room nobody predicted us going 10-8 and I felt like we could've won a few more games.

"We had a good regular season and nobody can take that away from us. Now, the post-season is different and we want to have a better post-season. We want to try to go 1-0 this week and go from there."

Montreal and Edmonton split their regular-season series 1-1, with each winning at home. The Eskimos' offence is anchored by quarterback Trevor Harris, who was the CFL passing leader for most of the season until suffering a shoulder injury Sept. 7.

Harris has played just one game since then but finished with 4,027 yards through the air. He had quite the debut with the Eskimos, completing 32-of-41 passes for 447 yards and three TDs in Edmonton's season-opening 32-25 home win over Montreal.

"I take nothing away from their offensive (line) because they're all big and very good," Bowman said. "But they also have a very good offensive system and he (Harris) gets rid of the ball fast and his pre-snap reads are some of the best in the league.

"You've got to get in his way, get into his throwing lanes and try to make him throw high balls. We didn't get a lot of sacks this year, we know that, but we were who we were. We were persistent, we got into lanes and forced bad throws and got interceptions and a lot of that comes from the stuff people don't notice up front. The dirty work, we'll say."

Bowman plans to use his experience to help his teammates Sunday.

"I just tell them, 'Don't make the moment bigger than it is,' " he said. "You've got to treat this game like it's the fifth game or 10th game of the regular season because if you say, 'We've got to play harder because it's the playoffs,' then you cheated me in those earlier games where we should've been playing hard.

"You can't give more than what you've been giving. Just keep doing what we're doing and not let the moment get bigger than what it is. And just have fun."

This report by The Canadian Press was first published Nov. 8, 2019.