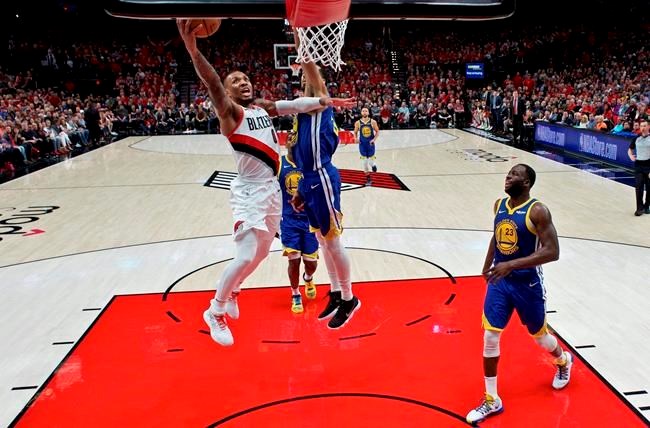 OAKLAND, Calif. — After four straight years of facing LeBron James and Cleveland in the NBA Finals, this feels refreshing for the two-time defending champion Warriors.

"For sure," Shaun Livingston said with a smile of taking on the upstart Raptors, "for sure, we'll leave it right there."

Off to Toronto, finally a fresh team that's tops from the East. Golden State is embracing every part of this new-look — well, the other half of it, at least — finals.

The Warriors coaches gathered Sunday to prep once they had an opponent, with the players taking a day off. Golden State is well-rested after wrapping up its Western Conference finals sweep of Portland on May 20 — giving the Warriors nine full days off between games.

Toronto won the Eastern Conference finals with a Game 6 victory against Milwaukee on Saturday.

This certainly isn't the familiar Cavaliers.

"That was the exception. This is more the rule," coach Steve Kerr said. "You're not supposed to play the same team every year. So that was a special era, a special rivalry and we're thrilled to be back. Cleveland has moved on and their team has broken up and with LeBron leaving the East, things were wide open.

"It was a hell of a ride through that East playoffs for Philly, Boston, Milwaukee, Toronto, all great teams, quality of play was something to watch. Toronto obviously emerged as the best team of the East and well deserved. The scene the other night was amazing to watch, too. The fans in Toronto have been amazing over the years. I've compared that arena to Oracle many times. When I was in broadcasting both the Raptors and the Warriors were really bad and yet every time I went to either arena there was this organic energy that felt so much alike, so similar. And there's just a genuine love for the game in both regions."

No chance of Golden State getting complacent preparing for the same opponent again in its quest for a three-peat.

This is the last hurrah for Oracle Arena, too, before the Warriors move across the bay to new Chase Center for next season.

"Everybody talks about it's hard to find that edge and get up for, (you) find some sort of monotony — I don't know if you find that in the finals — that's part of human nature that you fight," Curry said.

"So us getting on a plane tomorrow to go to Toronto, different energy, different city, different views, everything, should prepare us to lock understanding we have a prime opportunity to start off this finals series on the road and get a win and set the tone for how it's going to be.

"So I like the challenge and the unfamiliarity of this kind of schedule and flow. We've been there before, we've experienced a lot and this is I think something we're capable of doing."

The Warriors are motivated by everything that will be new for these finals.

"You get to go to a different city," Livingston said. "It was similar to what we did last year with Houston, starting on the road, just that sense of urgency, it's something different we haven't done in the last four or five years being the top seed. Now starting the finals it's something new for us. It's a challenge that we haven't had to face yet, so this is good for us."

While DeMarcus Cousins scrimmaged Monday for the second time since going down with a torn left quadriceps muscle in Game 2 of the first round against the Clippers, he is listed as questionable for the series opener. Cousins had returned Jan. 18 from a nearly yearlong absence following surgery for a torn left Achilles tendon only to get hurt again — a tough blow in his first career playoffs.

Now, jumping right back in on the finals stage will be tough.

"It's a lot to ask," Kerr said, without completely ruling out the chance Cousins could be cleared to return by Thursday. Two-time reigning Finals MVP Kevin Durant won't play Game 1 as he continues to recover from a strained right calf.

Curry has a special affinity for Toronto, where he spent two years in middle school when his dad, Dell, played for the Raptors from 2000-02. Curry's wife, Ayesha, grew up outside Toronto.

"I still don't think it's sunk in this is for the finals, so pretty special," Curry said.

He will be focused on bringing home Golden State's third straight title and fourth in five years — an NBA Finals MVP would mean so much — yet can still appreciate what Toronto is experiencing at last.

"In what 24 years of their existence and for them to finally get over the hump, you could tell how much it meant. The city was going crazy," Curry said.

"It looked like they had won the championship already the way that they were celebrating. It's the first time there, so the fans really got into it. It looked like a crazy atmosphere. In that short 24 years there's a lot of history and there were some great teams. I think it was 2002 the team my dad was on with Vince (Carter), Antonio Davis, Alvin Williams. ... They've gotten close and obviously the last couple years they've been struggling with Cleveland. There's a lot of passion up there for the game of basketball, for the Raptors. You could tell how much it meant."