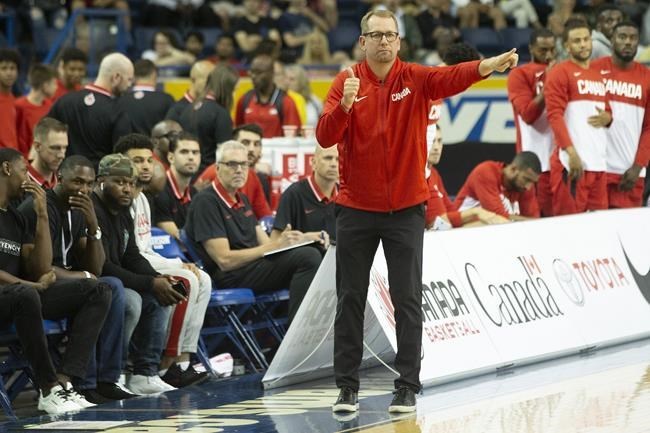 DONGGUAN, China — Nick Nurse could have been relaxing and recharging after the Toronto Raptors' heady and historic — and long — NBA championship run.

Instead, the 52-year-old Iowan was on the other side of the world on Saturday, a day before Canada's hodgepodge men's basketball team tipped off the FIBA World Cup against Australia, and a month into his gig as the squad's head coach.

International basketball is a different beast than the NBA. Long flights. Unfamiliar arenas. And for Nurse, a challenging Canadian roster missing all but two of its NBA players.

But the coach is loving every minute of it.

"This is all fun to me. Are you kidding me?" Nurse said. "I've never been to Australia (where Canada just played five exhibition games). I've never been to China. Every day is fascinating to me. It's such an adventure.

"In between there you get to coach basketball. You get to play in an incredible tournament in incredible venues. I just come outside every day and look around and say 'What an adventure.' How could this not be fun?"

Nurse leaned against a barrier that ringed the Dongguan Basketball Centre court, chatting with a couple of Canadians. He looked relaxed in his grey Canadian team sweatshirt. He showed no signs of fatigue from the long NBA season, or an equally busy off-season.

Nurse has barely taken a breath since the Raptors brought the Larry O'Brien Trophy to Toronto. He's jammed onstage with the Arkells. He sang "Take Me Out to the Ballgame" during the Chicago Cubs' seventh inning stretch against the San Diego Padres last month at Wrigley Field.

He and the national team have been on the road for nearly a month, going 4-3 in exhibition games in Canada and Australia.

No. 23 Canada faces a massive test right out of the gate on Sunday against 11th-ranked Australia in what's been dubbed the tournament's "group of death." No. 6 Lithuania and 33rd-ranked Senegal round out the group, and only the top two teams advance. The bottom two are relegated to the classification side of the draw.

"They are good and experienced. I coached against them in the 2012 Olympics and there's a lot of the same guys out there from seven years ago," said Nurse, who was an assistant with Great Britain's team through the London Games. "Obviously they've got a group of guys that play in the NBA that I see regularly."

Nurse, meanwhile, was tasked with piecing together a Canadian roster from players who toil on teams around the globe, all the while watching with hands tied as one NBA player after another passed on playing for the national team this summer. And the stakes couldn't be bigger. The goal is the 2020 Olympics, a global stage Canada hasn't played on since the 2000 Sydney Games.

Asked during Saturday's news conference about the Canadian team that could have been, Nurse said he's "given very little thought about 'the other' roster of players."

"These guys have been a complete joy to coach, played hard, played some great basketball in our leadup games, there's tremendous commitment here, there's good players too. I don't want anybody to mistake that," he said of his team in China.

Raptors president Masai Ujiri said it's never easy to lose a head coach for a good chunk of the off-season. But he admires Nurse's passion.

"That's what I love about Nick, it's that love for the game," Ujiri said. "And there's always something about international basketball, whether it's a thing you see, or a style of play. . . he's going to figure out somewhere or the other that helps him, because he's one of those open-minded coaches."

Nate Bjorken, who's both Nurse's longtime friend and an assistant with the Raptors and national team, said Nurse is perfectly suited to pilot the Canadian team, a mixed group of mostly European-based players, two NBAers in Cory Joseph and Khem Birch, and five Canadian university products.

"Nick has coached so many different teams all over the world," Bjorken said. "He's been a head coach since he was age 23, so he's been in a lot of different situations, he adapts very well to his team and he's very creative with his team.

"One of his strengths is he's got a great feel for for his players, he's got great practice feel on when to push guys, when to pull back, when to challenge guys, he's always had that feel. And . . . you've got to get your team ready to play in a short amount of time. You've got three weeks to get your team ready, he's very very good at that, knowing what the team's strengths are, and where ball needs to go, and how we need to play."

His profile in his rookie NBA head coaching season exploded during the Raptors' playoff. Whether it was the image of his mouth agape over a call, receiving an impromptu back rub from Drake, walking off a plane with his guitar slung over his shoulder, he became a social media fixture.

"He's a good guy, man," said Ejim, who plays in the Spanish League. "He's fun, a great coaching mind . . . there's a reason why we've been growing step by step, we've been playing better, we've been improving things, and I think that he's done a great job so far."

Canada faces Lithuania on Tuesday, then wraps up the preliminary round against Senegal on Sept. 5.