'What happened to Felipe?' Film helps Lopez tell his story 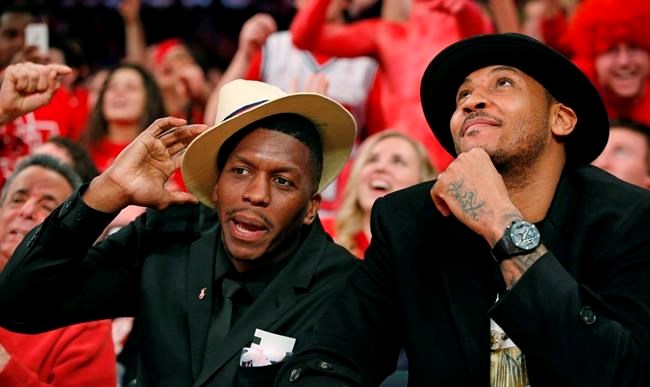 NEW YORK — Felipe Lopez somehow forgot what all the attention was like.

That would have been impossible to imagine 25 years ago, back when he practically owned magazine covers and newspaper headlines. But he has been out of the spotlight for a while, at least until it came time to promote a film about him.

Then it all came flooding back.

"I forgot that we are the capital of media," Lopez said with a laugh. "I'm going from 7 in the morning until like 7:30 at night for the past two days."

Imagine how it was when he was the biggest thing in New York basketball.

His story of a can't-miss kid who turned out to be more of a miss than a hit is told in "The Dominican Dream," which premiered over the weekend at the Tribeca Film Festival and debuts Tuesday night on ESPN.

Lopez was a heavily hyped high school superstar from New York in the early-to-mid 1990s who stayed in the city to play at St. John's, where he could never live up to the expectations that rivaled or surpassed anything Zion Williamson faced this year at Duke. He went on to a largely forgettable pro career, and he welcomed the opportunity to help people remember.

"People always wonder like, what happened to me? What happened to Felipe?" Lopez said in a phone interview. "A lot of people was able to get the story from the outside point of view, but not really get an in depth of everything and I think what the film is providing people is a little bit more of the in depth about not just my personal life, my triumphs and my lows, but also the story about perseverance and family."

Lopez moved to New York from the Dominican Republic as a 14-year-old eighth grader, a basketball prodigy from a place where baseball is king. After just a couple years he was ranked above Allen Iverson as the top player in his high school class, led Rice High School to a city and state championship, and his press conference announcing he would stay home for college was must-see TV for his fans.

"I can't think of anybody that got more publicity," former St. John's coach Lou Carnesecca says in the film. "He got eight pages in the Daily News. General Eisenhower, who won World War II, only got three."

Those pages were filled with negative news in the ensuing years. It wasn't until Lopez's senior season in 1998 that he finally made the NCAA Tournament.

Perhaps he would have been better off leaving before then, as he was urged to do. Lopez would have been a high draft pick before his freshman season, when he was on the cover of Sports Illustrated, or even after it, before the years of college allowed scouts to pick apart his game.

"But we had no clue about what the impact of that meant," Lopez said about leaving early. "So that's the reason why some decisions were made, just based on what I believed coming from the Dominican Republic, of staying on St. John's and forsaking the opportunity to go to the NBA."

He got there eventually as a late first-round pick in 1998 and played five seasons, averaging 5.8 points before his career was cut short by a knee injury.

His pro career was largely unsuccessful but his life certainly hasn't been. Lopez is active in the community through his foundation and NBA Cares, president of a community basketball team in the Dominican Republic, and has returned to St. John's at times in the two decades since he became his family's first college graduate to talk to players about how to be a professional.

So how would he answer that question he sometimes gets, about what happened to Felipe Lopez?

"Nothing. I'm alive. I'm good. I'm working," Lopez said. "I'm running a and trying to become the bridge to a lot of young talent I look at like myself, looking for an opportunity to make a difference for their family, for themselves, their community.

"And I know that I'm providing those opportunities for some kids."