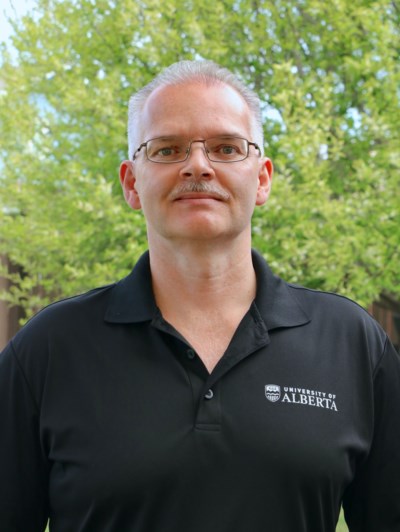 Frederick (Fred) Eugene Boyko, aged 53, passed away from cancer at home surrounded by family on Friday, November 27th, 2020. He is survived by his wife, Karen, son, Brandon, daughter, Amanda and countless family and friends who cherished him deeply. Born in Edmonton on December 20th, 1966 to Eugene and Irene Boyko, Fred grew up on the farm, the youngest of three children. The Boyko farm was in the Winterburn area, bordering Big Lake. Fred often told his wife and kids stories about the long, laborious days that started before dawn –tending to the fields, driving tractors, maintaining the machinery and helping his father with whatever needed doing. When he wasn’t working 23 hours a day, he was breaking snowmobiling speed records on the frozen Big Lake. Fred graduated with a BSc specialization in computing science from the University of Alberta in 1989. In 1990, Fred was hired as a programmer/analyst in the Department of Psychology at the U of A. Not only was his work ethic impeccable, but he was the mainstay on the Psychology slow-pitch team. As the pitcher, Fred walked no one. His mean, high-arcing backspin pitches were dreaded by all hitters. In addition to his athletic talents (like bench-pressing 305lbs surrounded by awestruck peers), his dedication to the Arts/Science Faculty is evidenced by his 30-year career, numerous awards, and the countless genuine relationships he built during his time with the University.

Fred fell in love with Karen nearly 30 years ago. After marrying on Sept. 21st, 1991, they built a home together in the Deer Ridge area of St. Albert and raised two children there. They had the privilege of spending 29 happy years together. Fred was fiercely dedicated to his wife and children – he never hesitated to make sacrifices for them and provided them everything they needed to grow and be successful and happy. He taught his children the importance of family relationships and values such as honesty, commitment, communication, and taking care of the ones you love.

Fred could always be counted on. He was a warm, reliable and caring friend, neighbour and co-worker. He was generous, gentle, and a good listener. Fred was our teacher, coach, and handyman. He was quiet yet resourceful in tackling problems and humble when it came to recognizing his successes – quick to praise the contributions of others. He was constantly fixing things and solving problems – ready to do the research, put in the work, and get the job done right. He was a jokester, he loved to laugh and be silly, often making up funny words and nicknames. He brought so much joy into the world. Fred had beautiful soft eyes and he gave the best hugs – in his arms, everything felt okay. It’s hard to believe that Fred battled chronic illness for most of his adult life, but through that he showed us how to preserve, adapt, and stay strong.

It’s ironic that Fred’s nickname was “Ice/Iceman,” as his heart was so warm. His passing leaves us with the task of figuring things out on our own now. But just as he persevered, learned, and continued to love in spite of hardships, so will we.

Due to Alberta Health regulations, there will be a celebration of life for Fred held at a later date to ensure the safety of those who wish to attend, as were his wishes.

“Life may be full of pain but that’s not an excuse to give up.”