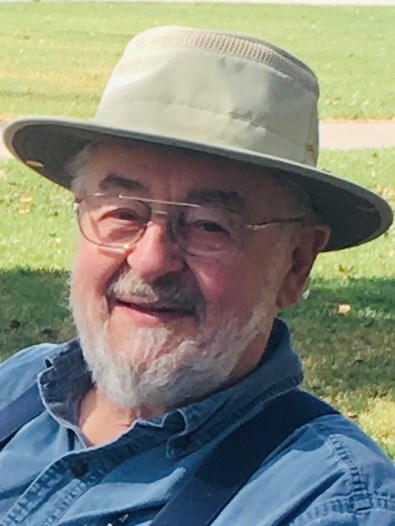 On September 20th, 2020, at age 90, Ray passed away peacefully in St. Albert, Alberta. He is survived by his children Harold (Arin) and Lorna Grude (Eric), grandchildren Zak, Logan, Claire, Kristin and Eric Jr., along with numerous extended family members.

He was born on August 15th, 1930, in Duchess, Alberta, the eldest child of Marlin and Anna Brubaker. He is survived by two younger sisters, Ruth Ramer and Wilma Hofer. He was pre-deceased by his wife of 64 years, Virginia “Ginny” Brubaker and his youngest sibling, Marlin Jr.

Ray grew up in a small Mennonite farming community in southern Alberta, irrigating crops with a shovel and a tarp and dreaming of becoming a farmer. On November 20th, 1955, Ray married Ginny, the girl from the farm next door, and soon after, as a mature student, he went back to High School to get his diploma. In 1957, they moved to Edmonton, and both enrolled in the Education faculty at the University of Alberta. Ray described his first year in University as a turning point that formalized a lifelong love of learning and teaching.  Ray was at heart, a teacher.

Ray and Ginny chose to adopt children when they were unable to have their own.  Ray always said they were just “lucky” to have children. He taught and re-taught Harold and Lorna about the “Golden Rule.” Ray also taught his children about the value of curiosity, perhaps his most enduring quality, which allowed him to constantly learn, grow, and marvel.

From 1958 to 1970, he taught in various small communities in northern Alberta for the Northland School Division while also returning to the U of A to upgrade his education. From 1970 until his retirement in 1990 he taught “Organizational Behaviour” at NAIT. Both before and during retirement, he devoted time to church, school, and community service organizations. He loved nature and being in it. Every day he worked on some kind of puzzle, read something, and went for a walk. He loved to write and respond to what others had written.

His greatest love, however, was for Ginny. Throughout their 64 years of marriage, Ray wrote love poems to her and always spirited her away somewhere for their anniversary weekend.  His love and devotion for her continued until and after her passing earlier this year. Throughout their marriage and particularly after Ginny suffered her stroke, Ray taught his grandchildren about unconditional love and gratitude.

His friend, Stephen Berg would have spoken at Ray’s memorial had COVID not intervened. He described Ray, in part, as “a Mennonite missionary, a high-school teacher, a college instructor (NAIT), a philosopher/theologian/metaphysician, a progressive questioner of his own tradition, a compassionate humanist, a mystic realist, with, to the end, an insatiable curiosity. An irrepressible, irreplaceable soul. “

Cremation has taken place and given the pandemic, no formal service is planned. We encourage each of you to reflect on Ray’s life in your way. In lieu of flowers, donations may be made to Mennonite Central Committee (Alberta).