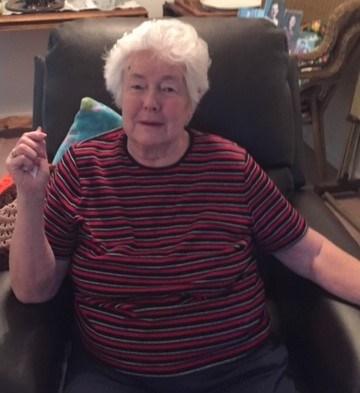 Lorraine June Ball was born June 20th, 1936 in the town of Athabasca. Lorraine is survived by her loving husband and best friend, her one and only love of 62 years, Kenneth Warren Moore of St. Albert, Alberta. Devoted mother and doting grandmother of Dale Moore and family, Rick (Karen) Moore and family, and her daughter Leanne (Wallace) Brenton and family. Lorraine is also survived by her sister Shirley Kormandy of Terrace, British Columbia. Preceded by her parents (John & Mabel), sister (Nora) and 2 brothers (Ted & Arthur). Lorraine was beloved in her communities in both Boyle and St. Albert, Alberta. Known for the extensive volunteer work and her participation within various groups throughout her communities, including but not limited to, Crime Watch, Women’s Institute, Food Bank and Seniors Center. Her love of helping has been passed down through her family members.

Lorraine has asked to not have a funeral but to have a celebration of her life, which the family will be doing privately. As many know, in Lorraine’s later years she was suffering with dementia and Alzheimer’s, with that said, in lieu of flowers to honor her the family requests that, contributions in her name be made to the Alzheimer Society of Alberta and Northwest Territories, which can be done through their website or by mail to the Allendale Professional Centre at 306, 10430 – 61 Avenue, Edmonton, Alberta, T6H 2J3.

“I’ll give you a daisy a day dear, I’ll love you until the rivers run still.”