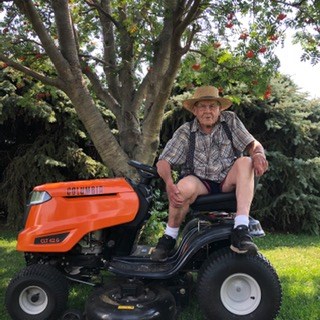 He spent his entire career since 1949 with the Village Of Legal as Town's Public Works Foreman, until his retirement in 1988.

Raoul founded the Legal Fire Department in 1949, and founded the Ambulance Service in 1965.

He was honoured for his many years of service and dedication to the town with medals, banners, etc.

Raoul always loved his flowers, garden, trees, you would always see him on his tractor keeping his yard beautiful, and driving around Legal in his Lexus.

He enjoyed many trips, camping, fishing with his children and grandchildren, also of course the yearly summer reunions.

Good times come and go, but the memories will last forever.

A Private Memorial Service was held June 22/2021 due to restrictions at the St. Albert Funeral Home, a slideshow will be available to view livestream until Sept 22/2021, through www.connellymckinley.com.

Raoul will be laid to rest on July 24/2021 in Legal. Only immediate family will be attending.

The family wishes to send a special thanks for caring and compassionate staff at Chateau Sturgeon Lodge in Legal, Homecare and Dr. Bernard.