Info on the Rise Up tournament and Morinville Wolves basketball
Dec 4, 2019 8:30 AM By: Jeff Hansen 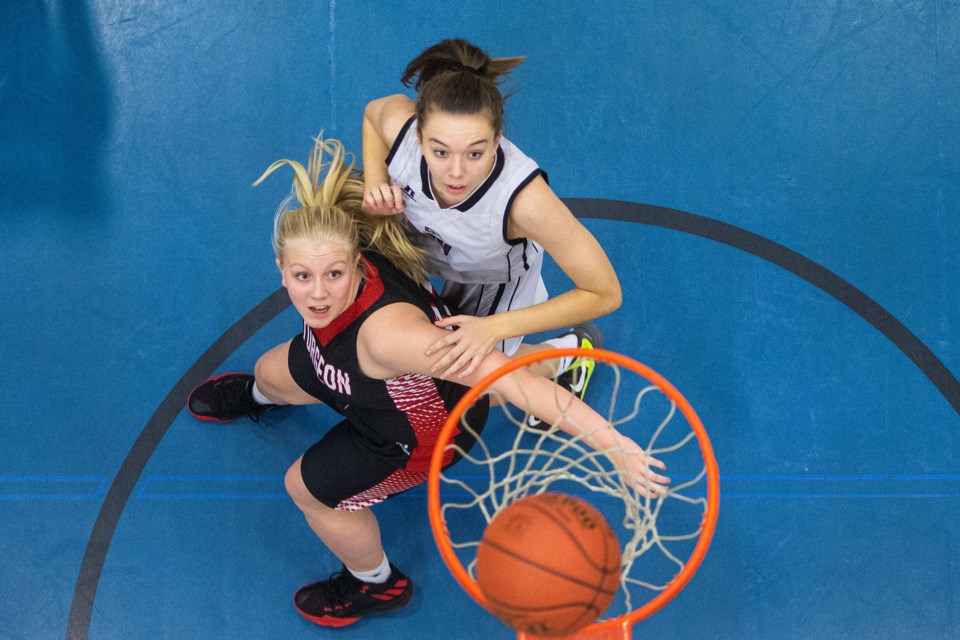 HOOPED – Bella Lutgen of the Sturgeon Spirits boxes out her opponent with the O'Leary Spartans at the 22nd annual Mike Dea Classic. The 74-27 loss was among three for Sturgeon against metro Edmonton division one teams. Sturgeon, a division two team, tipped off last week's tournament with the 60-53 win against the Lumsden (Sask.) Angels. Starting Thursday is the annual Rise Up at Sturgeon, featuring eight women's and 12 men's teams. The first game for Sturgeon, the host team for the 3A women's provincials in March, is 5:30 p.m. against the Morinville Wolves.

The Sturgeon Spirits are hosting eight women's and 12 men’s teams and several are from 3A schools.

In the women’s draw, Sturgeon’s first game is 12 noon against the Memorial Marauders of Stony Plain.

The 12:30 p.m. Friday game for Sturgeon is against the R.F. Staples Thunderbirds of Westlock or Bev Facey Falcons.

Saturday the women's consolation final and third-place game both start at 1:30 p.m. and the final is 5 p.m.

Sturgeon, the host team for the 3A provincials in March, kicked off the season last week with one win in four games at the 22nd annual Mike Dea Classic.

Sturgeon defeated the Lumsden (Sask.) Angels 60-53 before losing 74-27 to the O’Leary Spartans, 54-48 to the St. Peter the Apostle Spartans of Spruce Grove and 67-18 to the host St. Francis Xavier Rams. All three are division one teams in the metro Edmonton league and Sturgeon is competing in division two.

The Sturgeon men Rise Up at 2 p.m. Thursday against R.F. Staples. Friday the winner plays the Holy Rosary Raiders of Lloydminster at 9 a.m. in the quarter-finals and the loser will face the Archbishop Jordan Scots or Memorial in the C pool at 2:15 p.m.

Sturgeon is slotted in division three this season.

Tournament results will be posted nightly on the @sturgeon_athletics Instagram page.

The Morinville Wolves made their season debut in men’s and women’s basketball at the Jim Lazaruk Invitational last week at Salisbury Composite High School.

The score in the men’s match was 91-75 against the Eagles as Russ Foisy poured in 31 points and Matthew Osunde produced 23 points, 12 assists and five rebounds.

The semifinal was the 80-73 overtime loss to Camrose in physical battle. Osunde contributed 28 points, seven assists and eight rebounds and Foisy added 21 points.

The tournament opener was the 72-70 win against the Holy Rosary Raiders. Leading the way in the back-and-forth affair against a tough Lloydminster squad was Foisy with 23 points, plus Jacob Christensen’s 22 points and 15 rebounds and Osunde’s 11 points, 11 assists and eight rebounds.

In the women's draw, the Wolves clipped the Eagles 55-51 as Jordan Hessell dominated with 19 points and 18 rebounds.

The semifinal was the 72-30 loss to the host Salisbury Sabres, a metro Edmonton division one team, as the Wolves turned the ball over too many times against a tight defence.

On tap next is the Rise Up tournament hosted by the Sturgeon Spirits.

The lady Wolves, last year’s 3A provincial consolation champions by a score of 59-52 against Sturgeon, tangles with the Bellerose Bulldogs, the 2019 metro Edmonton division three champions, at 5:30 p.m. Thursday. Depending on the result, the next opponents for the teams will be the Archbishop Jordan Scots or Holy Rosary on Friday at 2:15 p.m. in the semifinal or 4 p.m. in the consolation bracket.

The Morinville men will take on the winner of the 3:45 p.m. Thursday tilt between Bellerose and Facey on Friday at 10:45 a.m. in the quarter-finals.

The loser in the Bellerose versus Facey game is back on the court at 7:30 p.m. Friday in the C pool against the Spruce Grove Panthers or Ardrossan Bisons.