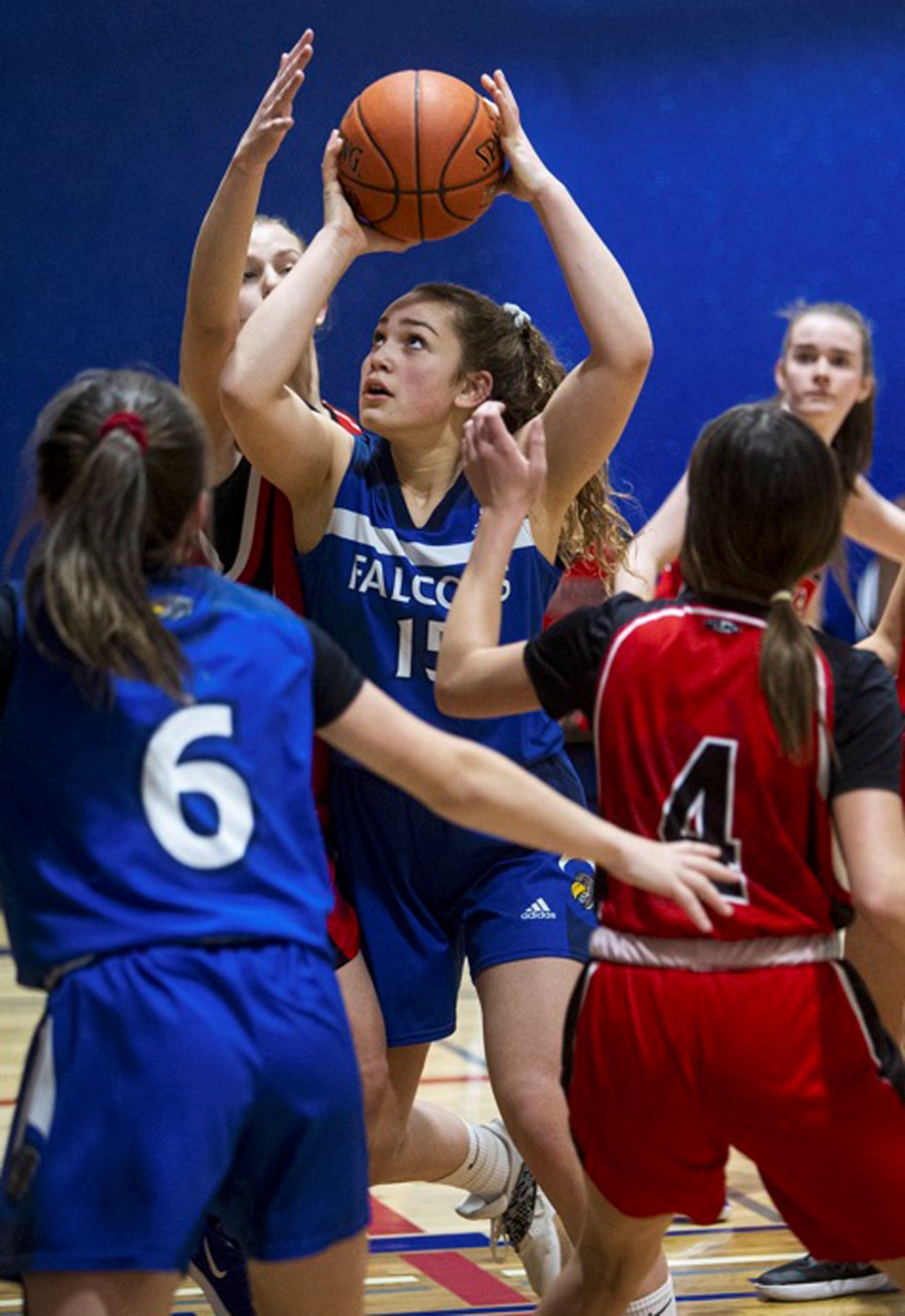 SHOT BLOCKER - Chloe Vogt of the Sir George Simpson Voyageurs sticks her hand in front of the shot attempt by Janay Williams of the Richard S. Fowler Falcons in last month's SAPEC Boston Pizza Invitational division A final. Simpson, the tournament winner, and Fowler, last year's Tier I city champion for the third year in a row, finished in a three-way tie for top spot with the Morinville Wolves at 7-1. The SAPEC playoffs start Monday and the finals are March 12 at 5:30 p.m. for the girls and 7 p.m. for the boys at the SkyDome. CHRIS COLBOURNE/St. Albert Gazette

A victory by the Paul Kane Blues in Monday’s metro Edmonton doubleheader would nail down second place in the division two men’s standings.

The Blues and Spruce Grove Panthers are tied for second at 8-2 behind the Strathcona Christian Academy Eagles (10-0), ranked fifth provincially in 3A.

In league play, the Blues are winners of four straight and one of the results was 76-52 against the Panthers at Paul Kane.

The Blues are 16-10 overall after going 2-1 as the consolation champions at last weekend’s tournament in Magrath.

The first game was against the second-ranked 4A Raymond Comets and with three minutes left in the second quarter the Blues led 41-40 before the Comets poured it on to win 110-78.

In the consolation bracket, the Blues overpowered Mount Baker of Cranbrook, B.C., 91-38 and the Catholic Central Cougars of Lethbridge 91-68.

Meanwhile, Monday’s doubleheader opener is the rivalry game between the Blues and St. Albert Skyhawks in the division one women’s league and the start time is 5 p.m.

The No.1-ranked 4A Skyhawks are 10-0 in league play and 27-1 overall as the defending provincial champions and back-to division one playoff winners.

One of the wins was 111-34 against the Blues in the Mike Dea Classic final Nov. 30 at St. Francis Xavier High School.

The Blues, an honourable mention in the 4A rankings, are 6-3 in division one and 16-8 overall.

Last weekend in Magrath, the Blues duplicated the men’s team consolation championship with wins of 70-46 against the Bev Facey Falcons and 75-61 against Catholic Central after a tough 74-64 loss to the No. 4-ranked 4A Comets.

The St. Albert Physical Education Council junior high basketball playoffs start Monday with the play-in games for the eighth seed in the boys’ and girls’ brackets.

Ranked first in the playoff rounds are the Lorne Akins Gators (8-0) for the boys and Sir George Simpson Voyageurs (7-1) for the girls.

Simpson finished tied with the Morinville Wolves and Richard S. Fowler Falcons, the SAPEC Tier I city champions three years in a row, and a tiebreaker determined top spot in the girls’ standings.

The metro Edmonton division two regular season ends Monday for the Bellerose Bulldogs with away games.

Tipoff times are 5:30 p.m. for the lady Bulldogs against the Lillian Osborne Legends and the Bellerose men against the M.E. Lazerte Voyageurs (6-4).

The lady Bulldogs, 8-2 in division two and 14-5 overall after winning last year’s division three championship, are playoff-bound with a home date scheduled against Ross Sheppard Thunderbirds (5-5) or Sturgeon Spirits (5-5) in the March 2 quarter-finals.

The two losses for the Bulldogs in league play were against the first-place Archbishop MacDonald Marauders, 66-44 Feb. 12 at Bellerose, and the second-place Strathcona Christian Academy Eagles, 59-47 Feb. 5 at Sherwood Park.

In the 3A provincial rankings, the Eagles are seventh and Sturgeon is 10th.

Sturgeon is the host team for the 3A provincials March 19 to 21.

The Bellerose men are below the playoff cutline at 2-8.