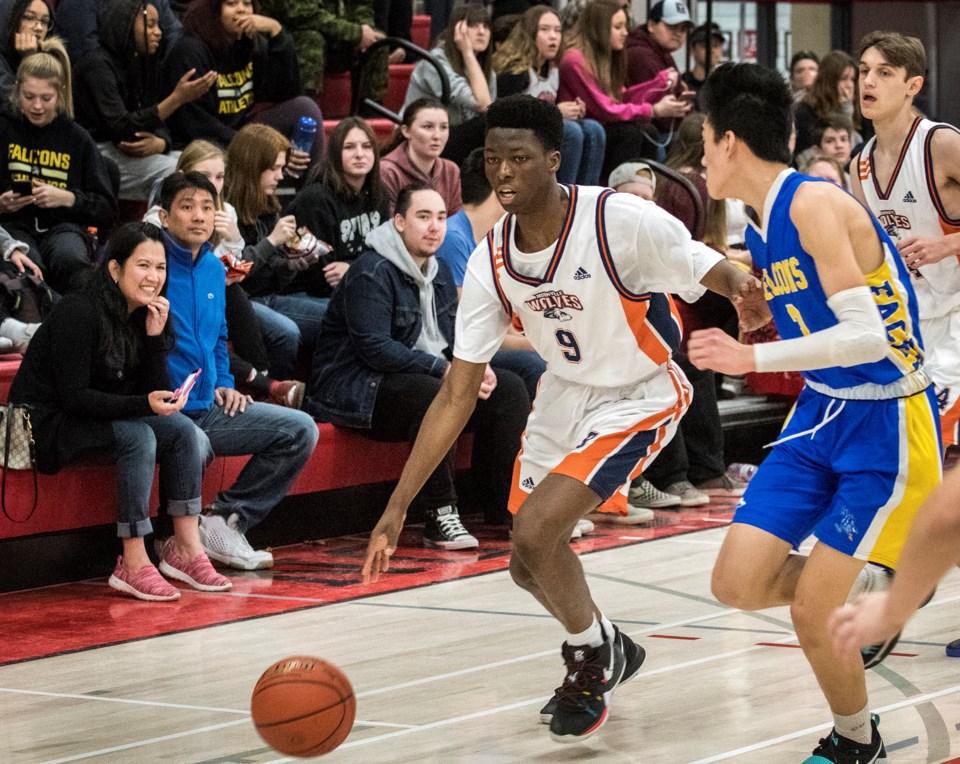 TOURNAMENT MVP – All eyes are on Matthew Osunde of the Morinville Wolves as the Rise Up tournament MVP for the second year in a row runs the floor against Tere Pare of the Bev Facey Falcons. The Wolves repeated as the Rise Up champions with wins of 80-53 against Facey, 79-75 against the Salisbury Sabres in the semifinal and 88-77 against the St. Peter the Apostle Spartans in Saturday's final. Osunde, a Grade 11 standout, averaged 25 points per game and his team-high 35 points against Salisbury included 15 in the fourth quarter. DAN RIEDLHUBER/St. Albert Gazette

The last loss for the 4A provincial gold medallists (30-5 last season) was 66-52 to the Jasper Place Rebels on Dec. 15 in the third-place game at the 2019 REB Invitational at Jasper Place.

The first game for the Skyhawks at the REB is 4 p.m. Thursday against the Strathcona Lords.

Depending on the result, the Skyhawks play the Western Canada Redhawks of Calgary or Salisbury Sabres on Friday in the 8 p.m. semifinal or 2 p.m. in the consolation bracket.

The Chino High Cowboys of Chino, Calif., and the Leboldus Suns of Regina, considered the No. 1 team in Saskatchewan, are also competing at the REB.

The Rebels are the Skyhawks’ main challengers in the metro Edmonton division one league with 12 returnees from the fourth-place team at the 4A provincials that finished 24-9 last season.

Last month in Saskatoon, the Rebels won the Bowlt Classic and the fourth win without a loss against Saskatchewan teams was the 58-19 final against the Campbell Collegiate Tartans of Regina.

The last tournament for the Skyhawks was the 22nd annual Mike Dea Classic and the final was the convincing 111-34 result against the Paul Kane Blues at St. Francis Xavier High School.

The Skyhawks, division one champions two years in a row, are 4-0 overall this season after Monday’s 97-56 division one win against the Spruce Grove Panthers at the SkyDome.

Today at 5:30 p.m. the Skyhawks host Strathcona in league play.

The Morinville Wolves did it again.

The men’s basketball team repeated as the Rise Up tournament champion at Sturgeon Composite High School and Saturday’s 88-77 final was against the St. Peter the Apostle Spartans.

The Wolves cranked it up down the stretch to defeat the metro Edmonton division one team from Spruce Grove in what head coach Cliff Rowein described as the team’s best full game of the early season.

Osunde, a Grade 11 scoring threat and the tournament MVP for the second year in a row, poured in 35 points in the 79-75 decision against the Salisbury Sabres, a division one team.

The Wolves managed only seven points in the third quarter to trail by six before Osunde picked up his scoring by draining 15 points in the last quarter.

Jacob Christensen finished the semifinal with 13 points and 11 rebounds.

The tournament opener in the 12-team men’s draw for the Wolves was 80-53 against the division two Bev Facey Falcons.

In the women’s draw, the lady Wolves finished 2-1 as the consolation champions after Saturday's feisty 55-45 affair with the Memorial Marauders of Stony Plain.

Leanne VanBrabant was the team’s offensive catalyst and Nadi Cater was a defensive standout.

The first game for the lady Wolves was the 61-49 loss to the Bellerose Bulldogs, the tournament champions, and the next game was 67-30 over the Holy Rosary Raiders of Lloydminster.

The lady Wolves, 2019 North Central zone champions for the second year in a row and 3A provincial consolation winners, are in action Thursday at the Louis St. Laurent Green & Gold Classic as the tournament champions the last two years. The Morinville men are also competing at the Green & Gold. Both teams play Thursday at 11 a.m. against St. Joseph of Grande Prairie at Cartier McGee School for the women and Louis St. Laurent for the men.

The Sturgeon Spirits finished third overall in the women’s draw as the host team at the Rise Up tournament.

Sturgeon’s first game was 71-24 against R.F. Staples Thunderbirds of Westlock and the semifinal was the 66-53 loss to the Bev Facey Falcons. Taylor McGrath was the top scorer against Facey, a metro Edmonton division two team, with 16 points.

The third-place game Saturday was 63-58 against the division one Archbishop Jordan Scots as Haylee Sidor led the attack with 24 points.

In Monday’s division one season opener, Sturgeon fell to the Bellerose Bulldogs 82-44 as Sidor racked up five three-pointers and 17 points overall for the visitors. McGrath added seven as Sturgeon trailed 34-23 at halftime and 64-28 after three quarters.

The next league game for the 2020 3A provincial hosts and 2019 consolation finalists is 6:30 p.m. tonight against the Beaumont Bandits at Sturgeon.