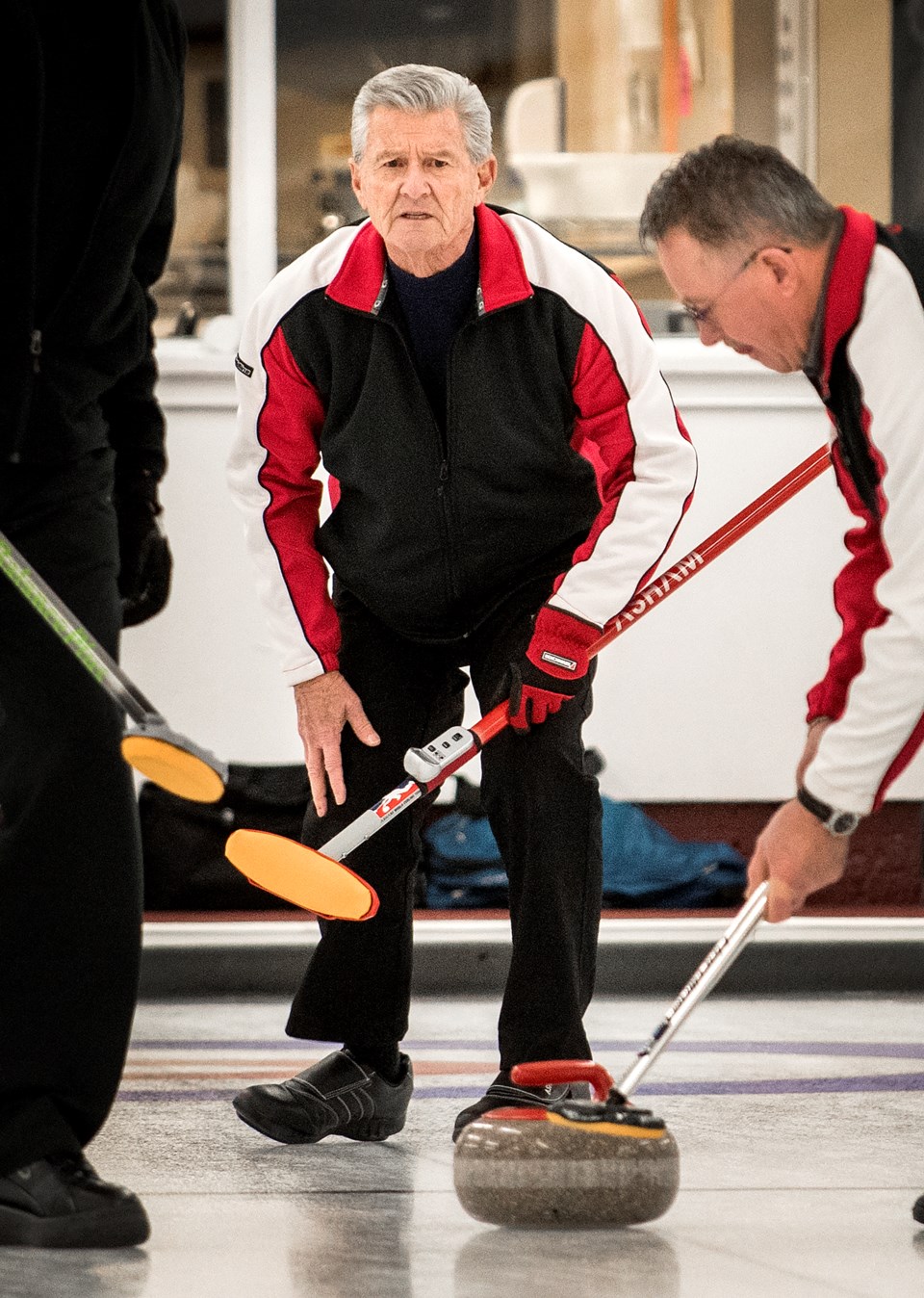 CHECKING IT OUT – Elson Keown of St. Albert watches the line after delivering a rock at the masters (60-plus) men’s provincial qualifier Friday at Crestwood Curling Club. Keown was the third for the Avonair rink of skip Keith Morgan, second Lowel Lyseng and lead Ray Ewing that finished 4-3 as the A finalists and B and C semifinalists in the 13-team triple-knockout competition. DAN RIEDLHUBER/St. Albert Gazette

Abby Marks of St. Albert is going to her second U21 nationals in a row and her first as skip after winning Sunday’s provincial final in Lloydminster.

The University of Alberta Pandas’ foursome of Marks, third Catherine Clifford, second Paige Papley and lead Jamie Scott defeated Zoe Cinnamon of Airdrie 6-4 for a berth at the Canadian championship, Jan. 18 to 26 in Langley, B.C.

Last year, Marks was the third and Papley the lead curling with skip Selena Sturmay and second Kate Goodhelpsen as the Alberta champions went 11-0 at nationals as the seventh team to go undefeated in the competition.

At worlds in Liverpool, N.S., Canada played Russia for gold and in the extra end Sturmay’s draw slid farther than expected to give up a steal of one in the 8-7 loss.

The first nationals for Marks, an Ecole Secondaire Sainte Marguerite d’Youville graduate, was the inaugural U18 Optimist championship in 2017 at Moncton, N.B., as the skip for Alberta with Papley, Scott and Brittany Brezinski on the fifth-place team.

At provincials, Marks, Cinnamon and Claire Booth of Red Deer finished the eight-team round robin at 5-2.

In the 8-4 semifinal against Booth, a three-ender in five resulted in a commanding 6-2 advantage for the Saville Centre based rink.

The final was decided with a deuce in nine to put Marks on top 5-4 and a steal of one in 10 ended the match.

The provincial opener for Marks was 6-5 against Cinnamon and the second loss in the round robin was 6-5 to Booth as the game ended with a deuce in 10 by the winning skip.

Also competing at provincials was the St. Albert rink of Rebecca Bartz, third Taitan Hagglund, second Rachael Hansen and lead Brennin Turner as they finished 0-7 and one of the losses was 9-5 to Marks.

The St. Albert rink skipped by Nathan Molberg came up one win short of competing in the U21 provincial final at Lloydminster.

Molberg, third Jacob Rahn, second Braden Pelech and lead Morgan Bilassy finished the round robin tied for second at 5-2 with Jacob Libbus of the Saville Centre.

In Saturday’s 8-6 semifinal loss to Libbus, Molberg counted three with the hammer in the opening end and lead 4-1 after three before Libbus rattled off singles in the next three ends. It was 5-4 Molberg when Libbus scored three in eight. Molberg answered with a single in nine and Libbus sealed the deal with one in the last end.

In the round robin, Molberg defeated Libbus 7-4 and fell 8-5 to Ryan Jacques of the Saville Centre.

Molberg closed out the win against Libbus with a deuce in eight and steals of one in the next two ends.

A four-ender in nine by Jacques determined Molberg’s second loss.

The final was 6-5 in an extra end for Jacques over Libbus.

Last year Molberg’s U18 rink of third Ben Helston, second Nick Workman and Bilassy represented Alberta at the Canada Winter Games in Red Deer and the Optimist nationals in Sherwood Park and finished one win short of competing in the medal round in both competitions.

Molberg’s current lineup will give it a go in the upcoming Boston Pizza Cup men’s playdowns and the last event of the season is 52nd annual Bill Ross Trophy bonspiel in April at Stockholm, Sweden through the Over The Pond curling exchange between the Nordic Junior Curling Tour and Marc Kennedy Junior Classic.

St. Albert curlers punched their tickets to the Alberta Winter Games with winning records in last month’s playdowns at Leduc.

The St. Albert rink skipped by Anders Van Amsterdam won the fourth qualifying berth for the boys in the eight-team triple-knockout draw and Anna Bakos of St. Albert is the second for the Alyssa Nedohin rink and the first qualifier in the seven-team girls’ draw.

Van Amsterdam, third Brand Colton, second Blaine Steffan and lead Cameron Molberg finished 3-2 with losses of 7-2 in seven ends to Zachary Davies of the Saville Centre in the first qualifier and 7-2 in six ends against Jordan Bauer of Red Deer in the second qualifier before prevailing in the fourth qualifier 9-4 in seven ends against Justin Sieffert of the Crestwood with seven points coming off steals in the last four ends.

The final for Nedohin was 7-6 in an extra-end against Emma Yarmuch of Ellerslie.

The Sherwood Park rink, with Chloe Fediuk at lead and third Natalie Cholin, stole a deuce in four to lead 5-1 before Yarmuch rallied with deuces in seven and eight to force the extra end.

The Nedohin foursome are gearing up for a return trip to the U18 provincials.

Yacey is the lead for the Saville Centre foursome that finished 6-1 in the U18 Calgary Youth Curling Association event during the Christmas break.

The third extra-end victory for Team Burton, with Oliver Burton at second and Justice Jacques at third, was 6-5 against Kenan Wipf of Calgary.

The final was tied at one when Wipf counted three in five and Burton replied with one in six and a steal of three in seven. Wipf answered with the tying point in eight before Burton counted the winning point.

The semifinal was another 6-5 decision in an extra end against Ben Kiist of Black Diamond. Kiist forced a ninth end with one in eight after Burton posted the go-ahead point in seven.

The lone loss for Burton was 6-4 against Kiist in the opening draw.

Burton’s 3-1 record in pool play included a 7-6 extra-end victory over Wyatt Wright of Cochrane. Burton scored three in seven to lead 6-5 after Wright tacked up a three-spot in six.

In the quarter-finals, Burton doubled Josh Kroker of Lethbridge 8-4.

Each curler on the winning rink received a $1,000 scholarship.