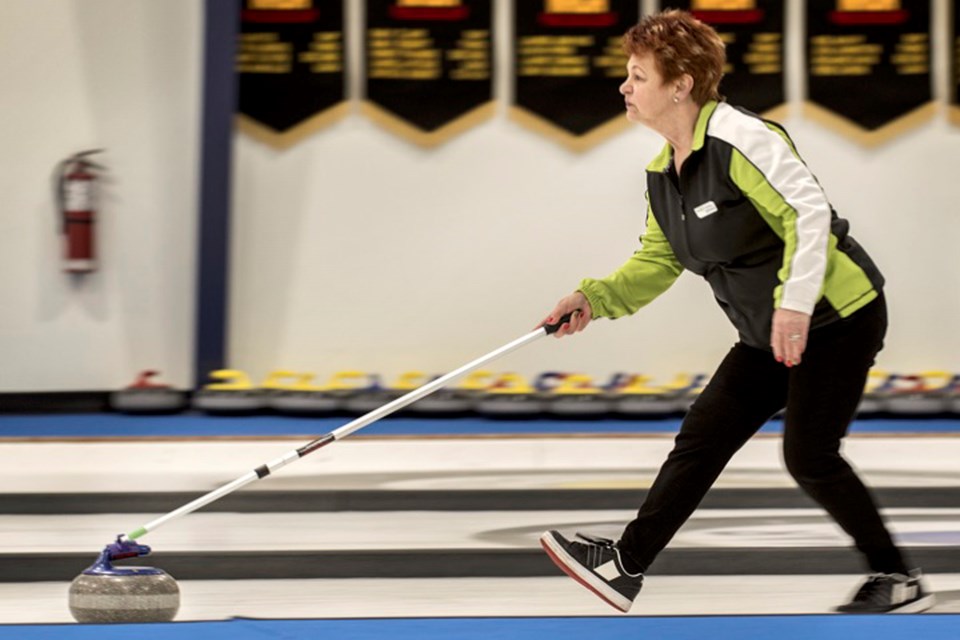 STICK STRAIGHT – Bonnie Germsheid pushes a rock during a delivery at the Select Rentals Stick Stakes Spiel in mid-December at St. Albert Curling Club. The provincial open two-person stick championship will be staged at the curling club Feb. 14 to 16 and the St. Albert duo of Ruby and Randy Olson of St. Albert are the defending champions. DAN RIEDLHUBER/St. Albert Gazette

Molberg was the men’s B qualifier against Chase Lozinsky of St. Albert and Bartz defeated Elysa Crough of Sherwood Park in the best-of-three women’s playoff.

Provincials start Wednesday at Lloydminster and the junior champions advance to nationals, Jan. 18 to 26 at Langley, B.C.

The men’s double-knockout format consisted of four rinks competing for two provincial berths and the A qualifier was Cortland Sonnenberg of Sexsmith with victories of 5-4 in an extra end against Molberg and 8-6 against Lozinsky.

In the A final, Sonnenberg scored four in five to make it 5-3 and after seven it was 6-4 when Lozinsky tied it with a deuce. Sonnenberg replied with the go-ahead point in nine and the steal of one in 10.

In the 7-6 B final, Molberg, third Jacob Rahn, second Braden Pelech and lead Morgan Bilassy counted points in only two ends against Lozinsky – three in four to open the scoring and four in seven to make it 7-3.

Lozinsky tied it at three in six and after blanking the eighth pulled off a deuce in nine and stole one in 10.

Molberg started off the playdowns against Sonnenberg and a steal of one in eight put the St. Albert side up 3-2. Sonnenberg replied with a deuce in nine, Molberg answered with one in 10 and the extra end determined the outcome.

At the 2019 U18 provincials, Molberg’s rink of third Ben Helston, second Nick Warkman and Bilassy doubled Sonnenberg 6-3 in the final.

The U18 Molberg foursome finished one win short of competing in the medal round at nationals and the Canada Winter Games representing Alberta.

Molberg’s second game in the playdowns was 11-1 in seven ends against Lis for a berth in the B final. The difference was a three in four before steals of three in five, two in six and three in seven.

In game three, Bartz, third Taitan Hagglund, second Rachel Hansen and lead Brennin Turner battled back from a 4-2 deficit with one in eight and steals of one in nine and 10 for the provincial berth.

The turning point in game two was a three-spot by Crough in four for the 4-1 lead and a deuce in eight to go up 7-3.

The playoff opener featured back-to-back deuces for Bartz and the second two-pointer was a steal to break a 4-4 tie in nine. Crough countered with a deuce in 10 and Bartz came through with the winning point in the 11th end.

The Dale Briske rink is among 13 competing in the 60-plus playdowns starting next weekend at the Crestwood.

Doug McLennan of St. Albert is the second for the Crestwood rink skipped by Mark Johnson with Gary Greening and Lance Dealy.

Elson Keown of St. Albert is the third for the Avonair rink skipped by Keith Morgan with Lowel Lyseng and Ray Ewing.

The first draw is 10 a.m. Friday with Briske playing Morgan and Johnson is up against John Cabaj of Sherwood Park.

Three rinks go to provincials, March 4 to 8 at Airdrie.

The finals are 2 p.m. Saturday and Sunday and 1 p.m. Monday.