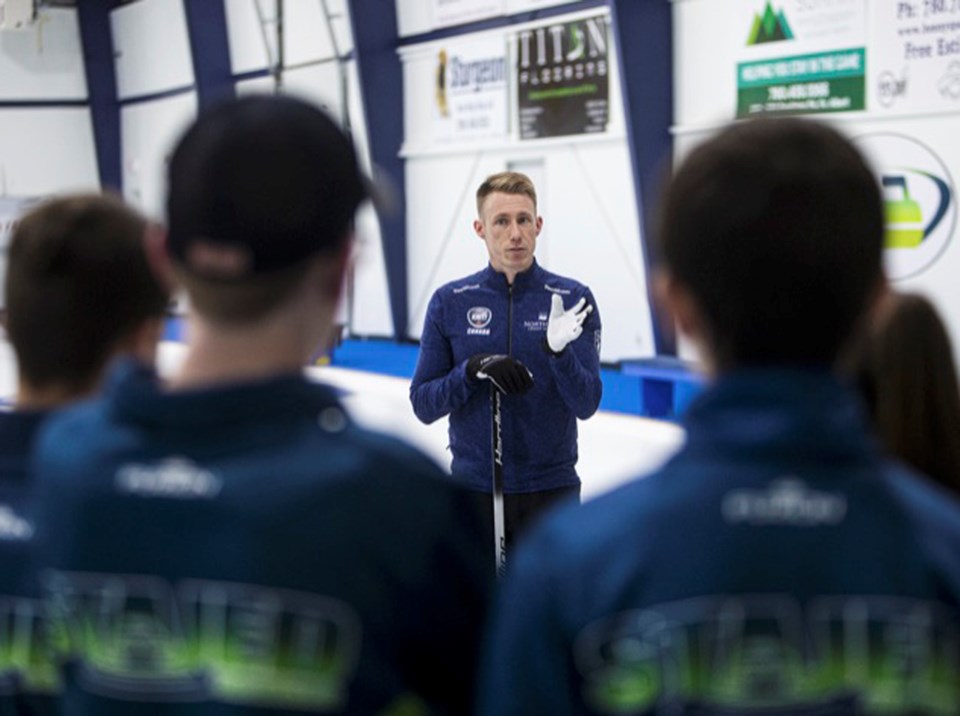 CENTRE OF ATTENTION – Marc Kennedy chats up members of St. Albert Junior Elite Development program at the Feb. 13 session on sweeping at St. Albert Curling Club. Kennedy, 38, is the third for Team Brad Jacobs, the Northern Ontario rep at the Brier starting today in Kingston, Ont. Kennedy is competing in his ninth Brier and the first curling with Jacobs, E.J. Harnden and Ryan Harnden. Kennedy, the team's third, is the winner of three Briers, two world championships, 15 Grand Slam events and an Olympic gold medal in 2010. CHRIS COLBOURNE/St. Albert Gazette

St. Albert curler Marc Kennedy slides into his ninth Brier with his third rink after winning Canadian championships in 2008 and 2009 with Team Kevin Martin and 2016 with Team Kevin Koe.

Kennedy, 38, is the third for Team Brad Jacobs and the first game for the Northern Ontario rink from Sault Ste. Marie is today at 5 p.m. against Team Brendan Bottcher of Alberta.

Sixteen rinks from 14 Curling Canada member associations, plus Team Canada and the wild card game winner, are seeded in two pools based on the Canadian Team Ranking System points list as of Dec. 31, 2019.

The top four rinks in both pools after the round robin advance to the championship pool for games against the other pool teams to determine the four qualifiers for the Page playoffs.

The winner of the March 8 final in Kingston, Ont., will represent Canada at worlds, March 28 to April 5 in Glasgow, Scotland.

Visit curling.ca for the schedule and results.

Team Jacobs, with second E.J. Harnden and lead Ryan Harnden, is No. 1 in the CTRS standings as well as the World Curling Tour’s money list at $138,500 and Order of Merit rankings.

The last Brier for Kennedy in 2017 with Team Canada was also his third in a row with Koe as the skip. Team Canada lost the final to Team Brad Gushue.

Kennedy was inducted into the St. Albert Curling Club wall of fame in 2011.

Julia Bakos of St. Albert, last year’s U18 provincial finalist, is also skipping a rink based in Cochrane.

The winner of the eight-team draw advances to nationals, April 21 to 26 at Sudbury, Ont.

Abby Marks of St. Albert is one of nine players selected by Curling Canada to wear the Maple Leaf at the 2021 world junior championships.

The competition in Beijing, China is also the first test event for the 2022 Winter Olympics at the Water Cube, the curling venue for the Games after hosting the aquatic events at the 2008 Summer Olympics.

Curling Canada is sending a women’s and men’s team to the 2021 world juniors featuring age-eligible players who competed at a high level this season.

With the dates of the Canadian U21 junior championship being shifted to later in the season starting next year to allow for a longer playing season for the juniors, the winners of the 2021 nationals will attend worlds the following year.

Marks is joined by teammates’ Catherine Clifford of Chauvin and Jamie Scott of Edmonton from the 2020 Alberta junior championship rink and finalists at nationals in January at Langley, B.C.

Brianna Cullen of Beausejour, Man., who will be attending the University of Alberta in the fall and training with Marks, Clifford and Scott with the university’s curling program, was also named to the women’s team.

A fifth member will be declared at a later date.

Marks was the third for skip Selena Sturmay, second Kate Goodhelpsen and lead Paige Papley as the 2019 Canadian junior (11-0) champions and silver medallists (7-4) at worlds in Liverpool, N.S.

At this year’s nationals, the Alberta rink skipped by Marks, with Clifford at third, Papley at second and Scott at lead, finished 9-5 after losing the final 10-3 in nine ends to Mackenzie Zacharias of Manitoba (11-0).

The first nationals for Marks as skip was the inaugural 2017 U18 Optimist championship as her Alberta rink of Papley, Scott and Brittany Brezinski placed fifth (5-3).

Marks, 20, is a nutrition and food science student who graduated from Ecole Secondaire Sainte Marguerite d’Youville.