Results for Sturgeon and Bellerose teams and minor football updates
0
Sep 18, 2019 6:00 AM By: Jeff Hansen 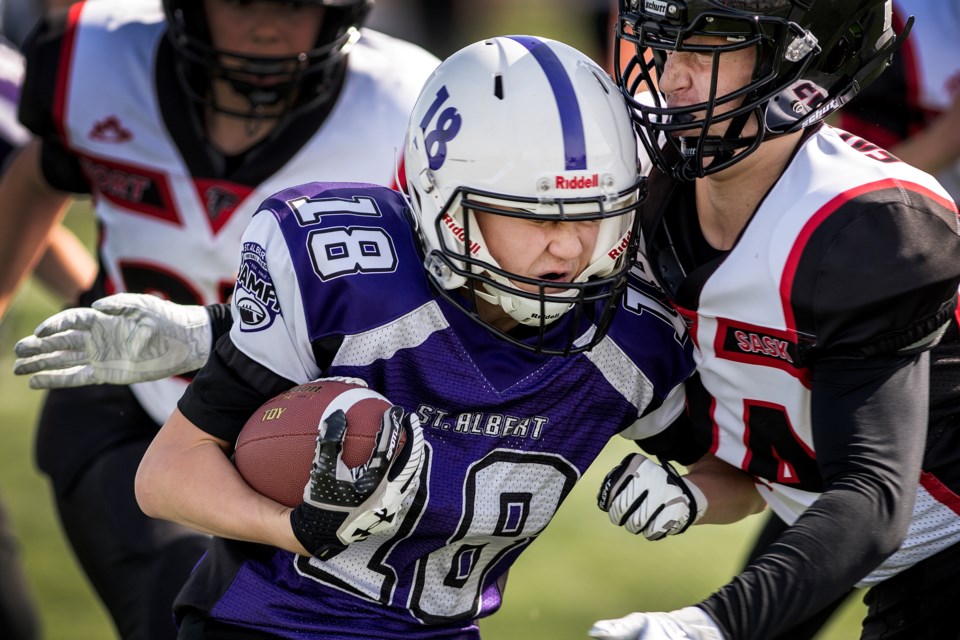 MARKED MAN – Joshua Mah of the junior varsity St. Albert Fury attracts the attention of a defender with the Fort Saskatchewan Falcons in Sunday's bantam game in the Marv Mills Division of the Capital District Minor Football Association. The Fury (0-2) lost 37-15 at Larry Olexiuk Field.

The Sturgeon Spirits bounced back in a big way after losing their season opener.

After the 28-7 setback to the Paul Kane Blues in the division two Miles/division three Gilfillan pool A game, Sturgeon regrouped to beat the Strathcona Lords 30-15 Thursday at Emerald Hills Turf Field.

“Overall, it was a much better performance,” said Chad Hill, head coach of the No. 7-ranked Tier III (450 to 749 students) team in the province. “Our D was very physical and offence had some flashes, but we have to be able to run the ball more consistently.”

Sturgeon was led offensively by wideout Will Campbell’s 200-plus all-purpose yards, including seven receptions for 150 yards and two touchdowns, and quarterback Zach Froese was 13-for-26 passing for 225 yards and three TDs.

The additions of Steurmer, an athletic transfer from Fort Saskatchewan and last year’s Metro Athletics All-Star and All-Edmonton Gilfillan Team linebacker selection with the Sting who was making his Sturgeon debut against Strathcona, and Karl Haasz, who tore his ACL at the midget spring league St. Albert Storm practice in Grade 10 and missed all of last season and the Paul Kane game, bolstered the team’s front seven defence.

After a scoreless first quarter, Campbell was on the receiving end of two TD passes and Philip McLay converted both scores.

Strathcona (0-1-1) answered with a 70-yard catch and run TD before the break. The convert was unsuccessful as Sturgeon led 14-6 at halftime.

In the third quarter, lousy field position and a couple of penalties left Sturgeon pinned deep in its end for Strathcona to pound the ball into the endzone. The two-point conversion pass was also good to tie it up.

Strathcona recovered the on-side kick, but the defence held and Sturgeon never looked back..

Early in the fourth quarter, Sturgeon lined up for a 37-yard field goal, but instead ran a fake as Froese hit Riley Fox for the TD and the convert was successfull. As the game wound down, an offside flag nullified Campbell's third TD of the match.

Rory Seewalt’s 50-yard pick six sealed the win and the convert made it 29-15.

Another punt single in the second half ended the scoring and Brayden Bramley closed out the win an interception.

Last year Strathcona finished 2-4 in the division one Carr conference while Sturgeon went 6-2 as the Gilfillan finalist as a first-year metro Edmonton high school football team.

Tuesday’s score against the O’Leary Spartans (1-0-1) at Larry Olexiuk Field was unavailable at press time.

The next game is 5 p.m. Friday against the Beaumont Bandits (0-1) at St. Albert. Last year in the Gilfillan, Sturgeon defeated Beaumont 47-12 in league play and 37-7 in the semfinals.

The Bellerose Bulldogs chewed up the Ross Sheppard Thunderbirds in week two of the division one Carr conference season.

The Bulldogs piled up 33 unanswered points in the second quarter, en route to the 57-14 blowout Friday at Larry Olexiuk Field.

Shep (1-1) opened and closed the first quarter with touchdown runs of 103 and 20 yards.

Tristan Olenick completed 15 of 20 passes for 408 yards and three TDs, and Jayden Randall was 1-for 3 with a four-yard TD pass to Max Taylor in the third quarter.

Randall also ran for TDs of 19 and four yards in the first quarter while gaining 58 yards on eight attempts.

Adam Rafat finished with five receptions for 166 yards and TDs of 74 and 45 yards in the second quarter.

Jonas Hazelaar led the defence in tackles with three and sacked the quarterback once along with Jevan Godsmark.

Caleb Holt also returned a fumble four yards to the endzone before halftime.

The Bulldogs were coming off a 49-9 drubbing at the hands of the Harry Ainlay Titans (2-0) to kick off the metro Edmonton schedule. Last year’s Alberta Bowl Tier I (1,250-plus students) finalists and winners of back-to-back Carr championships are ranked sixth in Tier I.

Saturday’s kickoff times at Larry Olexiuk Field are 9:30 a.m. for the senior varsity bantam Palmer 49ers (1-1) against the Millwoods Grizzlies (1-1) in the Susan Morgan Division and 12 noon between the senior varsity peewee Riders (1-0) and West Edmonton Raiders (1-1).

Last weekend’s scores from games played in St. Albert were 48-0 for the 49ers against the Edmonton Mustangs (0-2) and 54-0 for the Riders over the Fort Saskatchewan Falcons (0-2).

The junior varsity bantam Fury (0-2) are in Fort McMurray on Saturday to play the Knights (0-2) in the Marv Mills Division while the junior varsity Colts (0-3) huddle up Sunday in the peewee nine-a-side division against the Northstars (3-0) at 12:30 p.m. at Emerald Hills Turf Field.

Both St. Albert teams are coming off home-field losses last weekend of 37-15 for the Fury against the Falcons (2-0) and 26-6 for the Colts against the Wolverines (1-2).