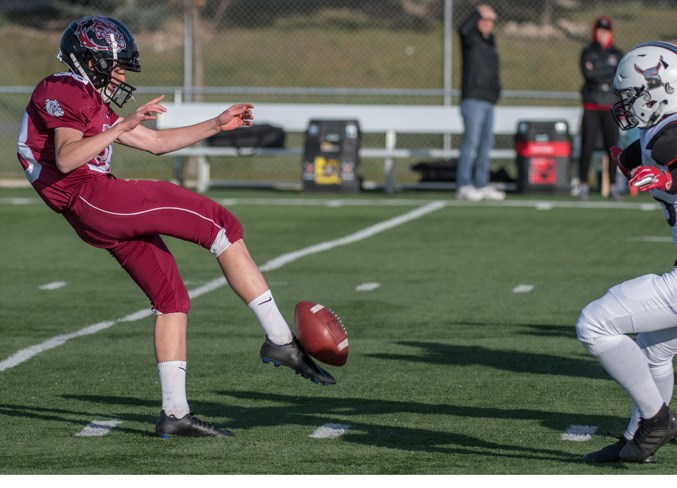 KICKING IT – Noah Birdsell punts the ball for the junior Bellerose Bulldogs in Tuesday's 48-16 loss to the Salisbury Sabres (2-0) at Larry Olexiuk Field. The next metro Edmonton game for Bellerose (1-1) is Tuesday versus the O'Leary Spartans (1-1) at 7:30 p.m. at Clarke Stadium. JOHN LUCAS/St. Albert Gazette

With two games remaining before the playoffs, the Bellerose Bulldogs are regrouping after back-to-back losses in the division one Carr conference.

Bellerose (2-3) hosts the Jasper Place Rebels (0-5) Friday on Senior Night at 7:30 p.m. at Larry Olexiuk Field and the last game before the metro Edmonton league playoffs is Oct. 18 against the Spruce Grove Panthers (3-2) at 6 p.m. at Fuhr Sports Park.

The Panthers are a potential playoff opponent for Bellerose as six teams qualify for the post-season starting Oct. 25 and the top two have first round byes.

The second loss for Bellerose after winning two in a row was 49-15 against the Salisbury Sabres (5-0) Thursday in Sherwood Park. The halftime score was 21-7.

In week five of the Football Alberta Tier I (1,250-plus students) rankings, Salisbury is No. 2, the defending Carr champion Harry Ainlay Titans (5-0) are No. 5 and the Panthers are No. 10.

Home games are on tap this weekend for St. Albert’s bantam teams in the Capital District Minor Football Association.

Kickoff times at Larry Olexiuk Field are 9:30 a.m. today for the senior varsity Palmer 49ers (2-2) against the West Edmonton Raiders (1-3) in the Susan Morgan Division and 12 p.m. Sunday for the junior varsity Fury (1-3) against the Edmonton Seahawks (3-1) in the Marv Mills Division.

Last weekend the 49ers lost 46-8 to the Spruce Grove Cougars (4-0) at Fuhr Sports Park and the Fury were victorious 51-6 against the host Wetaskiwin Warriors (2-2).

Scores from last weekend were the 18-12 loss for the Riders against the Spruce Grove Cougars (4-0) at Fuhr Sports Park and the 34-0 setback for the Colts against the Beaumont Bears (5-0) at Millwoods.

• Vikings: Cole Wallace and Jake Orazietti pressured the quarterback throughout the 21-0 shutout of the Edmonton Mustangs.

• Jaguars: Lucas Massey and Alexander Anderberg scored TDs in the 21-14 loss to the Beaumont Bears.

• Buccaneers: The offensive line led the way for TDs by Cameron Foster and Daniel Talaber in the 28-14 loss to the Edmonton Raiders.

A run by Mason Yaremcio and receiver Sophia Rees also contributed to the offensive attack while Madeline Neale and Lincoln Foster assisted the defensive charge.

Sunday’s jamboree game times at Fort Saskatchewan are 12 noon for the Vikings versus Sherwood Park Rams Gold and 1:30 p.m. for the Buccaneers against Wolverines White and Jaguars versus Wolverines Gold.