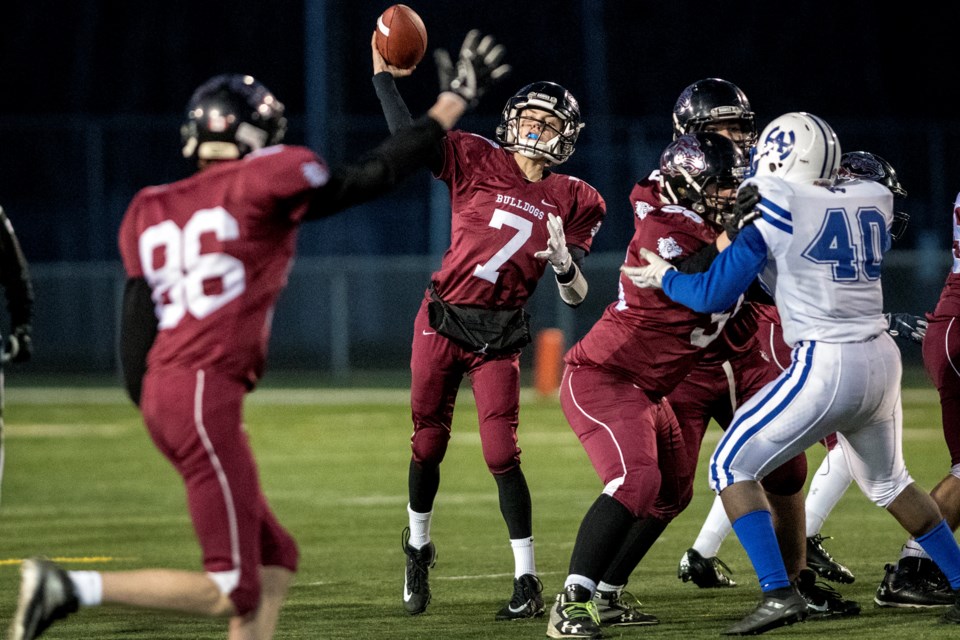 PLAYING CATCH – Bellerose Bulldogs’ quarterback Evan Cox attempts a pass to Parker Wolansky while Nick Ali provides blocking support against the Harry Ainlay Titans in the metro Edmonton junior playoffs. Bellerose (4-2) won the division one pool B semifinal 24-13 and in the final lost 50-0 to the pool A Salisbury Sabres (6-0). Bellerose also dropped a 48-16 decision to Salisbury in the pool A versus pool B regular season. DAN RIEDLHUBER/St. Albert Gazette

The junior Bellerose Bulldogs finished the season with two losses and both were against Salisbury Sabres.

The score in Tuesday’s division one final was 50-0 as Salisbury three-peated as metro Edmonton champions.

Bellerose fell behind by 22 points in the first quarter and trailed by 29 at halftime and 36 after three quarters at Clarke Stadium.

The week before in Spruce Grove, the Bulldogs out-scored the Panthers 49-42 in the last game before the playoffs to determine fourth and fifth place in the standings.

The Bulldogs and Panthers alternated throughout the season as the 10th ranked Tier I (1,250-plus students) team in the province.

Last year’s Bulldogs finished 3-4 after falling 49-14 to the Austin O’Brien Crusaders to kick off the Carr playoffs.

St. Albert’s bantam and peewee teams were shut out in the opening playoff round of the Capital District Minor Football Association playoffs.

Last weekend’s scores are as follows:

Susan Morgan division Tier I semifinal: 46-0 for the Spruce Grove Cougars (8-0) against the senior varsity Palmer 49ers (4-4) at Fort Saskatchewan.

Consolation final (ninth versus 10th) in the nine-a-side division: 43-0 for the Wetaskiwin Warriors (2-6-1) against the junior varsity Colts (0-9) at St. Albert.