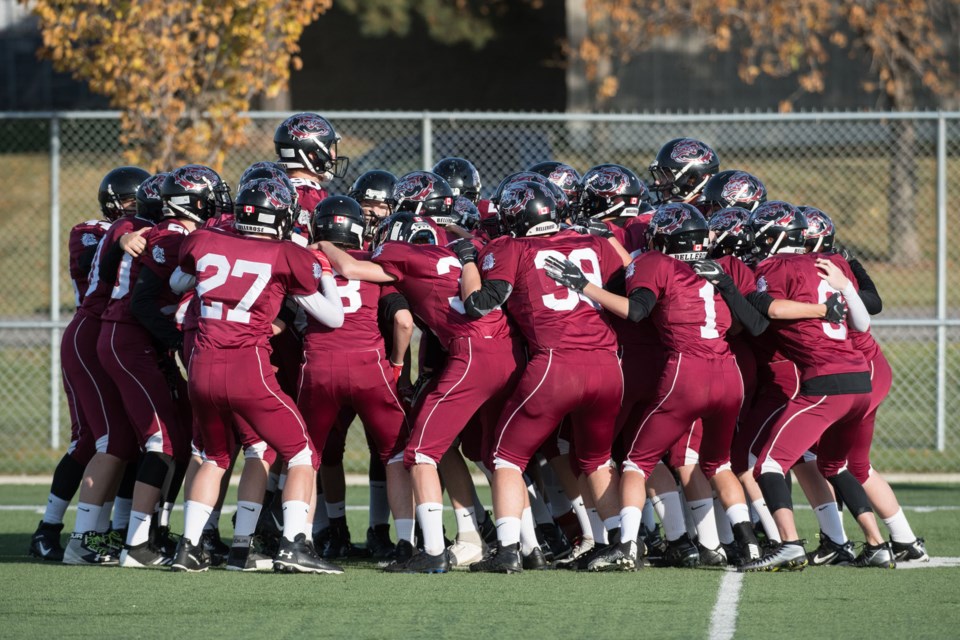 UNITED AS ONE – The Bellerose Bulldogs go through their pre-game ritual in the metro Edmonton junior football league. The pool B Bulldogs are 2-1 against pool A teams and 3-1 overall when the juniors host the pool A Austin O'Brien Crusaders (1-2) Tuesday at 5 p.m. at Larry Olexiuk Field in the last game before the Oct. 23 playoffs kick off. JOHN LUCAS/St. Albert Gazette

Tuesday marks the last game for the Bellerose Bulldogs before the playoffs in the metro Edmonton junior football league.

Kickoff is 5 p.m. at Larry Olexiuk Field between the pool B Bulldogs (2-1) and pool A Austin O’Brien Crusaders (1-2).

The top two teams in both pools go head-to-head in the Oct. 23 semifinals for berths in the division one final Oct. 29.

The second shutout win in three games against pool B teams for Bellerose (3-1 overall) was 37-0 against the O’Leary Spartans (1-2) Tuesday at Clarke Stadium.

The Riders are coming off the 58-6 win against the Edmonton Seahawks (1-3) last weekend in St. Albert.

The last game for the 49ers was 50-6 against the West Edmonton Raiders (1-4) last weekend in St. Albert.

League play wraps up next weekend for the bantams and peewees before the playoffs kick off.

• Chase Crandall’s first touchdown of the season for the Buccaneers highlighted the 56-14 victory against Wolverines White.

• The defensive battle between the Jaguars and Wolverines Gold ended in a 7-7 draw.

• The Vikings lost 35-21 to the Sherwood Park Rams as the defence soldiered through some tough injuries.