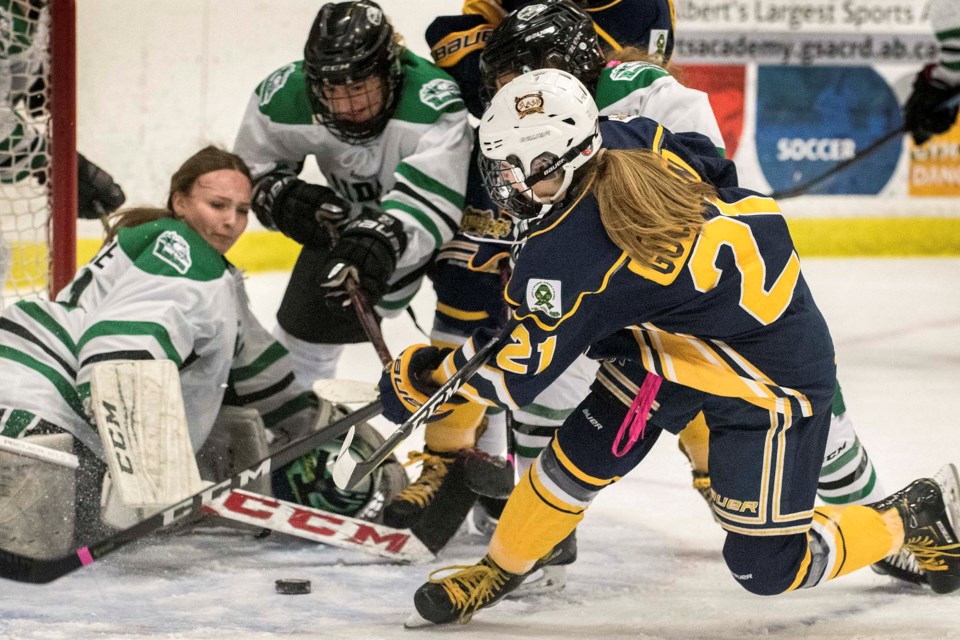 UNMASKED – Jenna Goodwin of the St. Albert Slash directs the puck into a crowded crease that includes netminder Hali Lawrence of the Rocky Mountain Raiders, who lost her mask in the scramble during the first period of Sunday's home opener in the Alberta Female Hockey League. The Slash, winners of the last three Esso Cup midget AAA national championships, won 3-2 in a shootout at Go Auto Arena. Goodwin scored twice in regulation time and once in the shootout. DAN RIEDLHUBER/St. Albert Gazette

The Slash posted victories of 4-1 against the Lloydminster Steelers (0-2) at Morinville and 3-2 in a shootout against the Rocky Mountain Raiders (0-0-2) at Go Auto Arena.

Jenna Goodwin’s second goal against the Raiders made it 2-0 on the power play in the second period.

The tying marker by the Raiders was scored with the man advantage with 6:27 remaining in the third.

Goodwin and Kelsey Hall also connected in the 2-1 shootout frame.

Shots were 33-18 for the Slash in support of netminder Mabel Maltais.

The winners of three consecutive Esso Cup national championships have 11 returnees from last season’s 36-5-2 team that went 26-3-1 in league play.

This weekend the Slash travels to play the Raiders at 2:30 p.m. Saturday in Dewinton and the Calgary Fire (2-0) at noon Sunday at Father David Bauer Arena.

The St. Albert Nektar Raiders are off to a winning start in the Alberta Midget AAA Hockey League.

Last weekend the Raiders skated past the KC Pats 4-1 at Castledowns Arena and blanked the Southside Athletic Club 3-0 at Jarome Iginla Arena.

Andreai Proctor-Ramirez stopped 16 pucks for the shutout after facing 17 shots by KC.

Breck McKinley and Koehn Zimmer also scored as the Raiders were credited with 42 shots.

Among the 44 shots against the Southside were Noah Wilson’s two goals and another by Dube.

The Raiders have five players back from the 2019 Mac’s Cup champions and AMHL north division pennant winners and provincial finalists.

The St. Albert Merchants are winless in three games as the junior B hockey team visits the Spruce Grove Regals tonight.

Mitchell Reidy made his Merchants’ debut in net with a game-high 46 saves.

Kiegan Miller, Cole Gupta and Jack Langenhahn scored as the Merchants trailed 2-1 after the first period and 4-3 entering the third. The insurance marker for the Riggers in the third was also the team’s second power-play goal of the night.

The Merchants finished with 27 shots after being outshot 16-7 in the first.

The weekend started with Friday’s 5-3 loss to the North Edmonton Red Wings (4-2) at Jarome Iginla Arena.

The Merchants led 2-0 and 3-2 on goals by Gupta (power play), Zach Giacobbo and Stuart Dovey before the Red Wings found the back of the net three times in the third and the winner was scored with 8:25 to play.

Sunday the Merchants face off against the host Wetaskiwin Icemen (2-3) at 6 p.m.

The fifth loss in six games for the Morinville Jets was also the third on home ice in the Capital Junior B Hockey League.

The Beaumont Chiefs (5-2) lit the lamp four times in the first period en route to the 7-1 win Sunday at Landrex Arena.

Beaumont finished with a pair on the power play.

Ryan Denton of the Jets scored in the opening minute of the second.

Shots were 18-4 in the first and 39-24 overall as Luke Hall went the distance in his fourth start in a row.

The fourth win in a row for the St. Albert Gregg Distributors Sabres was against the defending Alberta Major Bantam Hockey League champions.

The Sabres (4-1) ended the game with five unanswered goals in the third period.

The night before at Go Auto Arena, the Sabres defeated the Sherwood Park Flyers 3-1 on goals by Sundar, Carmelo Crandell and Hayden Selin (power play).

Crandell and Ashton Hutchinson lead the Sabres in points with eight and Crandell is the top goal scorer with five.

The next game for the first-place nitro north division team is Thursday against the Canadian Athletic Club at 8:15 p.m. at Callingwood Twin Arenas.

The second straight win to go with two ties was Monday’s 5-2 decision against the Canadian Athletic Club (0-3) at Callingwood Twin Arenas.