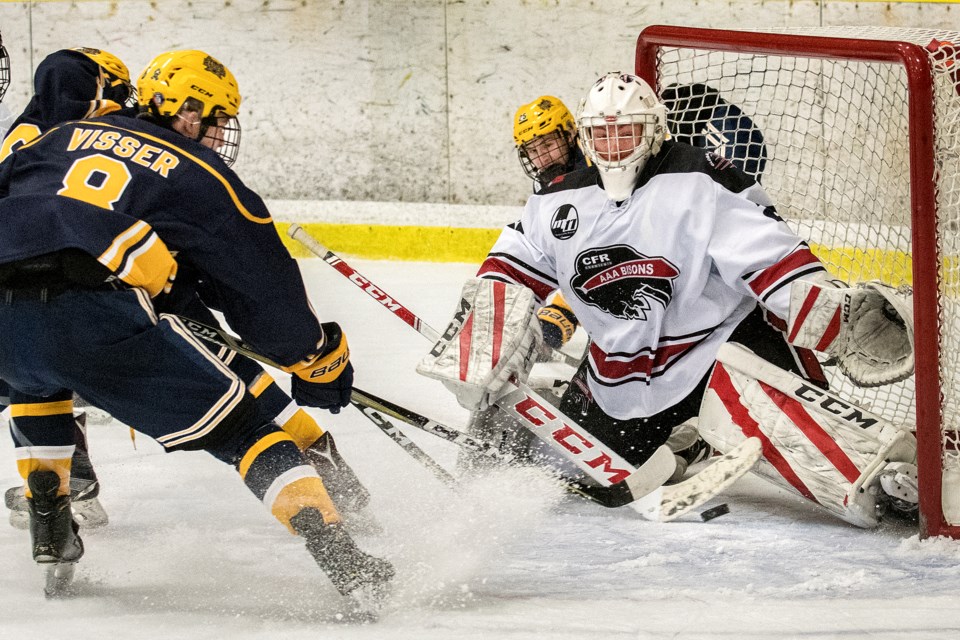 SHOOTING TO SCORE – Chase Visser goes five-hole against Garrett Fuller of the Airdrie Bisons for a first period power-play goal in Sunday's midget AAA game at Jarome Iginla Arena. The St. Albert Nektar Raiders are 3-0-1 after the 4-3 victory. The day before at Bill Hunter Arena, the Raiders settled for a 3-3 tie with the Canadian Athletic Club. DAN RIEDLHUBER/St. Albert Gazette

Scores were 4-0 against the Rocky Mountain Raiders (0-1-3) in Dewinton and 4-3 against the Calgary Fire (3-1) for the three-time defending Esso Cup midget AAA national champions.

Mabel Maltais (2-0, 0.96 GAA) faced 16 shots against the Raiders for the team’s second shutout in as many games.

McDonald, Cassidy Rhodes, Jaden Bogden (shorthanded) and Allison Reich made it 4-0 before Calgary scored with the man advantage at 13:09 of the second period.

This weekend, the Slash are in Minnesota for the NIT tournament and the next league game is Oct. 26 against the Red Deer Chiefs (0-3) at 7:45 p.m. at Go Auto Arena.

The third win in four games was Sunday’s 4-3 decision against the Airdrie Bisons (0-4-1) at Jarome Iginla Arena.

Koehn Zimmer’s second goal of the game, an unassisted effort in the third period, the fourth in two days and fifth of the season was the winner after the middle frame ended tied at two.

Shots were 36-31 for the Bisons as Andreai Proctor-Ramirez (1.33 GAA, one shutout) recorded his third win in as many starts.

The Raiders were coming off Saturday’s 3-3 draw as the Canadian Athletic Club (1-1-2) potted two unanswered goals in the third and the tying marker was scored shorthanded with 5:52 to play at Bill Hunter Arena.

Reidy tallied once and Zimmer’s second goal came on the power play as the Raiders finished with 34 shots.

Saturday the Raiders and Bisons meet again at 7:15 p.m. in Airdrie.

The St. Albert Merchants can make it a season-high three wins in a row Friday in the Capital Junior B Hockey League.

Faceoff is 8:30 p.m. against the Stony Plain Flyers (6-3) at Glenn Hall Centennial Arena.

The second victory after three losses for the Merchants was Sunday’s 4-2 road decision against the Wetaskiwin Icemen (4-4).

Ryan Cooper’s three-point night included two goals and his seventh of the season was produced on the power play to make it 2-1 early in the second period.

Cooper is tied for second in CJHL scoring with 18 points.

The next home game is Sunday versus the Beaumont Chiefs (5-2-1) at 8 p.m. at Jarome Iginla Arena.

Four unanswered goals on 13 shots in the first period by the St. Albert Gregg Distributors Sabres were more than enough to defeat the Leduc Oil Kings on Sunday.

The Sabres (5-2) remain in top spot in the nitro north division after the bounce-back game following Thursday’s 7-4 loss to the Canadian Athletic Club (2-1-4).

Carmelo Crandell continues to lead the Sabres in scoring with seven goals and 14 points, followed by Tyden Redlick’s five goals and 10 points and Ashton Hutchinson’s eight assists and 10 points.

Game time is 8 p.m. against the SSAC Bulldogs (3-0-1) at Terwillegar Community Recreation Centre.

The midget 15 Flyers (3-0-2) are winners of three straight after Saturday’s 3-2 result against the Lloydminster Bobcats (4-2) in the Border City.

Mason Comeau scored the go-ahead goal in the third period after Liam Cochrane and Eric Ceh (power play) lit the lamp in the first.